The gospel according to Mark Millar MANILA, Philippines – It is no sin to think that a Mark Millar celebrating the mass exists in an alternate universe. The Scottish comic book writer did pen stories about necrophilia, scripted bad-mouthed characters and authorized a marriage of two male superheroes.

But in Earth A or Earth Prime, depending on what you would like to call our universe (where no superheroes exist), the renowned writer of violent comics-turned-big time movies, Kick-Ass and Wanted, is an ordained lay minister. Millar is a practicing Catholic and he never curses like his characters do, an alter ego that is far different from his comic book persona.

“I am not saying ‘Hey, people should sleep with their sisters’,” the Scottish writer giggles as he explains why he wrote twin superheroes Scarlet Witch and Quicksilver in a relationship that was meant to “creep out readers” of The Ultimates, a modern re-telling of The Avengers and also a source material for the Marvel Studios films.

But Millar is quick to reason that he only showed the twins on-panel reading poetry to each other and Quicksilver jealous of guys talking to his sister. “You never actually see them sleeping together; you only get a creepy feeling about them,” defends Millar. The succeeding writer of the series, Jeph Loeb, explicitly wrote that the two characters were in an incestous relationship, though.

“I wanted to show that they’re human. The Ultimates have interesting personalities like Captain America feeling lost because it’s no longer 1945 anymore and Tony Stark (Iron Man) who is an alcoholic womanizer,” Millar says.

Millar, who flew to the country for the signing event Milla in Manila, also established gay couple Apollo and Midnighter, the Superman and Batman analogues in his critically acclaimed The Authority series. In another comic, Supercrooks (which he co-created with Filipino superstar artist Leinil Yu), a group of American super villains settling in Spain blackmails a gay superhero into helping them. Genesis of a Catholic geek

But a faithful fan of Millar should know that he does incorporate his faith in his stories. In fact, his first  published comicbook series, Saviour, is about the second coming of Jesus Christ as a superhero. Only this one is revealed as the antichrist in disguise.

At that time, writing became an economic imperative for Millar. His mother died when he was 14, and his father 4 years later. He had to drop out of the university to bring up his brother.

“I really needed the money at that time because I was living on my own, I had no cash. I got US$400 for my first story and I couldn’t believe it. I was so excited that I could pay my bills,” Millar narrates.

Biblical subtext is also found in Superior, another comic book series he co-created with Filipino artist Yu. Superior tells the story of a 12 year old boy with multiple sclerosis being tempted by a demon to sell his soul and grants him Superman-like abilities to save other people’s lives. 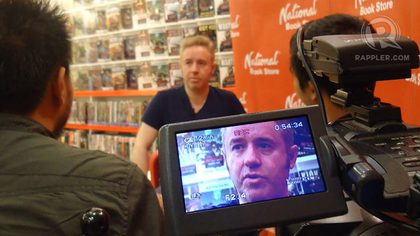 His most blunt love letter to his faith may be American Jesus, a story where a 12 year old boy learns that he is Jesus Christ and hides in Scotland in preparation for his battle against the antichrist. Flashing a mega-watt smile, Millar calls it the “comic version of the Book of Revelations.”

While other comic book writers opt to take a shot at Catholicism and Christianity, in general, Millar has decided to take a different path.

“Sometimes you get stories about religion, mainly to attack religion. It’s something that if you’re a Christian, you won’t be happy about. So the American Jesus comic is something Catholics would like,” says Millar.

“As a Catholic myself, I liked it. You know, a priest told an introduction to the book,” he adds.

Superior and American Jesus are published under his creator-owned line, Millarworld, a company he created after Stan Lee, creator of X-Men, Spider-man and the Avengers, asked him why he was not creating his own characters.

“Mark is one of the best things that ever happened to my career,” Yu says. “Definitely, one of the nicest people I’ve met and an immense joy to work with.”

Supercrooks inker and Eisner nominee Gerry Alanguilan adds, “Nakakatuwa naman nagpunta siya rito kasi  (It is amazing that he went here because) we always wanted to see the writer so we can better relate to him professionally.” Superior and Supercrooks, both co-created by Yu, will hit the big screens in the near future, adding another Filipino stamp on Hollywood.

“The Philippines has a trapestry of great artists, but Leinil has been the biggest one. I’ve been a great fan of Leinil since 1998. I wanted to work with him then but then he went to DC (Comics) when I was in Marvel so we couldn’t work together for years,” Millar says. “But I’ve worked with him for 3 years now and he’s one of my absolute favorites. He’s one of the three best comic book artists in the world so it’s an honor to work with him.”

The glitzy stature of Millar now might blind you, but he says that he’s also had his share of setbacks. He had received a 5-page rejection letter from DC Comics when he was still pitching story ideas. When he became a writer of Swamp Thing under Vertigo Comics, the title was cancelled due to low sales.

His advice to aspiring comicbook writers: “Get the work done. Everyone can say ‘Hey I  have a good idea for a book,’ but you have to type it to let people see it before you can sell it. Even it means writing 5 pages a night after work.”

In his video message to RAPPLER readers (below), Millar puts great emphasis on the importance of reading. “I’m here to tell you to keep reading, not only to keep me on a job — although that is good thing — but, also, it makes life a lot richer,” he says.

“Reading, in a way, is more fun because all (the action) is happening in your head,” he says in his thick Scottish accent.

Amen to that! – Rappler.com