In ‘Manhid,’ superheroes in the PH fight for the greater good Facebook Twitter Copy URL
Copied
Set in an alternate reality of the People Power Revolution of 1986, a generation of superheroes is born in this rock opera

MANILA, Philippines – Every superhero has a breakout moment—like the day Spiderman caught his first crooks and landed upon the front page of The Daily Bugle, so to speak.

A new project applies that from a Filipino perspective.

Before he went on to direct the internationally acclaimed, groundbreaking independent film Ang Pagdadalaga ni Maximo Oliveros, Aureus Solitos authored and composed music for this. Before they went on to become the multi-platinum album-selling iconic rock band that defined the songs of an entire generation, the Eraserheads performed the music for this rock opera. Before he became the artistic director of Ballet Philippines, directed numerous highly acclaimed films and plays, and became a prime exponent of contemporary independent dance in the the Philippines, Paul Morales directed this. This is Manhid, a rock opera that first premiered at the steps of the University of the Philippines’ Palma Hall in Diliman in 1991.

It brought to life a conceptual three-part comic book story that was inspired by Salman Rushdie’s Man Booker Prize-winning fantasy novel Midnight’s Children, itself a story that fuses the birth of his nation with that of mutant characters born with great powers.

Ambitious for its fusion of multiple artistic disciplines and genres as well as for the breadth and scope of its story, Manhid proved to be a success with audiences. People still remember today how the musical rocked their world.

Now, Manhid is set to return to the stage after 24 years on February 20 to 22, February 27 to March 1 and March 6 to 8 at the Cultural Center of the Philippines’ Main Theater. But this time, Manhid has changed further – it’s acquired even more super powers.

Joining the league of super talents originally comprised of director and choreographer Morales and writer and composer Solitos are the ballerinas and danseurs Ballet Philippines, the nation’s premier dance company; a wealth of theater actors acclaimed for musicales from various theater groups such as Tanghalang Pilipino, 9Works, Philippine Educational Theater Association (PETA); and internationally acclaimed jazz funk rock band Radioactive Sago Project, who will be performing the music live.

Manhid is set in an alternate reality where the People Power Revolution of 1986 against the Marcos dictatorship fails instead because of the people’s apathy, hence the title.

Instead, a tragedy known as the Masaker ng Taong Bayan occurs. In protest, people name their newborn babies birthed at the time of tragedy after the country’s ancient mythological heroes. As they come of age, the children from this generation of heroic namesakes find themselves imbued with special powers. This super-powered young ones are recruited by two opposing camps. There is the valiant league of heroes who call themselves Maragtas, jointly led by tabloid writer Bantugan Buenaventura, named after the hero of the Darangen, who has the power to enter the dreams of the gifted youths, hence his superhero monicker “Taginip.”

There’s also feminist activist Lam-Ang Panganiban, daughter of the slain journalist who called on people to name their newborns after legendary heroes. She’s also known as “Amihabagat” for her power to control both the gentle Amihan winds and the violent Habagat storms. Joining them are: Alunsina Albano, a child of the slums named for the goddess of creation in Panay mythology, otherwise known as “Mura-dugo” for her power to draw blood from whom she curses; Part of the cast also are Gawigawen Santos or “Ang Babaylan,” the mystical priestess shaman; Urduja or “Diwata ng Gabi,” who commands insects; Dilim or “Itim-Awit” whose sad songs darken places wherever they are heard; and Lagrimas or “Lunas-Luha” whose tears are a panacea. Opposing the Maragtas are the super villains who call themselves Tulisan ng Bayan, controlled Mamalhim-ma, aptly named “Demonyita,” who also serves the dictatorial government as its Minister of Humanity. Recruited to do her evil bidding from among the gifted generation are: General Apolaki Regalado, named “Sibat-sindak’ for his spear that can turn anyone’s fear into reality, Radya Indarapata Evangelista is “Mata Balani” for his power to assume the guise of the person someone desires most; Mayari or “Anino-nino,” a puppet master who controls shadows; Sidapa, otherwise known as “Laway-lason” for the venomous spit he fires using a blowgun; Gonongleda, so named “Patay-pindot” for her vampiric touch; and Rasagadang, otherwise known as “Mangkukulam” for her power to torture using voodoo dolls. 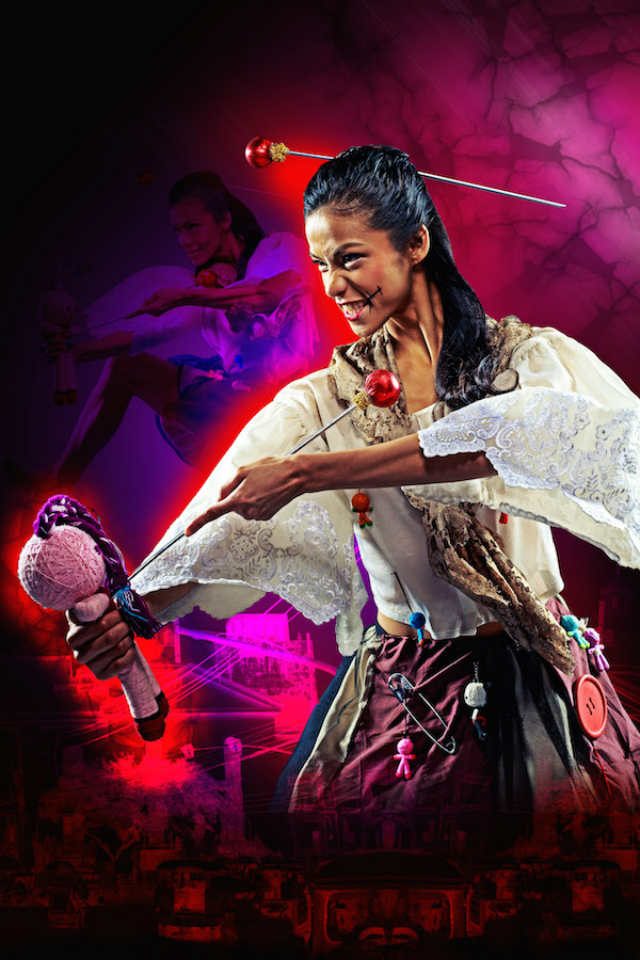 Bringing these colorful characters to life are many of this generation’s most seasoned theater actors, many of whom have have appeared in pivotal roles for successful musicales such as Rak of Aegis, Rent, Noli Me Tangere the Opera, Lorenzo, Collection, and Ang Huling Lagda ni Mabini, to name a few.

Tag-inip is played by Sandino Martin. Playing Amihabagat are Regina de Vera and Teetin Villanueva. Mura-dugo, Allunsina, and Urduja are brought to life by theater actors Gold Villar, Kim Molina, and KL Dizon, respectively. Dilim is played by soprano Jean Judith Javier while Lagrimas is played by Ronah Rostata.  Demonyita Mamalahima is played by theater actor Mayen Estanero. Alternating in the role of Mata-balani are Fred Lo and Ricardo Magno.

The danseurs and ballerinas of Ballet Philippines who won have acclaim for their flawless performances of Cinderella, La Revolucion Filipina, and Giselle lend this rock dance musical their virtuosity.

The multitude of characters, each with both a real name based on indigenous legends and a superhero monicker in Tagalog, as well as the adherence to the lengthy three-part comic book story of the original, may make it challenging for some audiences to follow the story.

This rock dance musicale is a little over two hours with two intermissions between the three acts. Thankfully, director Morales and writer Solitos, also called “Kanakan-Balintagos,” are not only veteran storytellers versed in tempering their own works, but are also savvy collaborators, employing the skills of dramaturge Rody Vera to further hone their original story for today’s audiences.

Bringing to life the music penned by Solitos and collaborators Vincent de Jesus, Carina Evangelista, and the Eraserheads this time around are no less than the funky and exciting Radioactive Sago Project with their very own Francis De Veyra as musical director.

The band’s experience in playing` improvisational jazz to accompany extemporaneous spoken word will serve them well in providing music for a live theater performance.

Rising to the challenge are costume designer Victor Ursabia, the MP School of Makeup Artistry, lighting designer Roman Cruz, and set designer Zard Eguia. Collaborating to craft the choreography with Morales is Alden Lugnasin, former artistic director of Ballet Philippines. “In this show there will be a lot of multimedia,” reveals Morales.

Now, 24 years after it premiered onstage, Manhid will be brought to life by a new generation of actors and dancers, some of whom were yet to be born when the rock musical debuted. And yet the cast reveals that the dance musical deeply resonates with them.

“My character’s Bantugan. I’m the dreamer. I think in our reality now, our society is not yet perfect. We still have a lot of things to do, to accomplish. If we can dream about it, we can do it. It’s very relevant to me. We have so many issues. I feel at some point we are becoming apathetic. Issues such as corruption are becoming normal. It’s so hard to fight it. I feel this show is a wakeup call for our generation to fight it,” says Martin.

The epic battle between good and evil draws near. And it happens in Manhid, the Pinoy Superhero Musicale. – Rappler.com