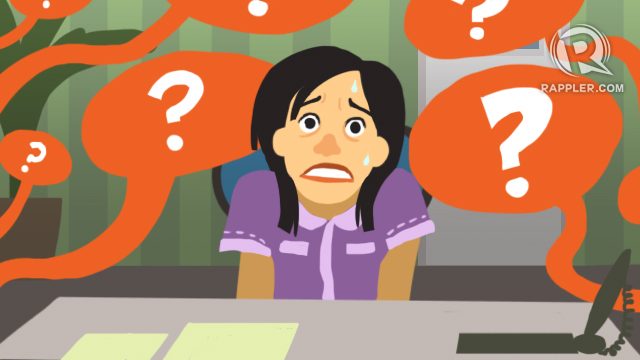 MANILA, Philippines – A job interview isn’t just about a set of questions and a perfect set of answers. Nerves, tension, timing, moods – all of these play a part in how this might turn out. (READ: 5 important tips for a great job interview)

The following are 10 questions tweeted to Rappler during a recent Twitter conversation called #ScaryInterviewQuestions. A few suggestions for answers are also below, particularly from Apprentice Asia winner and Rappler columnist Jonathan Yabut (follow him on Twitter or Facebook), as well as professional coach and HR practitioner LA Cruz.

#ScaryInterviewQuestions “Tell me about yourself ” this make me sick. How to answer huhu @rapplerdotcom

Let’s start off nice and easy with this seemingly innocuous question. It’s tricky – be too general and you’ll appear vague or safe, be too detailed and you might throw the interview off-track.

With a question like this, your best bet is to be fully prepared with your answer way before the interview, since you know there’s a good chance it’ll be on the roster of questions. “Highlight your strengths and leadership attributes and value you can bring to the company,” says Coach LA.

This was one of the more popular questions raised real-time. Talking about a weakness is tricky. The safe route might be to go with something completely inoffensive – like the cliche “I’m a perfectionist, I have to get it right all the time!”

Recruiters know when you answer the question by picking a strength and downplaying it into a weakness, or picking a textbook “weakness.” Call a spade a spade, and describe a true opportunity area.

Sincerity plays a key role here.  Really think about what you need to improve on, identify how you’re getting over it, and if that paved the way for some other skill to be developed.

One might say, for example, that he isn’t a great listener – but discovering that led him to be more conscientious asking for feedback.

“Be honest, not generic, to stand out,” says Kash Shaikh, founder of the Be Somebody movement, a call to action to go out and chase your passion.

Jonathan, LA, and I were surprised that this was one of the most common questions that popped up in this conversation. It’s likely an attempt to gauge how well you react to an unforeseen question.

“We usually ask ‘Why we should hire you?’ and not the other way around,” says Coach LA. “Maybe the interviewer just wants to see how quickly the candidate can think on his feet.”

“@rapplerdotcom: “If you get hired, I will be your boss. What is your initial impression of me?” #scaryinterviewquestions” @eieiSicat

This does feel like another question designed to rattle, doesn’t it? Don’t shrink away. Understand – this isn’t personal. It’s not the best question to ask a prospect, either, but again, they might be looking to observe your reaction. This was another question that popped up during the conversation, and I imagine it would be quite intimidating to answer this, almost as if one were already anticipating a rejection. Just as in the last two questions, remain unfazed – this isn’t personal, and it’s unlikely to be an indication that you won’t get it. (READ: Georgina Wilson to fresh grads: Set yourselves apart, give it your all)

“Show that you have a plan B and that you will continue to pursue other opportunities for growth,” writes Coach LA on Twitter.

The key here seems to be to show both passion and persistence – that you know that you are interested in the field and the industry (not just in that particular company) and that you will keep trying even if you aren’t selected the first time.

@jonathanyabut how do u answer question like “how long do u intend to stay in this job?” #ScaryInterviewQuestions

Don’t be pressured into giving an exact time period. You aren’t getting any assurances or signed deals immediately in this interview – its very nature is exploratory! So don’t feel like you need to commit a hard answer.

Here’s a great answer from Jonathan, tweeted during the conversation: “I intend to stay as long as I’m engaged and productive with my job, boss and company.”

You may not have much experience, but it doesn’t mean you have nothing to offer. “The youth are energetic, more optimistic, more tech-savvy and creative. They will do beyond ordinary means to get something done. These are qualities that make fresh grads an important asset for the company. You cant easily get that from other generations,” says Jonathan.

Skills in navigating social media and new apps, for example, may come naturally to the younger set. If this is true for you, take the extra effort to learn a little more, and you’ll have something to bring to a working world that’s evolving daily at an incredible speed. (READ: 10 work resolutions for your career in 2015)

8. “Why did you leave your last job? or “Why are you looking for another job?”

Employers ask this question to get a clearer picture of who you might be as an employee and the circumstances of your departure from your last job – but they can always check that with your references.

They’re also asking this to determine if you’re someone who might not stay long enough with the company after you’ve been trained.

If you’ve bounced around from job to job and have yet to demonstrate that you can stick with a company for some time, growing while at the same time contributing growth, you’ll have to work a little harder at the interview. In fact, job-hopping was listed in a recent study by Jobstreet as one of employers’ main pet peeves about fresh grads in the Philippines. (READ: #HowIQuit: Jimmy Fallon reads stories about people quitting their jobs)

Like in the question on weaknesses, sincerity is key. “Nothing wrong with job-hopping if you’re after career growth, new roles that excite you, et cetera,” says Jonathan. “People settle down once they find right company offering the best career path.”

Coach LA has this warning: “If [you’re looking] because of other reasons, be honest. Remember, background checks can be done.”

The key is for it to sound real and personal – not canned. A textbook answer might be expected, but it won’t make much of an impact. So practice, but make sure the answer is authentic.

9. “What would make you resign from a company?“

“What are the things that would actually make you leave the company?” @rapplerdotcom #ScaryInterviewQuestions

Just say it straight, without the bells and whistles. It’s intimidating to talk about things that will make you leave when you’re interviewing for a job you really want. But being able to do so eloquently shows a company what you really value – and it’s also good for you to know about these dealbreakers yourself. (READ: 4 undeniable signs that it’s time to quit your job)

Just a few examples from Jonathan: “A bad boss, a company that doesnt value talent development, and a culture of inciting fear versus rewards to make people work hard.”

Coach LA says, “Limited to no career growth/learning will be factors for me to consider leaving the company. This shows your hunger to continuously grow and develop as a professional.”

Before going into how to answer this question, here’s an important fact. Never say “no” when you are asked this question. “There’s no doubt candidates who ask questions have a better chance at landing their dream job,” writes Jerome Ternynck, founder and CEO of SmartRecruiters, on Inc.com.

In that article, he shares the best questions he’s heard from prospective employees, including “What role will I fill?” and a follow-up, “Why does this role matter to the growth of the company?”

Don’t ask the question for the sake of filling in that dead air. There must be something you really would like to know. Is this role old or new? What’s the company doing differently than others? What’s the company’s stance on an important issue that directly impacts them?

Here are a few examples from Jonathan:

Aside from all this, you should be ready to describe situations in your working or student life, including your proudest achievement, a time you disagreed with your teammates, the biggest challenge you encountered in a project, et cetera. In these cases, establish the necessary backstory, briefly say what you did, and most importantly (linger here) – discuss the results.

Keep the energy up – the interviewer will sense tension and nerves (a wet handshake, a too-soft voice, for example) and that might set the tone.

The conversation should flow between two people, so embrace spontaneous moments – the bits where humor and lightness peek through.

The company is sizing you up – but you are also sizing them up. Twitter user Goldie Manalili (@goldiemiers) puts it succinctly: “Just talk with full sincerity and don’t be overconfident.”

So does user Adrienne (@aidz03): “Remember that an interview is still a conversation. It’s an opportunity for you to get to know your potential employer.”

Keep this as a guide, but ultimately, your answers to these questions should come from you. Anything else might sound artificial. Your dream job, or even your first job, deserves better, and so do you. – Rappler.com