Becoming Mabini: Delphine Buencamino on theater and playing a hero 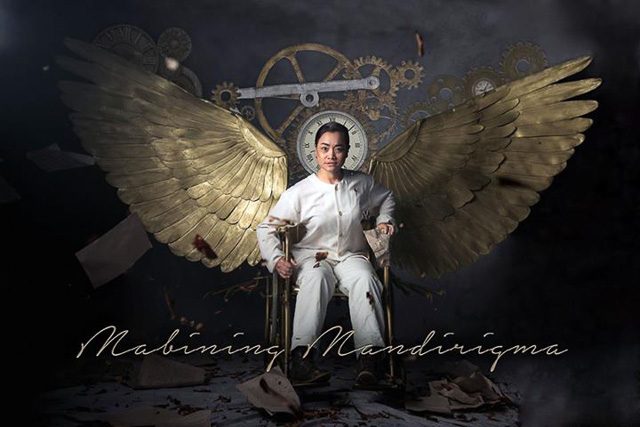 MANILA, Philippines – Walking into the café in late June looking for Delphine Buencamino, I already expected to be met by a woman wise beyond her years, with all the magnetism and volume of a theater actress with her experience. I ended up being completely correct.

She sat tall with her dancer’s poise, poring over the script of Mabining Mandirigma – the blond streaks in her hair making her stand out even more.

At once I was struck by the gravity of her presence. A deep, clear voice, serious eyes, and something intangible I can’t identify all draw me to this present moment.

At least 10 memorable characters played on different stages with different Philippine theater companies, a couple of film roles, a few choreography credits to her name, awards for artistry, and a recent artist residency in New York, all at the age of 24.

In a June 26 interview, Delphine says all of this happened because her young teenage self wasn’t up to the task of waking up early just to try and get into the University of the Philippines Rural High School and landed in the Philippine High School for the Arts instead.

The short time she spends telling me her story is full of these little remarks essentially expressing that her life’s dedication to theater was a conscious decision, but it wasn’t a hard one.

The eldest daughter of theater veterans Nonie Buencamino and Shamaine Centenera-Buencamino and older sister of the late teen actress Julia Buencamino, as well as two younger brothers Gregorio Martin and Jose Antonio, Delphine had been at home backstage since before she even realized what her calling was. Her youth was littered with declamation contests, workshops, and encouragement from her family – so much so that when asked why she decided to study theater arts up in the sanctuary of Makiling versus studying at the UP Rural High school, she laughs again. “That night we had a barbecue and if I chose UP Rural I had to wake up really early. That’s the joke I like to tell myself. I didnt really think much about it, it was a no-brainer.”

Her first semester in Ateneo de Manila University was the only time she wasn’t in the theater and recalling it, she says it was an experience much like a breakup. “You know when you do something so much and then you don’t do it? You miss it.” Since that one single period of experiencing life without the stage, she’s been working non-stop.

The road to the present has been filled with roles she’s loved and owned like Juli in Isang Panaginip na Fili, Zafira in Orosman at Zafira, Oryol and Ibingan in Ibalong, and Salve and Lavinia in Titus Andronicus.

Having proven that she can stand on her own two feet, Delphine is slowly raising the bar when it comes to what people can look forward to when it comes to her art. During her artist residency under the Asian Cultural Council, Delphine explored something she dearly wants to bring to the Philippines’ theater scene: physical theater.

She describes it as storytelling through words we can perceive, and through a shared stream of consciousness that only the body can understand.

To start something like this requires an artist to invest time, money, and resources. Take it from Delphine, “Definitely you’re not going to make money. You’re even going to spend for it. So it has to be something you totally believe in.”

If we see physical theater happening in the country, we can look to Delphine and see if it was her passion for it that manifested it onto the scene. Most likely, we’ll see her somewhere in the wings, if not the stage. These days, Delphine has been pouring herself into a totally new kind of role for her. She’s playing the leading man of Tanghalang Pilipino’s 29th season opener, Mabining Mandirigma. Yes, a woman is playing the paralytic national hero, Apolinario Mabini.

She says she didn’t choose the role, the role chose her. Handpicked by director Chris Millado, she says his answer to why a female actress was, “Why not?” Part of the reason why she finds herself playing a male role is because the team wanted Mabini’s voice to stand out high and clear amidst all the chorus – an auditory metaphor for how powerful the man’s ideologies were.

While most would believe the difficulty comes in being a young woman playing an older figure of great national respect, she says the gravity of the challenge comes in playing the hero as a real person. “Are you feeling any pressure right now? I’m talking to you and I’m thinking ‘oh my god, oh my god, oh my god.'”

He was the first Prime Minister of the Philippines, the adviser of Emilio Aguinaldo, and the first Cabinet President of the Republic of the Philippines. It would be easy to portray him with the archetype of the statesman and hero but pondering on it, Delphine shared, “When you’re alive, and you are in a situation. you don’t think of yourself as a hero… I don’t think he thought of himself as a hero. He was a very intelligent person who couldn’t get what he wanted even when he left like he was getting somewhere, there was a setback. His life was a constant series of setbacks.”

In the playwright’s notes posted on Facebook, Nicanor Tiongson echoes the sentiment of the deep reality that was Mabini’s struggle. Tiongson says the problems he faced as a leading member of Aguinaldo’s government are “exactly the same as the problems our country faces today.” Feudal patronage, private armies, the reign of strongmen, the use of violence against innocent officials, and the passing of laws for personal gains – all these problems Mabini confronted more than 150 years ago still exist today.

“Mabini patiently confronted Aguinaldo and fought the Paterno clique and urged them to think beyond the narrow considerations of tribe, class and personal aggrandizement and follow the larger goal of serving the people and building an equitable nation… In this sense is Mabini a hero for our times, for a country whose leaders have continually betrayed the people’s interests for their own material gain,” Tiongson explains.

To communicate what Mabini stood for during a lifetime spent in the revolution, Delphine and the rest of the cast are set to deliver a potent musical enlivened against a steampunk background. They sing of his warrior spirit and of the truth that his kind of integrity cannot and should not die.

Theater for the Filipino people

An actor’s job is to adhere to the truth of the story you’re telling.

“Your job is to read the script and fill in the blanks. That’s where your creativity comes in.” This creativity isn’t as spontaneous as we’d think. Without the audience really being aware of it, their weeks and months are consumed by research, studying scenes, owning emotions that are not their own and constant repetition and practice. To do it any other way, to do it half-heartedly, Delphine believes, is to have “no respect for what happens inside the theater.”

There’s never just one way to do things on stage and the exploration of a character “can’t set sail on just talent.” Speaking to Delphine, one realizes that the real sacrifice actors make isn’t their time or their energy, it’s themselves. “You can’t hide any part of yourself when you’re in the actual performance. It’s a very delicate kind of vulnerability.”

And Delphine isn’t one to take these sacrifices lightly. Playing a role you don’t believe in is “like hitting your head against a wall.” When she gives herself to a role, she asks herself, “What is this all about anyway?”

Just as she’s doing with Mabining Mandirigma, Delphine hopes that each time she comes onstage, she is able to give voice and body to original Filipino creations that aren’t just for entertainment.

“Personally I’d like to do work that celebrates Filipino culture in some way or that questions society in some way. I think that’s more fulfilling… Pakiramdam mo may na-contribute ka talaga.” (I like doing original Filipino plays. You feel like you’re really able to contribute, as an actor.) Sitting down doesn’t have to be just for entertainment, it can be for education and it can be about knowing the identity you share with the person sitting next to you.

The way she speaks about it, it’s not hard to see actors, playwrights, directors, and other theater artists in the same light she sees them: ambassadors for the Filipino.

It’s no wonder then that Delphine, in all her pride in her work, is the woman who will be becoming Mabini and bringing his integrity back to life.

Mabining Mandirigma will run at the Cultural Center of the Philippines’ Tanghalang Aurelio Tolentino until July 19. Catch it Fridays to Sundays either on a 3 pm matinee or an 8 pm evening gala show. – Rappler.com