Apr 23, 2020 4:17 PM PHT
Gaby Baizas
Facebook Twitter Copy URL
Copied
'I, as a citizen, no longer feel safe in my own country,' says one netizen 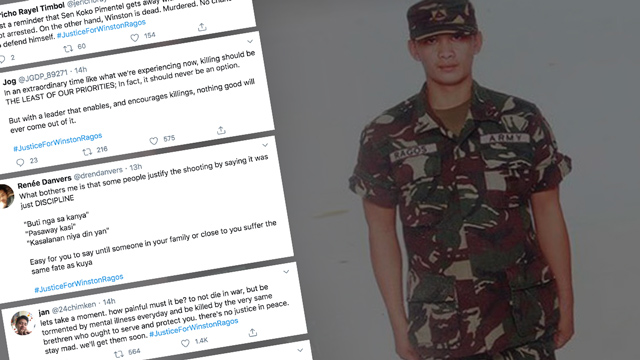 MANILA, Philippines – Filipinos online demanded justice for Winston Ragos, the soldier who was killed by a cop in Quezon City over quarantine rules on Tuesday, April 21.

On Thursday, April 23, Ragos’ mother Merlyn said his son, a Marawi siege veteran who was not mentally stable, would not have been killed if the police only managed the incident better – a sentiment shared by many others. (READ: Winston Ragos’ mom to Duterte gov’t: Coronavirus is the enemy, not my son)

Ragos was formerly enlisted with the Army until January 2017, and had suffered schizophrenia and trauma from “war shock.”

Earlier this month, President Duterte ordered cops to “shoot dead” unruly violators of the enhanced community quarantine, which some netizens linked to the unfortunate killing of Ragos.

Many netizens also chided those who blamed the soldier’s family for not keeping him in the house, and those who believed that the killing was justified since Ragos violated quarantine rules.