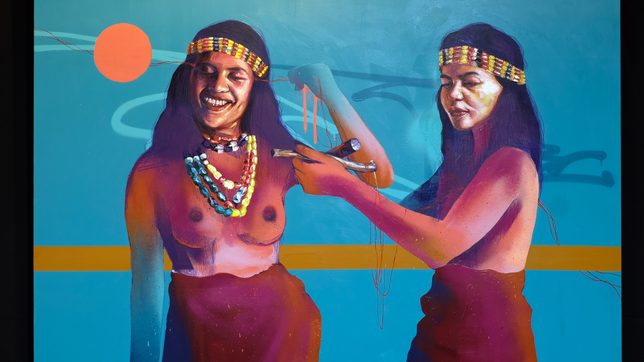 This year’s contemporary art exhibit for the 2021 Ibagiw Creative Festival “challenges the audience on what they believe in” and “triggers strong emotions” about the everyday realities of life, said Fara Manuel-Nolasco.

The University of the Philippines-Baguio Fine Arts professor is this year’s appointed curator for the exhibit. She said the arrangement of the artworks would be “challenging the audience on the things they believe in” right from the start of the tour.

The show’s title, Alimuom (petrichor), pertains to the “earthy scent that comes out after a gentle rain.”

“The gentle rains inspire spaces of comfort, spaces of nostalgia and care, and somehow it relates to the fragile ecology that we are beset with,” she explained in the video introduction for the show.

During the November 24 interview with Rappler, Manuel-Nolasco said many pieces on display were created specifically for the exhibit.

“This made [the art pieces] resonate more to the overall flow of the works. They started from scratch, read the theme, and reflected on it,” she added.

According to her, the degree of independence the organizers gave ensured that every section delivered a unique message, that each work “would occupy a space and allow an isolated experience but cohesive for each and every piece on display.”

This year’s works came from 67 artists and groups from the region, and those practicing outside of Cordillera but with connections to highland culture.

Manuel-Nolasco said that the exhibit reflects what a creative city should promote: “We [being] very open when it comes to art and expressiveness.”

Manuel-Nolasco wants the viewers to look at the show from two perspectives. “It may affect you badly or soothe you,” she explained.

“The works here take [on] a double meaning. Like in the case of strong statements about society, it may hurt others,” she said while showing the works displayed at the entrance by Aguinaldo, Alfonso Dato, and Bumbo Villanueva, among others.

She pointed out that the everyday reality encountered by the artists triggers strong emotions.

“[This is why] there are works reflecting the good about society, and there are also works reflecting the bad. Many have political sentiments but some also show the internal feelings and consciousness of the artists,” Manuel-Nolasco elaborated as she showed the Human Condition Alley, featuring the works of Allan Manalastas, Jandy Carvajal, and Angelo Aurelio, among others.

She said that Baguio and most artists from the Cordillera have a way of connecting their unique techniques to the culture and traditions in the region. She cited the works of pyrographic artist Jordan Mang-osan, impressionist Roland Bay-an, and muralist Venazir Martinez.

Manuel-Nolasco added that they also find artistic use for everyday things like De Guia’s use of dried fish for his installation art, the soil art of Rochelle Bakisan, the use of coffee by Patric Palasi, pyrography on compressed rice hulls by Julian Almirol, and betelnut stains by Ronald Dulay.

She also noted that entries like those by Bong Sanchez and Rene Aquitania highlighted “the native tradition of finding objects around the natural environment and [having them become] part of their work…these materials from the past used in the present.”

“The materials speak about the place and origin [of the work] when you bring them to other places,” she explained.

Among the works she mentioned that “have their own life and story” is “Kapag Umaklas ang Masa, Babagsak ang Pasista,” which activists used during the 2020 Human Rights Day protest in Baguio. Besides this work, the exhibit also features an artwork from Ugat Lahi Collective, which the curator considers “one of the controversial pieces” on display.

“This is bringing protest art into exhibits and galleries; this is [the artists] bringing their practice in street protests,” she said.

Connections from the past

Besides the artworks, the exhibit also features archival documents about the city’s arts and culture development. The CCP lent their archives to the Baguio Arts Festival and the Baguio Arts Guild (BAG) for this.

“This is not something that is practiced in exhibitions and festivals, but this is our effort to connect the ongoing festivities [to this] place,” Manuel-Nolasco explained, referring to the Baguio Convention Center (BCC) where the exhibit is held.

It is a place that is “instrumental in the molding of the Baguio contemporary art scene,” the curator added. “Many ideas were born here.”

The Ibagiw Creative Festival, now in its fourth year, is the city’s effort to promote and develop its status as a Creative City of Crafts and Folk Art, as conferred to it by the United Nations Educational, Scientific, and Cultural Organization (UNESCO) in October 2017.

The city is also seeking to declare the BCC basement as a gallery. The proposed ordinance said it would house “works created by independent artists or artists working in conjunction with [the] arts community and organizations” in the city.

In a November 24 interview, Baguio tourism officer Alec Mapalo said this year’s celebration is a follow-through of last year’s effort to reformat the event to adapt to the COVID-19 pandemic.

“One thing that we are pursuing now is e-commerce. That is a game changer in the conduct of our festival. If that will be sustained every year then we will always have an online platform,” he explained.

Mapalo said they also tried increasing funding for the event. They used to spend P3 million a year for the past few years, but this budget did not materialize this year because of the expenses incurred by the city during the pandemic.

Alimuom, which will run until December 12, is one of several art events simultaneously happening in the city until December. Profiles of the participating artists and the collection are also available for viewing online.

Manuel-Nolasco hopes that with the exhibit, people will look at the festival “beyond a touristic approach.”

“I am hoping that there will be a nudge that this is more than a work of art, more than an artifact but a statement, a voice…[and] as creative city, they would see this not as something destructive but a critique on ways to improve [Baguio] as well.” – Rappler.com