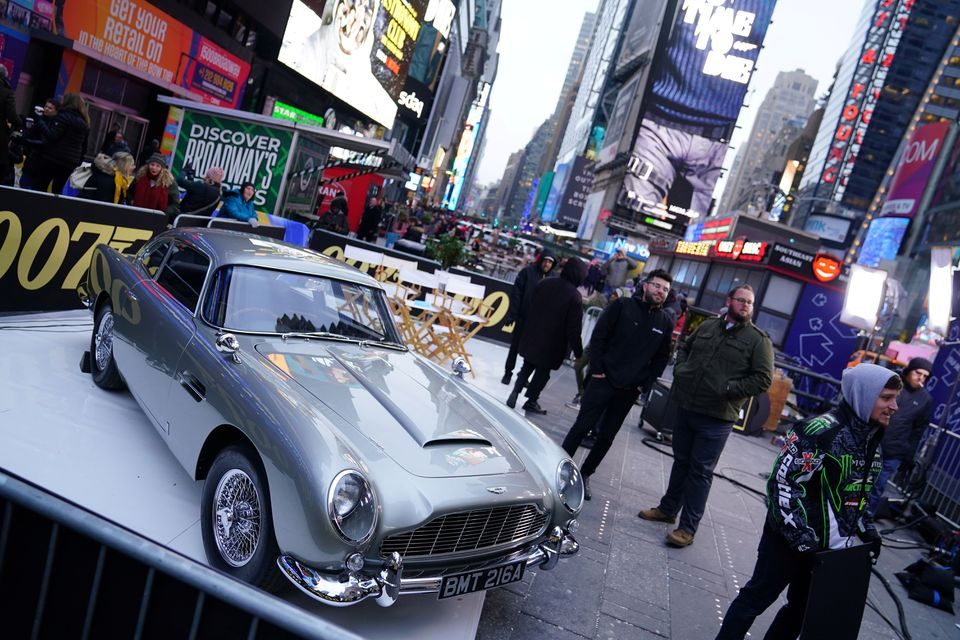 An Aston Martin DB5 is pictured during a promotional appearance on TV in Times Square for the new James Bond movie "No Time to Die" in the Manhattan borough of New York City, New York, U.S., December 4, 2019.

Facebook Twitter Copy URL
Copied
Aside from the auction, various events are also planned to mark the 60th anniversary of the film franchise as Bond fans speculate who will next play the character

LONDON, United Kingdom – From an Aston Martin DB5 stunt car to costumes worn by Daniel Craig in No Time to Die, an array of James Bond props and memorabilia are being offered at a charity auction soon as the film franchise celebrates 60 years.

The two-part sale will be held as a live auction on Wednesday, September 28, and an online auction with bidding open until James Bond Day on October 5 – the date the world premiere for the first film about the suave British secret agent – Dr. No – was held in 1962.

Leading the lots is the car used for some adrenaline-packed stunts in No Time to Die amid the stunning backdrop of the cave dwellings of the Italian city of Matera. With a price estimate of 1.5 million pounds to 2 million pounds ($1.62 million to $2.16 million), it is one of eight replicas built for the movie.

“Externally it looks exactly like the DB5 that we all associate with James Bond, internally (it’s) a completely different beast to be capable of all the incredible stunts and the driving that they did in Matera,” Adrian Hume-Sayer, director of private and iconic collections at Christie’s as well head of the James Bond sale, told Reuters.

Other lots include a signed No Time to Die clapperboard, with a price estimate of 5,000-7,000 pounds, as well as costumes worn by the film’s cast members such as Rami Malek as villain Safin and Lashana Lynch as 007 agent Nomi.

Several outfits worn by Craig in his last outing as Bond also feature, including a tactical costume for his final scenes. It has a price estimate of 15,000-20,000 pounds.

There are also other vehicles, watches and costumes as well as props from different Bond movies.

Proceeds from the two “Sixty Years of James Bond” auctions, with a total of some 60 lots, will go to different charities.

Various events are planned to mark the anniversary as Bond fans speculate who will next play the character.

“Well, right now we’re not thinking about the next chapter yet, we’re just celebrating the release of No Time to Die and our 60th anniversary,” producer Michael G. Wilson told Reuters.

“And I think when this is over by the end of this year, next year we’ll start to think about where do we go from here.” – Rappler.com