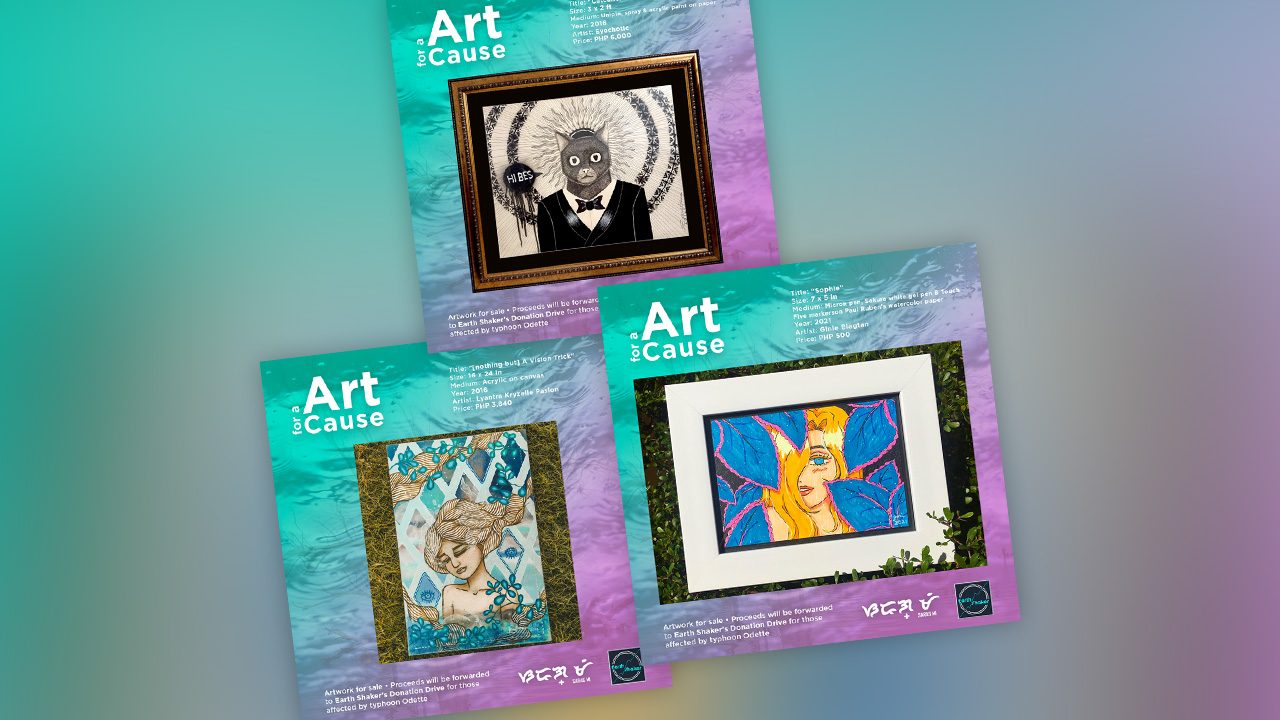 Facebook Twitter Copy URL
Copied
A group of female artists launch 'Art For a Cause,' where proceeds from their artworks will go to the ongoing donation drive for the victims of Typhoon Odette

DAGUPAN CITY, Pangasinan – With the widespread destruction left by Typhoon Odette in the Visayas and Mindanao, people from all walks of life have expressed their desire to help.

Here in Pangasinan, a group of female artists launched a fundraising project for the same purpose.

SARAG MI (Pangasinan phrase meaning “We Can”) recently launched its campaign, ART FOR A CAUSE, where members sell their artworks. Proceeds will be given to the ongoing donation drive for the victims of Typhoon Odette.

Earth Shaker is a youth-led organization that aims to improve the appreciation of earth sciences and empower citizens to make science-based decisions.

The all-female art circle, about to celebrate its third anniversary in March 2022, has decided to assist less-fortunate kababayans.

“We plan to raise P47,960 – the total amount of all the artworks included in our fundraiser. And we will forward the proceeds to our partner, Earth Shaker’s donation drive, to help victims of Typhoon Odette”, said Dela Cruz in an interview.

Dela Cruz said the campaign began when one of the artists, Paulyn Albino, shared Earth Shaker’s ongoing donation drive in their group chat. Another member, Vern Pascual, initiated the idea that the circle conduct a fundraiser.

“Paulyn sent a message to Earth Shaker FB page to inquire about a possible partnership to raise funds. We were happy as we received a positive response”, Dela Cruz said.

As of writing, SARAG MI has already raised P11,000. The entire amount has been forwarded to Earth Shaker.

This is not the first time SARAG MI has conducted fundraising activities.

Dela Cruz said the group has also launched a fundraising and donation drive, where they were able to collect P52,300, which was then donated to frontliners at the Region 1 Medical Center during the surge of the COVID-19 pandemic.

Meanwhile, Christian Calalang, one of Earth Shaker’s co-heads of the donation drive, said they are thankful for SARAG MI’s assistance.

“They are one of our partner organizations in this donation drive. We are actually grateful to have them, and we commend their initiative since they are the ones who reached out to ask for a partnership,” he said.

Calalang said that as of December 27, 7:30 pm, they had raised a total of P130,912.24 in monetary donations. These will also be forwarded to their partner organizations on-ground.

Calalang added they were able to sponsor a two-day community kitchen in 14 areas across the provinces of Palawan, Iloilo, Cebu, Negros, Surigao del Norte, Bohol, and Dinagat Islands.

Individuals who are interested in purchasing SARAG MI’s artworks may click the link to check their online gallery, while Earth Shaker’s transparency report may be found on their official Facebook page. – Rappler.com