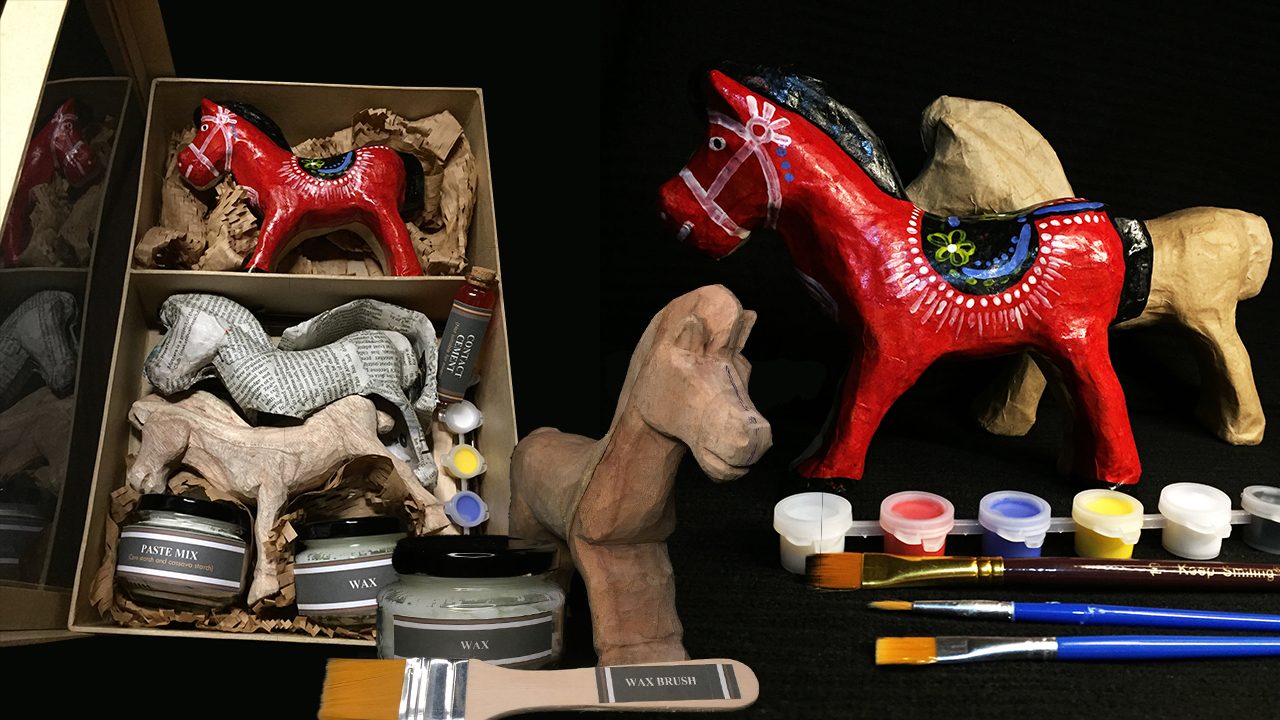 MANILA, Philippines – When you open Takang Paete’s DIY taká kit, the first thing you’ll notice is the bright red horse. Next to it, you’ll find the exact same shape, but made out of wood this time – the molde, or mold.

The rest of the contents are things you’ll need to make a taká, Paete’s famous papier-mâché art: newspapers, paste, a cutter, paints in bright colors. You may not know how to use all of it yet, but the instruction guide will take you through the process step-by-step.

Packed neatly in a box, these takás-in-the-making look like the perfect pandemic pastime – and it could be if you get your hands on one of the kits.

More than that, each kit continues the story of a time-honored craft that helped keep the economy of a small lakeside town in Laguna afloat.

The kit is the project of Paete native Gian Adao and his siblings, and curated by their parents, Ka Jong and Ka Ichu.

Ka Jong and Ka Ichu are seasoned taká-makers or magtatakas, and like many people in their town, the craft has been their livelihood for decades.

Paete, whose name means “chisel,” has earned a reputation for its wood carving industry – so much so that it has been dubbed as the “carving capital of the Philippines.”

But Paete’s economy is built not only on wood, but on newspaper and paste. The taká industry was once so alive that Gian’s parents turned to it when they needed a stable source of income as young newlyweds in the 1980s.

At first, they tried making money off selling wooden balusters. Later on, they opened a sari-sari store but had to close down after a year. Nothing quite clicked, until Gian’s mother found taká.

She had heard of taká before but hadn’t really considered it until she came across someone setting up wooden molds outside a taká workshop. She then entered the workshop and asked if she could apply to be a magtataka.

(I had already heard that income was good with taká.… Especially before, taká was expensive. Materials were cheap, the selling price was high, so it was good business.)

How a wood-carving town came to thrive on papiér-mâché turns out to have been a matter of necessity. Where wood carvings were too heavy, taká had taken their place.

As the taká origin story goes, a couple in charge of decorating the church for Christmas found that the wooden nativity scene they used would fall over because of its weight. As a solution, they decided to mold paper figures out of the wood carvings, which is essentially how taká is made to this day. 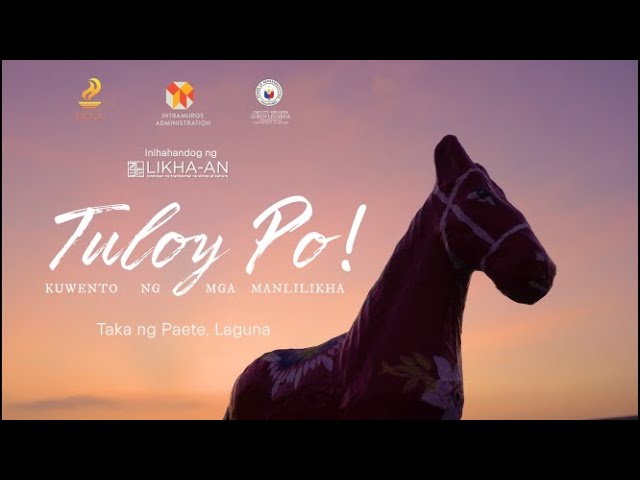 Taká making is a family affair, or at the very least, a two-person job.

“Following the typical set-up for most magtatakas in Paete, Mama was the main magtataka, while Papa took charge of the pagda-‘dryer’ (placing and sort of ‘monitoring’ the taká in make-shift ovens),” Gian told Rappler.

Besides making the product, Ka Jong and Ka Ichu were also partners in business. They brokered deals between buyers looking for a specific design, and potential magtatakás to make them.

“This is how they would learn the tricks of the trade,” Gian said.

Their family taká business continued, even as they moved to Gian’s grandparents’ house right on the main road of Paete. There, the takás would get the spotlight, being displayed in the gift shop of Gian’s grandmother.

He shared that their parents would even take discarded takás, repair them, give them a fresh coat of paint, and display them.

At the time, Paete had many visitors who turned into buyers after seeing the colorful taká figures on display.

“May mga dumadaan. Maganda ang market (People would pass by. The market was great),” Ka Ichu said. Eventually, the buyers ended up developing the items themselves whenever they asked for specific designs.

Even as taká become their main livelihood, Ka Jong and Ka Ichu never forced the craft on their children.

Gian admitted with a little regret that he and his siblings were not as involved in taká-making – though they would of course be surrounded by it growing up, and would tag along with their parents whenever they made taká deliveries.

“I spent much of my childhood being around magtatakas and surrounded by takás and molde. I remember having a small gawaan (workshop) right outside our house. I would stay awake until late night mingling with the magtatakas who were finishing takás for delivery or so the next day. They were rushing things and trying to beat the deadline. Paeteños have a word for it: ‘dispacho,’” Gian shared.

He remembered trying to make taká purely out of curiousity. His oldest sister made takás, not because of their parents but because of her magtataká friends. His other sister’s taká-making memories were also solely for play, and nothing serious.

“I asked my mother why we (at least my sisters, as this was commonly a female activity) didn’t get to experience the same. She says, ‘Nag-aaral kayo, alangan namang pag-takain ko kayo (You’re in school, so why would I make you do taká)?’” Gian shared.

Perhaps the biggest impact taká has had on the life of Gian and his siblings was that they were all able to finish college. Taká was also able to help them pay for their father’s maintenance medicines.

“Outside Paete, the taká may be hailed as a work of art. But here, it is primarily a means of livelihood,” Gian said, adding that even the neighboring town of Pangil has benefited from the taká boom.

“Visit us and you would see that we are not really the most ‘successful’…. But I would say, the taká has been significantly instrumental in our having been sustained, without any of our parents having to leave for work abroad, a trend in Paete,” he said. The same goes for other families of magtatakas.

(Our kids got an education and got jobs. We still make taká, but life has at least gotten good.)

Ka Ichu recalled the taká boom of the ’90s, when they would have orders all year round. She said that orders began to decline around 2010, and even more now, due to the COVID-19 pandemic.

“While there were still a few orders in the beginning of the pandemic, it was toward the end of 2021, when wala na talagang order (there really wre no orders) for several months,” Gian shared. “Mama even tells about one of their buyers who supposedly claimed, ‘Pawala na ang papier-mâché (Papier mâché is disappearing).’”

Orders picked up again this year, though they’d be much fewer than before – from orders for hundreds of large takás, now they only get orders for five to ten pieces.

The Adao family’s newest project might be the next chapter in the taká’s story. Putting a taká in the hands of people who are eager to learn might just be the thing to keep the craft alive.

Initially, the family had reservations about essentially sharing trade secrets.

“Internal to the family, this question was raised not just once: ‘Hindi ba by putting everything in a box, parang pinamigay na ang family business? Or ang trade mismo ng Paete (Wouldn’t it be like we were giving away the family business, or even Paete’s trade)?'” Gian said.

They ultimately decided that the potential risk was insignificant compared to keeping a piece of Paete’s culture alive.

“Every initiative to preserve the taká is a contribution to securing the livelihood of the people who depend on it, and to keeping alive their stories,” Gian said.

He pointed out that the kit will preserve the knowledge of taká-making, because anyone who has the box will learn how to make one.

“Using the words of my mother, ‘Makilala pa rin ng mga susunod na henerasyon (The next generation will know about it),'” he said.

“This will give people the opportunity to experience the taká-making process and get to relate with the magtatakas who make them. We hope they will realize that what they will experience in a day of making the taká through the kit will have actually been the day-to-day life of almost every magtataká for many decades of their lives,” he added.

Most of all, the DIY taká kit is also a tribute to their parents and how they provided for the family by making and selling papier-mâché art.

“This is basically their story in a box. And not only theirs, but also of the many magtatakas who have been with us through the decades, and whom we wish to also honor through the kit,” he said. “As long as there is a taká, there will always be a story of a magtatakâ attached to it.” – Rappler.com