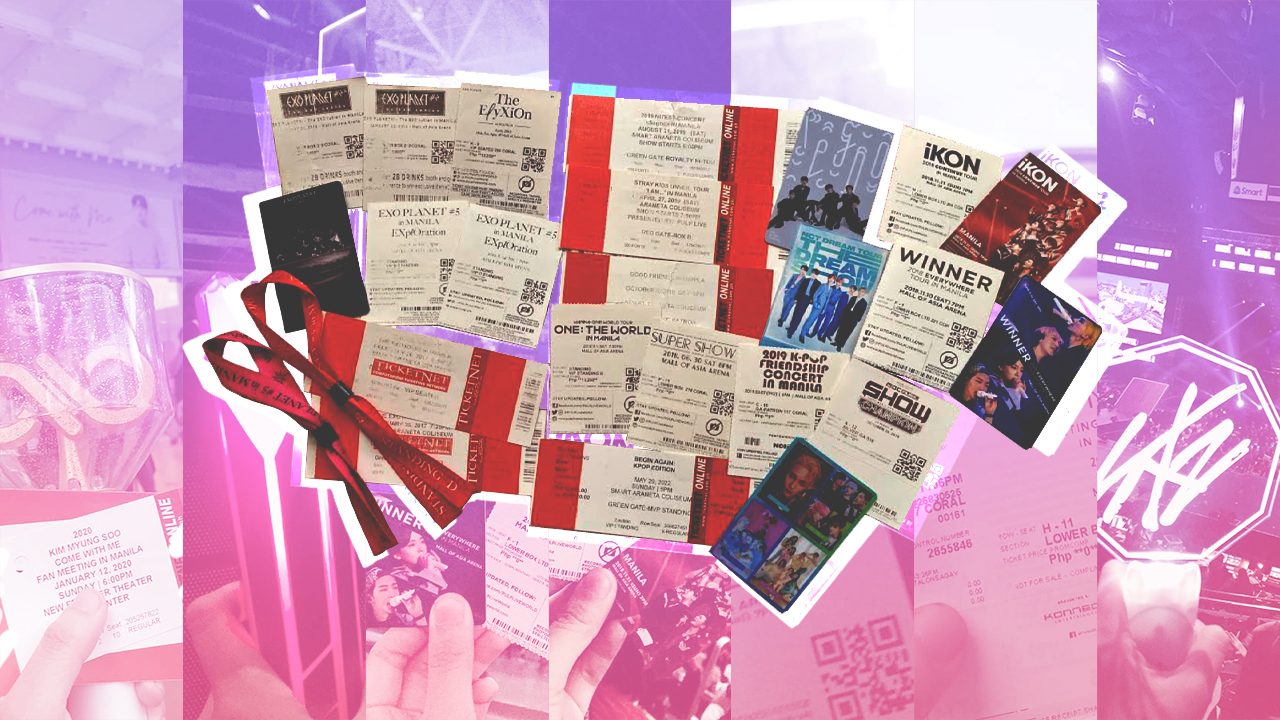 Photos courtesy of Maevs and Cha

Facebook Twitter Copy URL
Copied
From tried-and-tested tricks to securing tickets, to the dos-and-don'ts on D-day, here’s a guide on how to maximize your concert experience

The moment we’re all waiting, hoping, and praying for has finally arrived! While we’re thankful that virtual concerts gave us a reprieve during the height of the pandemic, we all agree that nothing still beats the experience of attending a live concert.

Now that many artists have already announced their plans of holding a concert in the Philippines, Filipino fans have also started their own preparations. After all, not everyone is lucky enough to see and listen to their favorite artists in the flesh! With all this excitement going on, it’s easy to get overwhelmed – especially if you still haven’t been to a live concert at all. And even if you’ve been to numerous shows before, there’s always this uncertainty of not being able to secure your desired tickets before they get sold out.

Fret not, because we’ve asked fellow fans for their concert know-how’s! From their tried-and-tested tricks to securing tickets, to the dos-and-don’ts on D-day, here’s a guide on how to maximize your concert experience:

First things first: save up!

You’ll never know when an artist will have their concert tour, so it’s best that you’re always financially prepared for it!

(Ever since I started liking going to concerts, I made sure to save weekly even though there are no announcements yet about the concerts I want to attend.)

The same goes for Maevs, a 23-year-old fan of several K-pop groups, adding that she even has a separate bank account for her concert savings.

For them, saving ahead is a big help, especially if concert announcements come as a clutch. Based on their experience, some concerts in the Philippines are announced just a month before the actual date, with the start of ticket sales just days after the announcement. Because of this, fans of these artists are not given enough time to prepare for it – and if you don’t have enough money for it, you just have to let it go.

Should you go for the VIP standing or the seated sections? Is it better to choose the send-off or the soundcheck perk? What if your favorite artists are all having concerts in the same month? Aside from the budget, there are also several other things to consider when going to a concert, so it’s vital to do your research beforehand.

Since she started attending concerts in 2016, Maevs said that she always opt for a seated section because she doubts she can handle standing for the whole duration of the concert. “I check kung alin ‘yung mas malapit sa stage, kung saan maganda pumwesto para kita lahat ng nasa stage, kung saan palaging nagsti-stay ‘yung bias ko,” she said. (I check what’s closest to the stage, which seat will give me the whole view of the stage, and which side my bias often stays.)

She added that she usually checks the fancams and performances of the group from other concert stops so she’d have an idea about their positioning in the actual concert, then decide which section she’d go for. Watching videos from other fans also gives them an idea of how the concert will look like in a certain section, and see if that view is already enough for them.

For Sam, the concert venue also affects her decision, saying that general admission sections in some arenas are better than others. Or in other cases, if a concert will happen at an open area, then that can also push fans to choose seats closer to the stage instead.

But the most important thing is that they choose their section based on their budget for the concert. “As much as I want na malapit sa stage (to be close to the stage), if my savings is not enough, then I opt for other tickets. Ang mahalaga naman ay nandoon ka (What matters most is that you’re there); the lower ticket tier doesn’t make you any less of a fan),” Maevs said.

Angel, a 26-year-old accountant, also weighs in on whether the ticket packages and their prices are worth it. “If it’s my favorite artist, I’m willing to spend more for the additional perks, such as soundchecks, exclusive photos, signed merchandise, or send-offs. I compare it with other concert stops and see if the additional expense is reasonable,” she said.

She added that pre-pandemic, she had been to two concerts outside the Philippines. “It sometimes surprises me how expensive concert tickets here in the Philippines could be. Like, a VIP ticket here in Manila is the same as a VIP ticket in Singapore plus round-trip fare. Usually, when there’s instances like that, I go for the concert abroad instead, because it also gives me the chance to have a vacation.”

“If you just do your thorough research, you’ll find the most reasonable option that fits your budget,” Angel said. “But it’s best to not always go all-out for one concert if you want to also attend other shows.”

For most of them who are fans of several artists, they make sure to always consider the possibility of their other favorite groups having a concert in the Philippines too.

“‘Yung sa magkakasunod na concert, kahit lahat gusto kong puntahan, pinipili ko talaga kung sino ‘yung mas gusto ko. Syempre, need mo ring i-consider ‘yung kakayahan ng wallet mo iIf there’s several concerts, even if I want to go to all of them, I just choose the ones I really want to attend. Because, of course, I have to consider my finances, too)” Carla, a 24-year-old law student, said.

For Charlene, a 24-year-old K-pop fan, however, her priority is to attend as many concerts as she can. How does she do it? Opting for the cheapest ticket. Sam agreed with this strategy: “I also don’t always go for the expensive sections to make sure that I have initial savings for other concerts – just in case there’s surprise announcements about them coming to Manila.”

All for the music: How GenAd seats give the best concert experiences During the start of the ticket selling, you should’ve already done your research and prepared your game plan. What time should you line up? Is it better to camp out? Which outlets accept cash or credit cards?

“Don’t hesitate to ask other fans about their experience in lining up for tickets and make sure that you follow the organizers’ accounts,” Angel said. For her, it’s more effective to line up at ticketing outlets rather than buying tickets online: “But my friends often buy their tickets online, so it differs from one fan to another. You just have to try and know what works for you.”

Be it via website or offline outlets, it’s best that you should already prepare all the necessary information beforehand. “I always prepare in advance, like I have top 3-4 choices for seats/sections that I want, just in case it gets sold out fast,” Maevs said. She also prepares her personal details so that it’d be faster to input them in the website.

If you’re not able to secure a ticket before it gets sold out, don’t lose hope yet and constantly check the website at random moments, because sometimes, additional tickets or unsold tickets will go back on sale.

In case you want to trade your ticket or buy a ticket from a reseller online, it’s best to remain vigilant. “Just don’t transact with a scalper, as much as possible,” Angel said. Scalpers are those who buy tickets and resell them at a much higher price.

“And if you’re planning to transact with someone from the internet, make sure you do a thorough background check on the seller – ask for proof of purchase, and other personal information. Be as makulit (nagging) as possible and inspect if they’re giving you the correct details. Don’t interact with someone that wasn’t vouched by someone you’ve trusted. Or if it’s a stranger, it’s best to trade or get your ticket in person. Concert tickets are not cheap,” she added.

Once you’re ~finally~ sure that you’re seeing your favorite artists live, don’t limit your excitement! Take care of your tickets (event organizers sometimes don’t allow entry for those who have damaged tickets), prepare fan events, make plans on how to go to the venue and back home, and memorize songs.

For D-day, here are some of their best concert practices:

Hopefully, this guide can be of help to you, and we’ll be seeing each other in a concert soon. If we missed any important tip you’d like to share, tweet us! – Rappler.com