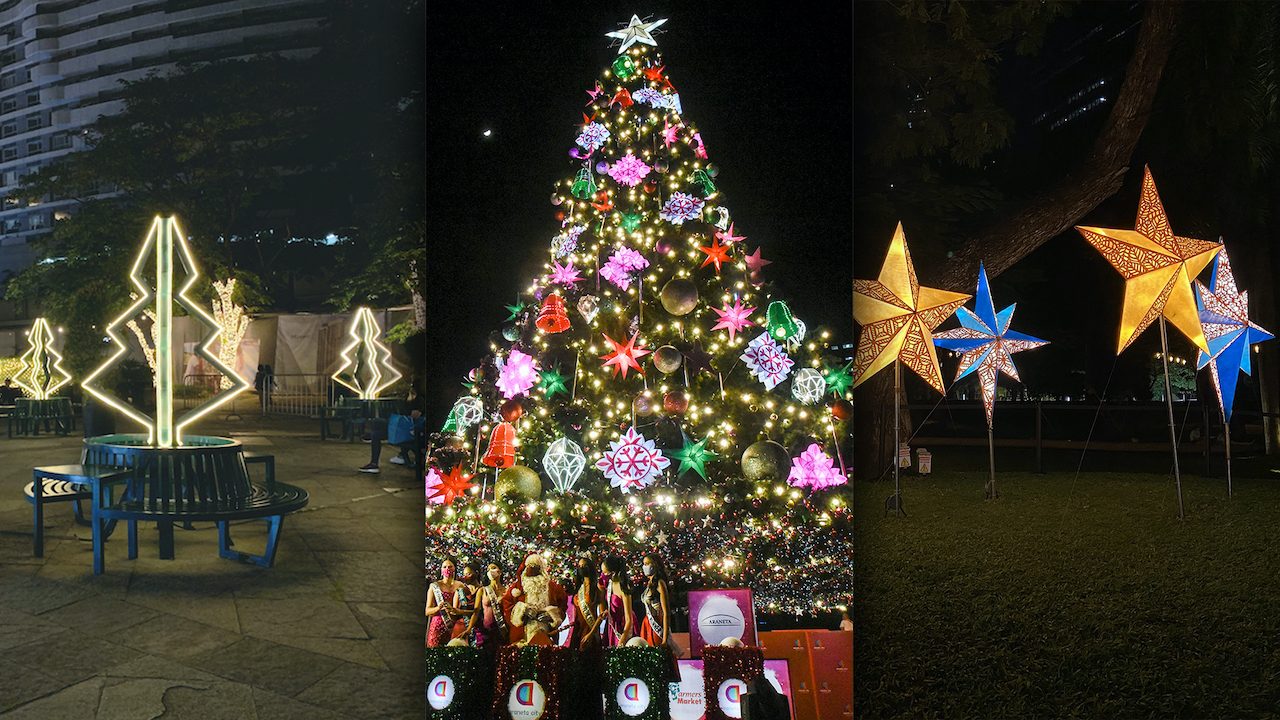 MANILA, Philippines – Christmas is right around the corner now, and if you’re not yet feeling the holiday spirit, maybe a thousand tiny twinkle lights is just what you need.

Even with the pandemic, Filipinos have been Christmassing hard since September, and by now most places have been dressed up in tinsel and lights for the holidays.

Whether you plan to take photos with your entire family or just amble by on your own, here’s where you can go in Metro Manila to take in the holiday cheer:

Nothing says “Christmas” more than a giant tree and a giant belen – both of which can be found at Araneta City in Cubao, Quezon City. The tree, located at Times Square Food Park, is 100 feet tall and decked out in lights, ornaments and tinsel. Meanwhile, the Belen on General MacArthur Avenue features a life-sized tableau of the nativity scene, with Filipino touches like capiz lights, parols, and a kubo roof.

Lights at the Park in Capitol Commons

The park at Capitol Commons in Ortigas, Pasig City is all lit up for the holidays, with trees shining bright for people strolling or jogging through, and Christmas tree installations that double as benches for park goers.

Also in Pasig City is the Bamboo Forest display, which puts a uniquely Filipino twist on the traditional Christmas tree. The installation features an assembly of bamboo-shaped sculptures all glowing gold, and are apparently meant to represent strength in uncertain times. Check it out Silver City 1A in Ortigas East.

Here’s a Christmas display you can watch from the safety of your own vehicles. Three McDonald’s branches – McKinley West in Taguig, Alabang West in Las Piñas, and Savano Park in Bulacan – have set up lights shows at their drive-thru lanes. Each location has a different theme: Icy Wonderland , Parol Holiday, and Happy Land. The shows will run from 6 pm to 12 midnight, until January 2.

Stars are glowing all over Bonifacio Global City in Taguig thanks to their Christmas displays – perfect for sightseeing after a dinner get-together, or on a bike or scooter.

Their famous lights show might still be virtual this year, but the Makati park’s giant parols, as well as the lights displays along Ayala Avenue, are still very Instagrammable.

Dapitan Arcade in Quezon City is famous for selling Christmas decor at bargain prices, and the shop displays turn the place into a Christmas wonderland. With rows of colorful parols, a rainbow of Christmas trees, and layers of kitschy ornaments, you’ll definitely feel festive – and bring some of that cheer home too. – Rappler.com