From the North Pole to the Philippines, this man brings Santa to life in the tropics 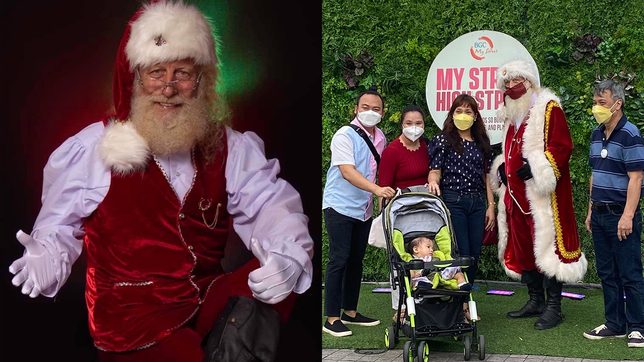 ALL AGES. Even adults don't miss their chance to take a photo with Santa Max. Courtesy of Maxx Newton

MANILA, Philippines – Everyone in Christmas-loving Philippines knows who Santa Claus is: the jolly old man with a twinkle in his eye, who sails across the sky in his reindeer-pulled sleigh, going from chimney to chimney to deliver gifts and make Christmas wishes come true.

But in this tropical country where chimneys and reindeers don’t exist, people don’t really expect Santa to turn up in the flesh. No Santas at malls noting down kids’ wishes, no Santas on the streets ringing bells for charity – with the exception of a group of men called Gentlemen in Red, an army of living Santas for hire in the Philippines and other parts of Asia.

One of them, Max Newton, has been bringing the character to life in the Philippines since the mid-1990s. In this Q&A, he tells Rappler about his life as a living Santa:

When and where did you start dressing up as Santa, and what led you to do it?

I was approached by a talent agent while waiting in a bank in Makati, about getting my daughter into a commercial. She asked me if I would like to do small walk-on parts for TV and movies. By Christmas that year, she asked if I could do Santa Claus in a mall. Not being too familiar with the concept, I agreed to do it. That was when SM Las Piñas or could have been SM Southmall was just finished in the mid-1990s.

From that first encounter with all the little faces lighting up and being greeted by adults acting like kids and seeing the happiness it created, I was sold and happy to do it ever since, enjoying every minute being “Santa Claus.”

What do you do for the rest of the year? Who is the man underneath the Santa suit? May we know how old you are and where you’re originally from?

But I myself was born in the port of Antwerp, Belgium, 69 years ago. After studying, I was a designer and artist up till now. At one time during the late 1970s and early 1980s, I worked at Hallmark, the greeting cards company on Christmas cards. To date, I paint oil on canvas when the time is available.

Charity work should be our main focus but has been neglected in the last 24 months due to the virus and the fact that most Santas are above 60 years old. We need to get stuck in and make that our main task for the virus-free post-COVID times ahead.

So let’s not ask Santa, “Where is my present?”

Let’s ask Santa: “What can I do for Santa in his quest to bring joy to the less fortunate kids all year round?”

Being in the tropics, doesn’t it get awfully warm in the suit when you go out?

It certainly does, but a very small price to pay for the happiness it brings so many young and old kids. Admittedly, since the early days, I have made adjustments on how to wear originally the costume and now the Santa suit.

Let me explain that last statement. A Santa costume is when one dresses up with oversized clothes trying to create an image of Santa, this is sometimes referred to as the Coca-Cola Santa and its Americans commercializing the Christmas Season after the depression years of the early 1900s. You would use fake hair/wigs and fake beards, even a fake belly.

For the last few years I have been a real bearded Santa Claus and wearing a Santa suit, made out of top quality materials that are more natural materials and therefore more breathable, keeping me not necessarily cooler but more comfortable. I have lived in the Philippines for over 30 years, so I have made some slight adjustments during that time to cope with the temperatures here.

My Santa suit depicts an image going back hundreds of years – not necessarily the first Santa, but an adaptation of how the Santa could have looked his best in those days, often referred to as a Victorian Santa image. These days the most popular color is red, but during the 1800s anything from purple, brown, green to golden yellow was used. Some Santas with an orthodox background use blue and white robes, and they do look ready for the coldest of climates, ready for the snow and frost.

It’s rare to have Santas in the Philippines actually be Caucasian. Have there been any memorable reactions you’ve gotten for presenting as an “authentic” Santa?

“You are a real Santa” is my favorite. That leads to many telling me that I am their favorite Santa – very heartwarming and more reason to keep doing it. Sometimes and probably most memorable is when they touch me and want to pinch my hand to make sure I am real, they keep looking into my eyes (btw they are blue) till they are convinced it’s human and not a dressed-up doll.

I am often asked where I come from too, and of course I can only answer that by saying “the North Pole.” During my fake beard days, I had the odd times my beard being pulled. These days the kids are so careful to touch my beard and find it so soft. It does give a closer bond for the kid, knowing I am real not a kind of mascot.

As to being rare to have Caucasian Santas here, we are a group of real bearded Santas called Gentlemen in Red and the company Living Santas started in 2019 with somewhere from 10 to 15 Santas. Even the fake bearded Santas around have several Caucasians amongst them, but the synthetic white beard disguise makes it difficult to tell or see their face properly. It was one of my peeves during those years I was doing it that way.

Has the pandemic affected your Santa activities in any way? If so, how?

Yes, it has been badly affected. 2020 appearances were non-existing and just now we are recovering events for 2021, but not at 2019 levels at all yet. Some of the Living Santas do Christmas cruises in Asia, but the last ones were in 2019, so let’s hope they are back for the 2022 season. We were also securing more South Eastern country visits too, but they were cancelled for 2020.

Our local Manila events in 2021 are down to less than 25% of the 2019 levels. Our charity events were hampered from the time Taal flared up in January 2020. Only two of our most local Santas to Taal had a chance to give a helping hand.

And this year my Santa friend of long standing has been fairly active with a well-known charity. A few localized donations have been possible but nothing to write home about.

So let’s hope we can put the virus behind us from January 2022 and get set up for the great revival of the Philippine Christmas traditions and spirit with more fun, joy, care, color, the arts of giving, grace, events, appearances, cruises and more Christmas magic.

What’s the strangest gift request you’ve gotten from a kid?

Not so much the strangest but certainly the most memorable gift:  “Can you ask my mom to come back? We miss her.”

She had passed away a few months earlier. I told him that it was God that was with her and that they will always be with him, and when he was “nice,” they were very proud of him. He smiled and left me with a tear!

Strange gifts usually come from the more matured kids. Like they ask for a boyfriend, airplane, house and lot, snake pets. But, hey, what’s wrong with having your imagination go wild a bit at Christmas time? After all, we do tell the kids to dream big and set high goals, so you can’t blame them for taking their parents’ advice.

What message do you have for Filipinos celebrating Christmas in 2021?

Smile and enjoy, be happy and don’t worry. But let’s remember we are celebrating the birth of Jesus, that’s why we call it Christ-mas! As I mentioned before, it’s not all about presents and gifts from Santa! Let’s ask Santa what we can do to make his wish come true in 2022.

To know more about Santa Maxx, check out his Facebook page. – Rappler.com