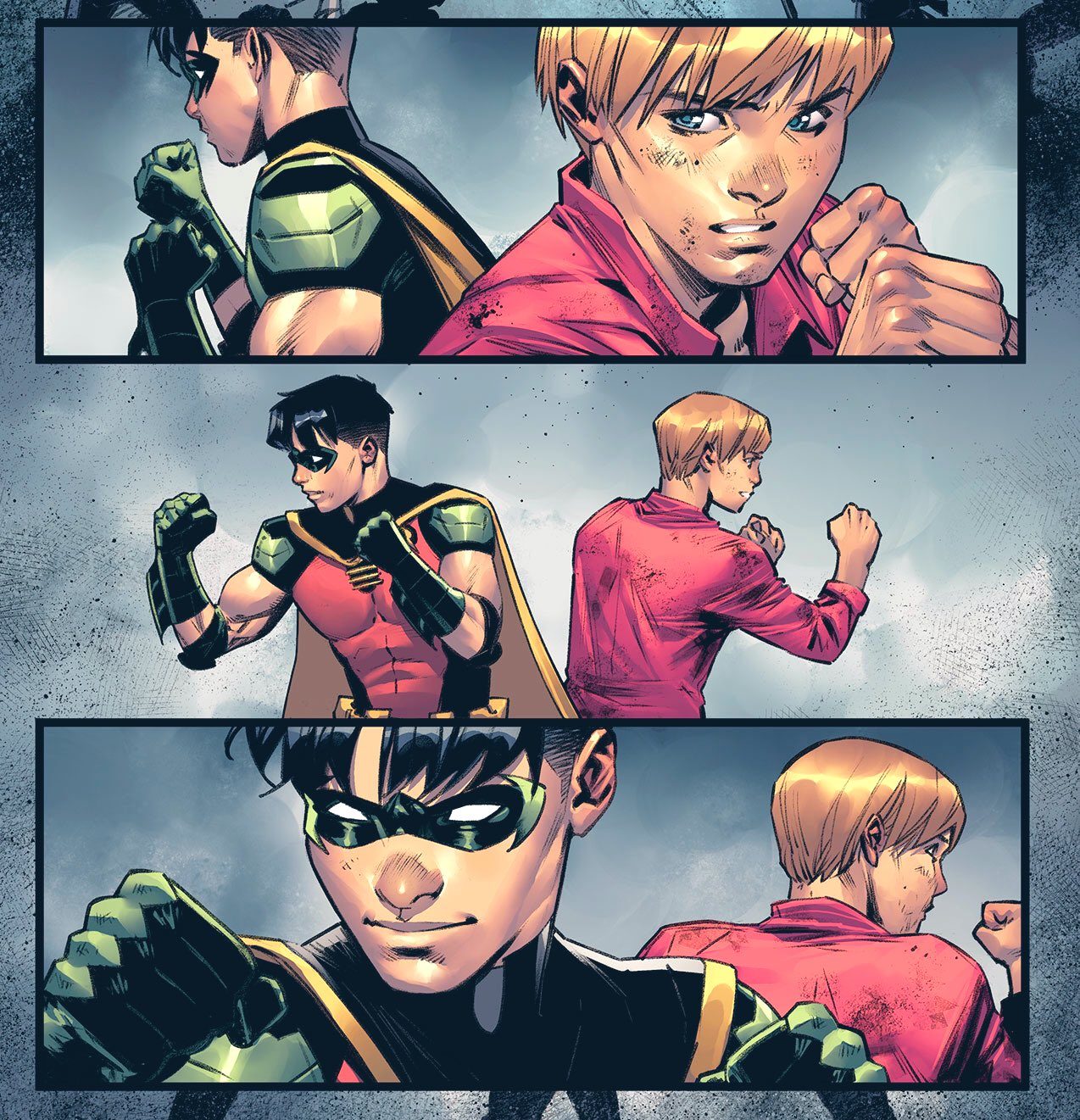 Facebook Twitter Copy URL
Copied
'Tim is still figuring himself out. I don’t think he has the language for it all... yet,' says writer Meghan Fitzmartin

Sum of our Parts, the sixth issue of the monthly anthology series, shows Tim Drake, also known as Robin, not knowing what he wanted “until right now.” In the comic, Tim visits old friend Bernard Dowd’s home for dinner, which was cut short due to a villain Tim had to fight undercover as Robin. He saves a kidnapped Bernard in the process.

“Ever had a lightbulb moment? Like something out in the there has been taunting you, teasing you. People keep asking me what I want. Oracle. Dick. Steph. Even Conner. But I couldn’t grasp it, whatever it was, it always just felt out of reach. Until now,” Tim, as Robin, thinks to himself during a fight scene.

The next page shows Tim knocking again on Bernard’s door, telling himself “he’s got this.” Bernard says he’s glad to see Tim again.

“I’m really glad you got home okay. I’ve been doing a lot of thinking, about that night, and I don’t know what it meant to me. Not yet. But I’d like to figure it out,” Tim tells Bernard.

“I was hoping you would. Tim Drake, do you want to go on a date with me?” Bernard asks Tim, to which Tim replied: “Yeah, yeah… I think I want that.”

Tim Drake was first introduced in the comics in 1989 and is the third character to assume the role of Robin. This is the first time the comic has addressed Robin’s sexuality since its debut in 1940.

“I love this character very much, and as I went back to reread as much as I could to do Robin justice, it became clear this is the story Tim needed to tell,” Meghan told Polygon in an August 10 interview.

“I wanted to pay tribute to the fact that sexuality is a journey. To be clear, his feelings for Stephanie have been/are 100% real, as are his feelings for Bernard. However, Tim is still figuring himself out. I don’t think he has the language for it all… yet,” Meghan said.

“My goal in writing has been and will always be to show just how much God loves you. You are so incredibly loved and important and seen. Forever grateful to be trusted with Tim Drake and his story and honored to work with the amazingly talented @BelenOrtega_ and @loquesunalex,” she wrote in a tweet.

Artist Belén thanked everyone for their support on her very first series with DC Comics. “It’s overwhelming all the comments and love I’m receiving from you guys. See you soon Tim!” she wrote.

The next chapter in Tim Drake’s story will be revealed in Batman: Urban Legend’s seventh issue in December. – Rappler.com