Peculiar puppers: Strange dog breeds and the stories behind them 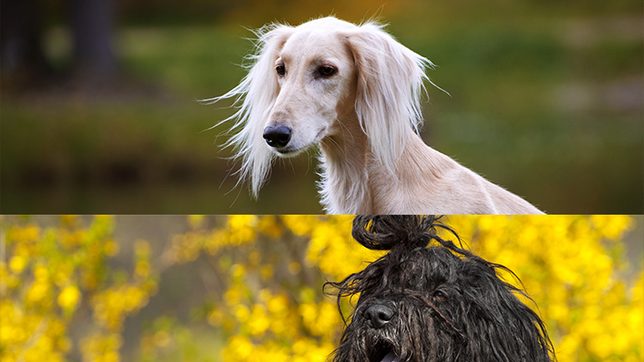 ODDITIES. Bergamasco Sheepdogs, Salukis, and Xoloitzcuintlis are among the weirdest dog breeds in the world.

When you think of dogs, you’re probably think of that Insta-famous corgi, Lady Gaga’s French bulldogs, your best friend’s shih tzu, the friendly neighborhood aspin, or the internet’s doge, the shiba inu.

You probably aren’t thinking of a creature with six toes, a wild thing that climbs trees, or a dirty mop on four legs – but such animals exist, and yes, they’re the same species as your run-of-the-mill poodle.

Thousands of years of dog breeding has led to some truly peculiar pups and kooky canines. Here are just some of the world’s strangest dog breeds:

Among the strangest dogs is one of our own: the aso ng gubat, also known as the witchdog or the tiger dog. These are dogs that would make their wolf ancestors proud. As skilled hunters, they have sharper claws than most dogs, allowing them to scale walls and climb trees as they pursue their prey.

They also supposedly only mate with their own kind, which means theirs is a purebred line.

The aso ng gubat could be the Philippines’ first officially-recognized dog breed – in 2015, dog researcher Tom Asmus, who cared for 10 witchdogs in Bukidnon, submitted samples of their DNA to the World Canine Genome Project, though according to Esquire, their samples have yet to be analyzed by a canine geneticist to determine if they are a unique breed.

This dog may look like the victim of an overly enthusiastic dog groomer, but it’s born hairless (though a less-common coated variety also exists), due to a genetic mutation that also causes a lack of premolars.

Named after the Aztec god Xolotl, Xoloitzcuintlis have been around for over 3,000 years. To the Aztecs, these dogs were guardians of the living, and underworld guides for the dead.

According to National Geographic, accounts from European explorers noted how Aztecs would tuck Xolitzcuintlis into bed at night with blankets, though oddly enough, they were also eaten as food (almost to extinction by the conquistadors, even).

In modern times, they’re an official cultural symbol for Mexico City, and appear in works like Diego Rivera paintings, and Pixar’s Coco. They’re also increasingly popular as pets – though they do need to wear sunscreen when they go outdoors.

Despite looking every inch the canine, this breed is described by the American Kennel Club as “cat-like” – mostly because they’re independent and even groom themselves as cats do.

Originally bred to hunt reed rats in Africa, basenjis were so valued that they were even gifted to Egyptian kings. As modern-day pets, they are curious, loyal, and are great as family dogs – though their independence makes them difficult to train.

Basenjis do not produce a barking sound, but they do howl, yawn, and yodel. One theory is because basenjis originated in the African wilderness, where barking could alert predators like leopards to their location. Yodeling, on the other hand, is less accurate in terms of revealing their location.

With their spotted skin, weird hair patterns, and general air of having narrowly escaped death, the Chinese crested is a staple at the World’s Ugliest Dog contest, winning nine times, from 2002 to 2019.

According to the American Kennel Club, they were among the dog breeds that were “miniaturized” by the Chinese, originating from larger hairless dogs from Africa.

The breed was favored by sailors for their rat-catching skills onboard Chinese trading vessels. As they sailed across the seas, Chinese cresteds then spread around the world.

Despite earning a reputation for being the World’s Ugliest Dogs, the breed has appeared in several films and shows including 102 Dalmatians, New York Minute, and Ugly Betty.

These fox-like dogs might look normal – until you count their toes. Originally bred to hunt puffins in the cliffs and snow-covered mountains of Norway, they have (at least!) six toes and extra paw pads on each paw.

As if they weren’t strange enough, they also have a neck that can bend back fully to almost touch their spine, forelegs that turn to the side at 90 degrees, and ears that fold forward to prevent snow from entering.

Since puffin hunting has been banned in Norway, these special dogs are now facing “job loss” according to the Institute of Canine Biology – but perhaps with renewed interest and with their “energetic, alert, and loyal” temperament, they can find new employment as the family guard dog.

The original otterhounds were the best friends of fishermen in medieval England, who bred them to hunt the river otters who often stole the day’s catch.

Nowadays, otterhounds are extremely rare – according to the American Kennel Club, there are only about 1,000 left in the world.

These shaggy dogs have a double-layer coat (the undercoat is water resistant) and webbed feet, and are scenthounds – “a nose on four legs,” as described by one owner. Water dogs through and through, they also apparently do not simply lap at their water bowl like regular dogs, but will instead submerge their heads when they drink!

They also, apparently, love to sing.

Leggy and elegant, salukis might look like the canine equivalent of supermodels, but they are actually athletes, and can run up to 35 miles per hour.

Bred by Bedouins for their agility and sharp eyesight, salukis were used in the Middle East for hunting gazelle. And while dogs were seen as unclean in their culture, salukis held the distinction for being “the noble one” – the only canines allowed to share tents with their masters.

Some salukis are still used for hunting today, but they are now trained for racing – in the United Arab Emirates, saluki races are held much like horse races.

Despite its striking resemblance to a dirty mop, this dog is actually an expert shepherd originating from the rocky Italian alps, where their scraggly coats protected them from the biting cold.

Surprisingly, their special coat is apparently easy to clean. As the Bergamasco Sheepdog Club of America describes it, “Even after rolling in leaves and pine needles, a mature bergamasco can simply give a good shake and there is nothing left stuck in its coat.”

Unbelievably, they also say that bathing is only required one to three times a year – though it makes sense, because their coats must take forever to dry.

Underneath that coat, bergamascos are hardy, healthy dogs, and are described by the American Kennel Club as “loyal, loving, and trainable, with a dash of mountain-dog independence.” – Rappler.com