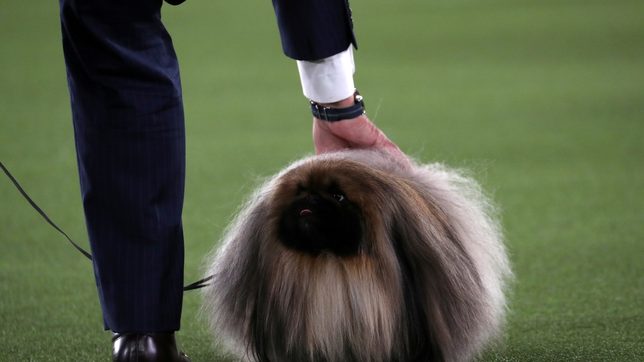 BEST BOY. Wasabi, a Pekingese of East Berlin, Pennsylvania is presented by his owner and handler David Fitzpatrick before winning the Best in Show at the 145th Westminster Kennel Club Dog Show at Lyndhurst Mansion in Tarrytown, New York.

Wasabi, a fuzzy Pekingese with a black and brown face and soulful eyes, won Best in Show at the Westminster Kennel Club Dog Show on Sunday, June 13, in Tarrytown, New York.

A Whippet named Bourbon came in second, winning the Reserve prize at the 145-year-old competition. This year marked the first time the show was not held in Manhattan.

Due to the COVID-19 pandemic, organizers moved the show from its usual Madison Square Garden digs to the 19th-century Lyndhurst Mansion by the Hudson River in Tarrytown, and delayed it from February so it could be held outside.

Mathew, a French bulldog, and Connor, an Old English Sheepdog, were also in the finals on Sunday, along with a West Highland White Terrier named Boy, a German Shorthaired pointer called Jade and a Samoyed named Striker.

Held annually since 1877, the show is one of the oldest and most popular sporting events in the United States. Dogs from more than 200 different purebred breeds can compete, with judges determining which contenders best conform to their breed’s standards.

Wasabi and Bourbon beat out thousands of other dogs to win Best in Show at the American Kennel Club National Championship in 2019 and 2020 respectively. – Rappler.com