MANILA, Philippines - Criticisms against a recent ad of the Belo Group for its men's line are piling up, with comments highlighting faux pas already committed by other beauty brands in recent past.

On Sunday, July 1, comments on the beauty business's Facebook wall had some calling the campaign for the whitening products as "insensitive," "stupid," and "insulting." On Twitter, it was described as "social-climber-ish" and "biased against fair skin."

The ads feature a man -- who now has whiter skin -- as more successful and socially accepted. See the screengrabs of the ads and the comments below: 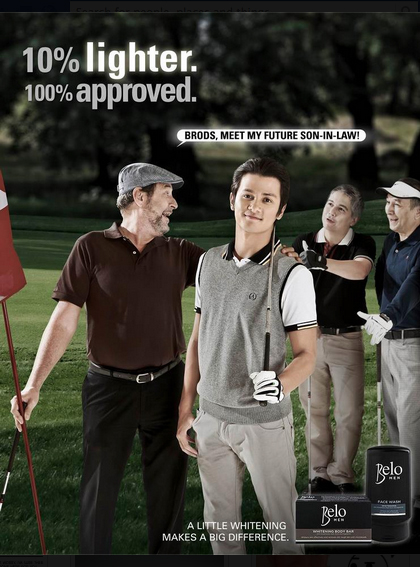 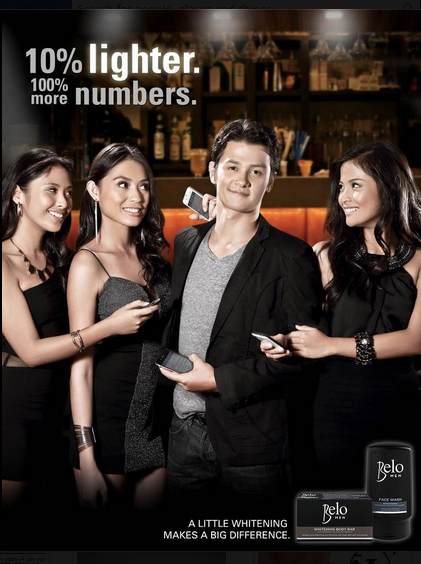 One netizen who thought the viral publicity tactic may work, despite the "insulting" message, suggested not to share the image to other social media users.

Social media went abuzz hours before the Belo Men Twitter party scheduled on the same day. Tickets to the FHM 100 Sexiest party will be given out during the event.

Here's how some netizens reacted:

[ View the story "Netizens react: is the Belo Men ad offensive?" on Storify ] Netizens react: is the Belo Men ad offensive? Storified by Rappler · Sun, Jul 01 2012 04:53:09 Barely a month after local clothing chain Bayo was on the receiving end of disdain on social media for a campaign, the Belo Group is now experiencing the same social media backlash for a series of ads launched through their Facebook page. Belo ad gets heat in social mediaMANILA, Philippines - Ever since Bayo's "What's Your Mix?" campaign that the public generally considered an "epic fail" (an Internet slan... The ads have since been deleted from their Facebook page, but it has already gone viral on Twitter. What did people have to say? Rappler compiled some reactions: Did you guys see the recent ad by Belo? Racist! Porke't maitim di sosyal? Puti lang pde maging sosyal?THEAIDXPAREDES Lol yung belo men ad. Dapat lang batikusin. Porke maputi di ibig sabihin na maganda na. Bat ba ang daming gusto magpaputi.Angel 앤젤 @patevangelista @rapplerdotcom All these protests just show how much people underestimate our intelligence.Rain Tan Nakikiride sa viral ad by spewing negativity, class stratification through white-man superiority/ supremacy (aka... http://fb.me/I8BlbLyhMarin Some netizens pointed out how "similar" the Belo Men ads were to the Bayo campaign, which the company eventually had to pull out. Why can't other brands learn! "@patevangelista: From Bayo to Belo. RT@rapplerdotcom: Belo ad gets heat in social media http://bit.ly/LISbcb"Jackie Gorospe is the ad agency who did Vicky Belo's billboard the same as the one whodid the Bayo ad?WAWAM Not sure if the belo men ad is even real. The poster itself despite the discrimination issue is very tasteless. Chaka ng pagka-gawa. #BeloAdCarlo Tabije First, there was Bela Padilla's FHM cover. Next, Bayo's recent ad campaign. Now, even Belo Men is joining in. Is racism so in now? #GoFigureCanon Dayrit Some felt as though the Belo Men campaign wouldn't be the last of its kind. [ Read from Rappler: The tyranny of tisay beauty ] Mga Pinoy kasi dino-diyos mga artista. Sila ang standard ng ganda. RT @rapplerdotcom: Belo ad gets heat in social media http://bit.ly/LISbcbBobby Lee As long as our Euro-centric notion of beauty remains, Bayo and Belo will certainly not the last "racist" ad campaign.Niki

Filipinos have been more vigilant against advertisements that suggest, imply or even hint of a message that lighter skin is better.

This, however, didn't stop Executive Optical to feature on its billboard along Edsa this image: 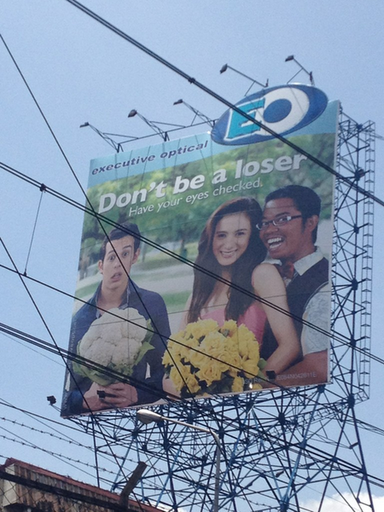 ALTHOUGH IT GENERATED NEGATIVE reactions, unlike Bayo's billboards, this billboard is still up along Edsa.

Just like its predecessors, EO's wit-turned-ugly "message" also angered netizens and got in the news.

People wonder: why do some billboards continue to be racist?

We want to know your opinion. What do you think of this ad? Share your comments with us below. - Rappler.com