Da Vinci in Manila: Exploring the works of a genius

MANILA, Philippines (UPDATED) – For centuries, people around the world have been fascinated and awed by the works of Leonardo da Vinci. Considered the greatest genius of all time by scholars and experts across the globe, da Vinci left a huge legacy across numerous disciplines.

He made his mark on art, engineering, science, music, architecture, and warfare, to name a few – and his works have been seen by millions of people in museums in Europe.

Now, Filipinos get to take a closer look at Da Vinci's greatness as The Mind Museum showcases Da Vinci: The Genius, a traveling exhibit that opened last September 1, and will run until November 30.

The touring exhibit is the only one in the world that offers a comprehensive analysis and interaction with the Renaissance legend's works, the organizers said. 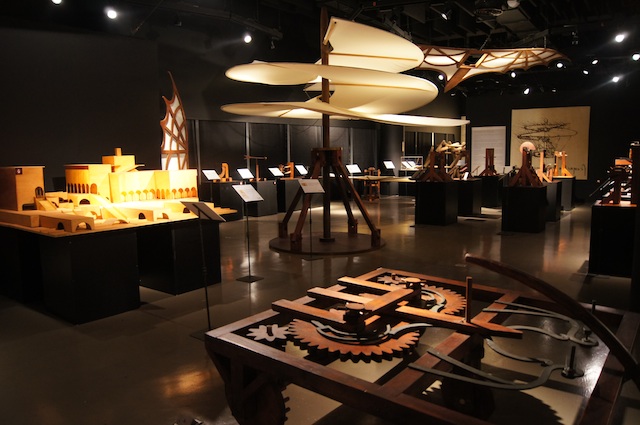 TRAVELING EXHIBIT. A view of one of the exhibit areas of Da Vinci: The Genius at The Mind Museum.

Photo courtesy of The Mind Museum

The Da Vinci traveling exhibition was created by Australia-based Grande Exhibitions, with the assistance of experts from Italy and France, and under the auspices of the Commune di Roma, Commune di Fireneze and Citta Di Venezia.

"Da Vinci is top of mind with everybody right now, from the Da Vinci Code to Da Vinci's Demons – both of those have been worldwide successes," Jason Brown, Exhibition Production Manager of Grande Exhibitions, said.

"I think most people associate Da Vinci with his artwork, but it's so much more than that. He was involved in anatomical studies, civil engineering, physics, hydraulic and aquatic study, musical and optical [works], he's involved in designing things for the theater during his time, and he also designed several military apparatuses for the militaries of his time," Brown said.

But why choose a Da Vinci exhibit, among dozens of traveling exhibits? Maribel Garcia, curator of The Mind Museum, said it's the perfect fit for the museum.

"I think Da Vinci, in one stretch of a mind, you have the arts and the sciences working together in one mind. He was a natural, a natural Mind Museum exhibition," Garcia said.

From art to physics 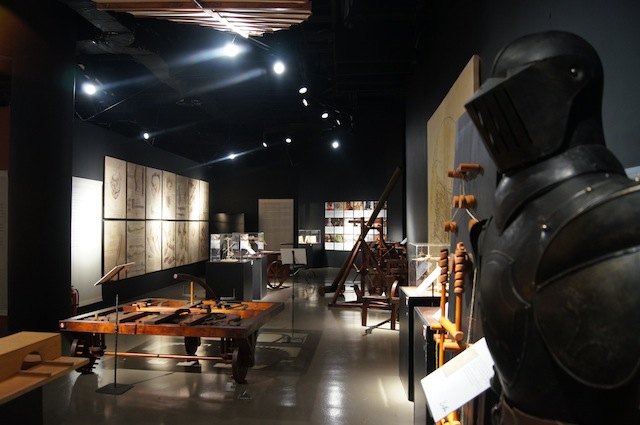 In the exhibit, visitors will see over 200 of his works, from drawings and sketches, to full-size machines, to replicas of his larger inventions such as war machines and flying machines.

Because his actual works are too valuable and too fragile to be toured around the world, the company instead had replicas of the devices and inventions made - and no plastics, please.

"This exhibit has been faithfully recreated from Da Vinci's codices, using materials that were specific to his time. So you won't see any plastics, you won't see any material at all that wasn't available to Da Vinci," Brown said. 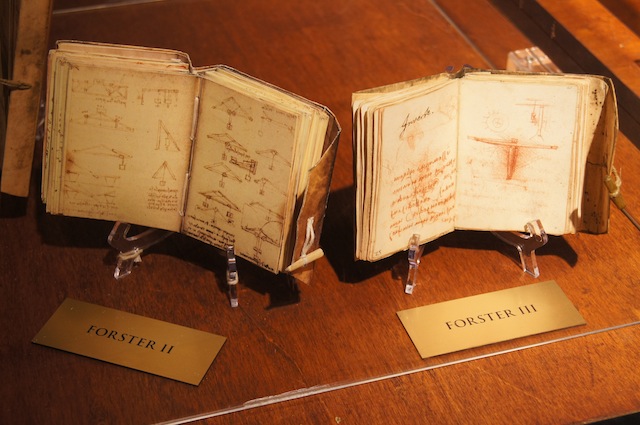 CODICES. These reproductions of Da Vinci's original codices were made to look like the original.

"What the visitor will see here will be almost exactly what Da Vinci's inventions would have been created in the 1400s to 1500s," he added.

Some of the exhibits highlights include:

The exhibit is also a hands-on one: people can see for themselves how the machines work, and touch-screens give an interactive tour of his writings and other works.

The exhibit also showcases The Secrets of Mona Lisa, and a special BBC documentary on Da Vinci's life, The Man Who Wanted To Know Everything. 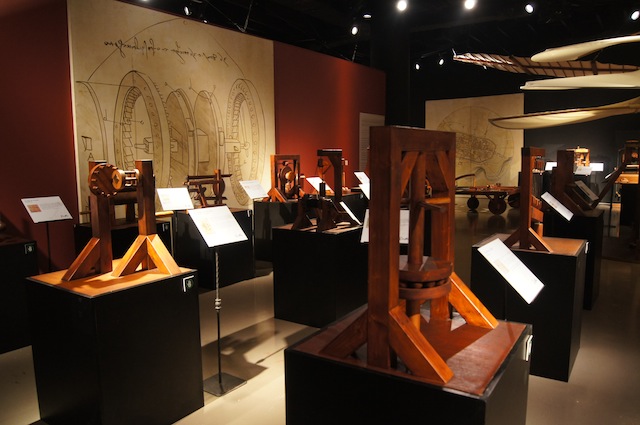 PHYSICS. The Physics area of the Da Vinci: The Genius exhibit.

"We have provided every machine invention and artwork, etc., to the Mind Museum, and have been able to fit it in the gallery, so visitors will have exposure to the entire Da Vinci: The Genius exhibition," Brown said.

"When we unloaded about 83 crates and opened the lids, we were all gasping at the incredible reach of the mind of this genius into the future where we all live now," Garcia said. "All of us in our team marveled at how fortunate we are that we would be the home of the works of this genius for 3 full months."

The museum also lined up other activities related to the exhibit.

"There [were] accompanying activities... so that you will know not just Da Vinci the genius, but also the environment to which he was born – and which he helped create – which is the Renaissance," said Garcia.

A year in the making 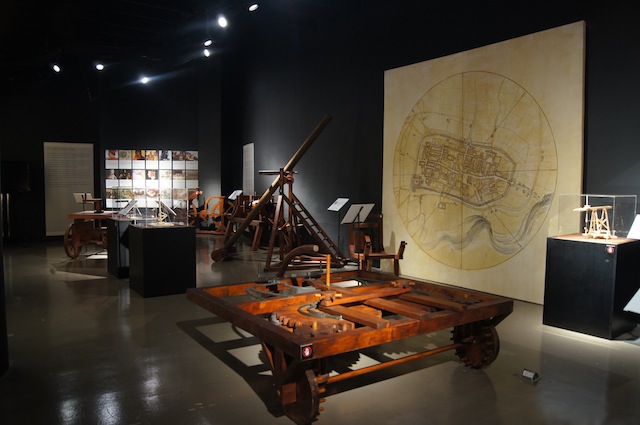 CIVIL WORKS. The Civil area of the Da Vinci: The Genius exhibit, showcasing the Renaissance master's work in urban planning and design.

The stop in the Mind Museum is a culmination of nearly a year of preparation, from planning stages to opening day.

"We started preparing… October last year," Brown said. "There is a considerable amount of preparation that takes place not only from the logistical point of view – the actual moving of the exhibit around the world – but in preparing the new venue, marketing [among others]."

Grande has been operating the Da Vinci exhibit for 7 years now, and it has been to over 50 cities in 5 continents. But each stop, each exhibit, is different.

"I think every venue has its own uniqueness about it, absolutely, and every venue is a new experience for us: different visitor base, different people to interact with," Brown said.

The Mind Museum said the Da Vinci: The Genius exhibit is part of its aim to bring the world's top exhibits closer to Filipinos.

"Since we opened last year, in March 2012, we made a promise to the Filipino public… to give them first-rate, traveling exhibitions available in the world.  And what better way than to have the genius of all time, grace the Mind Museum, and in effect, the country?" 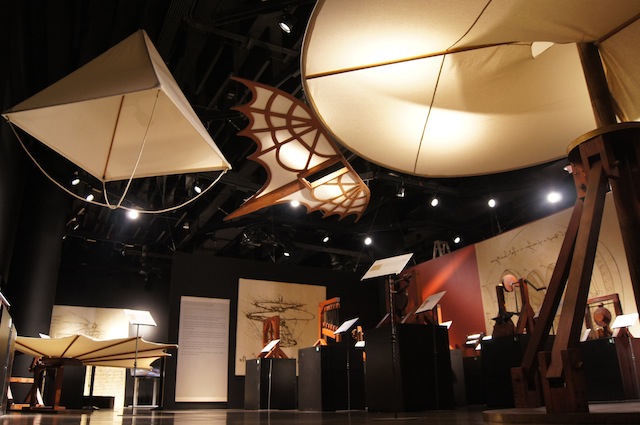 FLIGHT. These are some of the flying machines Da Vinci designed.

In this particular exhibit, the people behind the museum would like Filipinos to be inspired by the works of the world's greatest genius.

Said Garcia: "We want our guests to find Leonardo alive in the spirit of curiosity, exploration and expression which would be ignited by this exhibition experience. Leonardo’s genius also now lies in sparking the creative in each of us." - Rappler.com

The Da Vinci: The Genius exhibit runs from September 1 to November 30, 2013, at The Mind Museum in Bonifacio Global City. Ticket prices for the exhibit, open Tuesdays to Sundays, range from P200-250. For more information, log on to www.themindmuseum.org.

This piece was first published September 8, 2013.