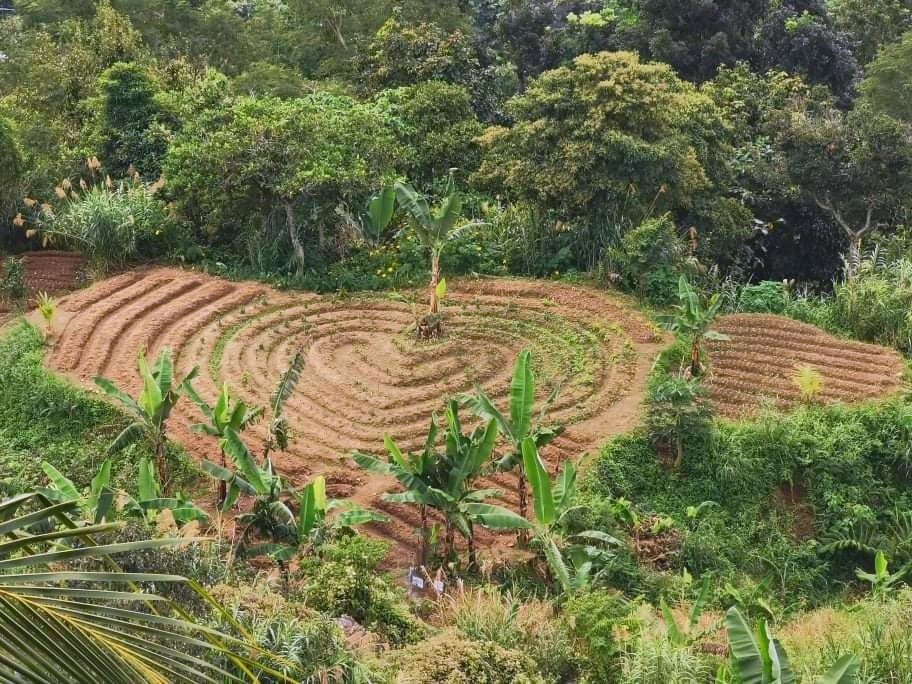 BAGUIO CITY, Philippines – A couple’s dream of providing farm-to-table and healthier food options helped two restaurant owners in Baguio City to rise above the pandemic. The 2.6-hectare land, which Health 100 restaurant chain owners Elmer and Dr. Celestrelle Macalingay bought just days before the Luzon-wide lockdown, saved them from the pandemic’s mental stress, and saved their workers as well.

They named the place “Um-a,” the native term for swidden farms.

“Days before the lockdown, we acquired the property, and we did not know that it would save our sanity during the hard lockdown,” Elmer shared in a December 17 interview with Rappler.

“The place proved to be the better investment. During the COVID-19 lockdown, it served as a safe place for us,” added Celestrelle.

Seven stores comprise their chain, offering healthier food options in their mostly plant-based menu. All stopped operations at the peak of the Luzon-wide lockdown. They decided to shut down one and sell another as the pandemic dragged on.

When COVID-19 hit Baguio City, cafes and restaurants were among the establishments hard hit by the lockdown.

“At least we had this (farm) because the lockdown hit us hard (emotionally); the financial side is a different story,” he said. Despite the disruption of their operation, Elmer and Celestrelle said they did not fire workers.

The couple offered them to work on the farm. Their employees were the ones who cleared the land covered by thick bushes. Twelve employees now cultivate the farm. Those not into agriculture volunteered in the community kitchen, which the couple set up for frontline workers, while others voluntarily resigned to look for another job.

According to Elmer, he saw the gap for healthy and vegetarian meals in restaurants when he went on a vegetarian diet. “It was very hard for me to find a place to eat,” he said.

“I think it was in 2004 when I told myself that I would start a vegetarian restaurant, so I was reminded of that vision in 2009 when the financial crisis hit the country,” he recalled.

He was doing good as an insurance salesman when the global financial crisis in 2008 happened, recalling the sudden landscape change in his work. “Selling insurance became hard, so I have to think of another way to earn,” he said.

In November 2009, they opened Health 100, serving vegetarian food, and that became a hit.

“The timing was good. During that time, people in the city became concerned about their food and health. Many were doing tai-chi and taebo in Burnham Park. There were also small and scheduled booths selling organically grown vegetables,” Elmer said.

They started to expand their business in 2012, mixing their menu but still offering vegetarian dishes. Besides providing healthy food, they also envisioned the restaurant as a “marketing arm” for farmers producing organic vegetables and other local food products, like heirloom rice.

According to the couple, their menu choices did not become difficult since their religion teaches simple and healthy living. “We also have food restrictions, so it was just like converting our usual diet on a commercial scale,” Elmer said.

A farmer’s son, Elmer, had always envisioned returning to farming. However, it would be different from the subsistence farming he grew up with this time.

“We looked back at our value chain and identified what products we can produce, which were vegetables mainly. It is also difficult to acquire leafy vegetables for salads during and after typhoons,” Elmer explained.

They thought of solving the problem by farming their vegetables “to ensure sustainable and traceability of our raw materials.”

“With this, we are assured of the source and how the products are grown and handled,” Elmer added.

Their venture to farming became an everyday learning opportunity for the couple, sharing their realization that “it is easier said than done.”

Currently, the farm has vegetables and fruits, around 400 free-range native chickens, and a fish pond. The farm also absorbs the waste from their restaurants, turning them into compost and chicken feed. They plan to expand the farm to include free-ranging sheep, goats, and ducks.

Celestrelle shared their long-term vision of sourcing raw materials from the farm and the nearby communities. They also plan to put up some lodging huts using old wooden rice granaries from the province.

“It would be a café, a restaurant, a place where you can pick the freshest vegetable and fruits and if they want, we can cook it for them,” she added.

They hope to open the restaurant once they complete the menu, which will be “100% local.” The camping ground will be open by January, and they hope to make the lodging huts available by mid-2022.

‘We want to keep our commitment with the community of helping the farmers market their products, so we will also partner with the local government for them to display their products,” the couple said.

The restaurant at Um-a Farm would be the sixth in the chain. Currently, the five operating restaurants include Health 101 at the Gladiola Hall of the Benguet State University in nearby La Trinidad town; Health 102 along General Luna; Health 101 at the Department of Health compound; and Ecolodge and Health 100 at Magsaysay Ave, all in Baguio City. – Rappler.com

Your tendency to overindulge these holidays could relate to your ‘eating personality.’ Which type are you?