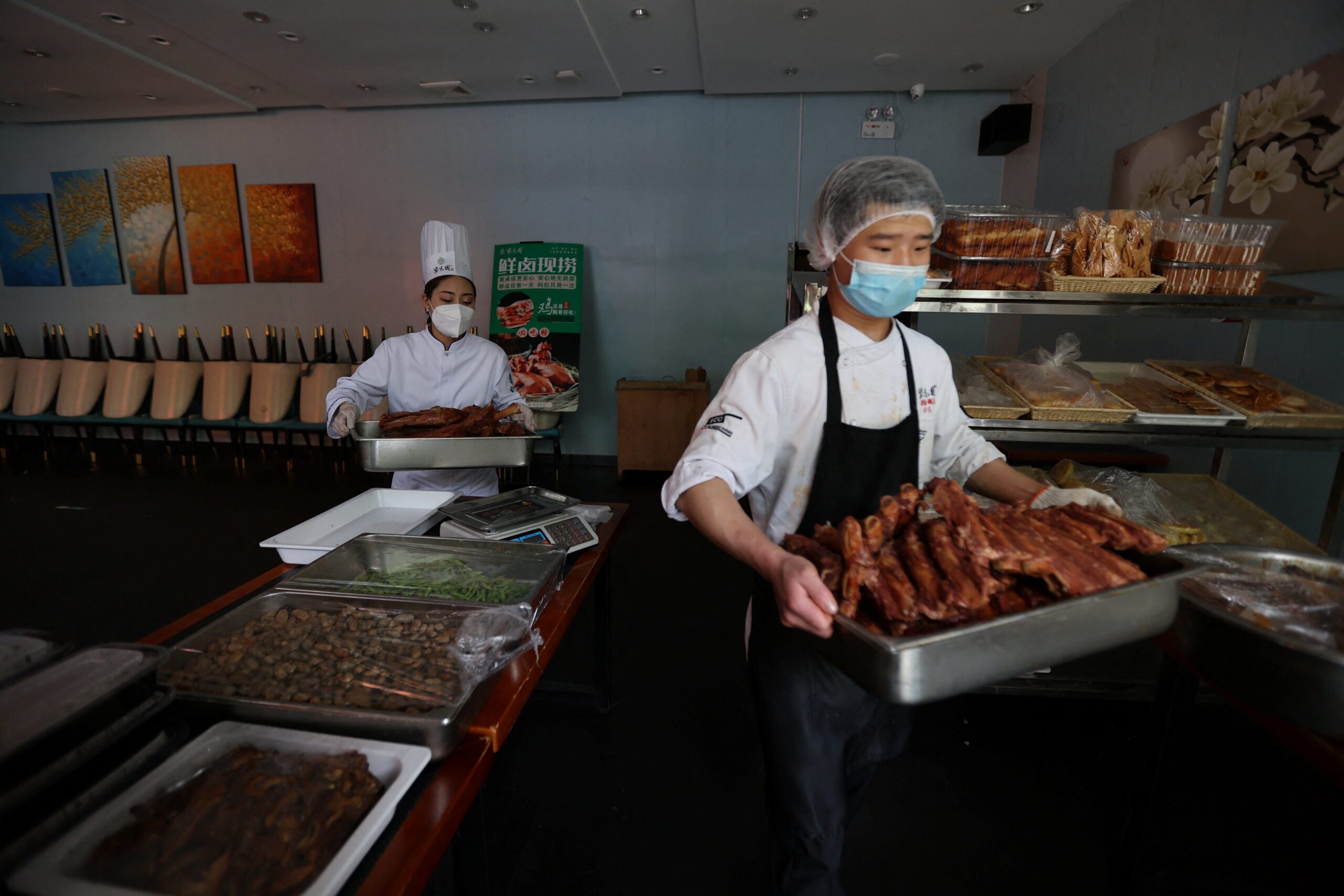 Staff members move cooked food to a stall set up outside a restaurant, after the city banned dine-in services amid the coronavirus disease (COVID-19) outbreak in Beijing, China May 17, 2022. Picture taken May 17, 2022.

Facebook Twitter Copy URL
Copied
Beijing's ban on dine-in customers means restaurants have to rely on takeaway to survive, so this restaurant put up stalls outside to carve the demanded duck for customers

BEIJING, China – As restaurants in the Chinese capital drift in the doldrums of a COVID-19 ban on dining in, one eatery manager and his army of chefs have set up stalls on the pavement to keep alive some of the old magic and drum up sales of their big seller, Peking duck.

The ban on customers eating in, imposed this month, means restaurants have to rely on takeaway to survive.

For customers of the Ziguangyuan Restaurant, the carving of the duck and slicing of its succulent crispy skin at the table was part of the dining experience.

Manager Zheng Po has set out to save that gastronomic spectacle, putting up stalls outside his restaurant so his takeaway customers can watch their duck get carved.

“Our Peking duck sales have even gone up,” Zheng, 35, told Reuters outside his restaurant as a queue of customers waited.

“Our sales of the ducks are even better than what they were before this round of COVID control measures.”

To meet the new demand for the takeaway ducks, Zheng’s chefs get to work at 6 am, two and half hours earlier than when the restaurant used to open its doors for sit-down diners.

The chefs roast the birds until they are a shiny, golden brown, ready for the first takeaway customers who arrive as early as 8 am.

One customer, who identified herself as just Zhao, said her priority during the pandemic was getting food on the table but she appreciated the effort to keep alive some of the old enjoyment.

“In normal times … customers are not only coming to eat but also want to experience the service too,” Zhao said before headed home with her duck.

The stakes are high for Zheng, who likened the effort to help his business to a battle. He declined to disclose his sales figures.

Even before the May 1 ban on dining in, Beijing’s hospitality sector had been rocked by COVID. In April, the city’s catering revenue plunged 25.33% from a year earlier, according to Reuters calculations based on January-April data from the city’s statistics bureau.

“My biggest wish is that the pandemic can be over as soon as possible so dining in can resume,” said Zheng. – Rappler.com