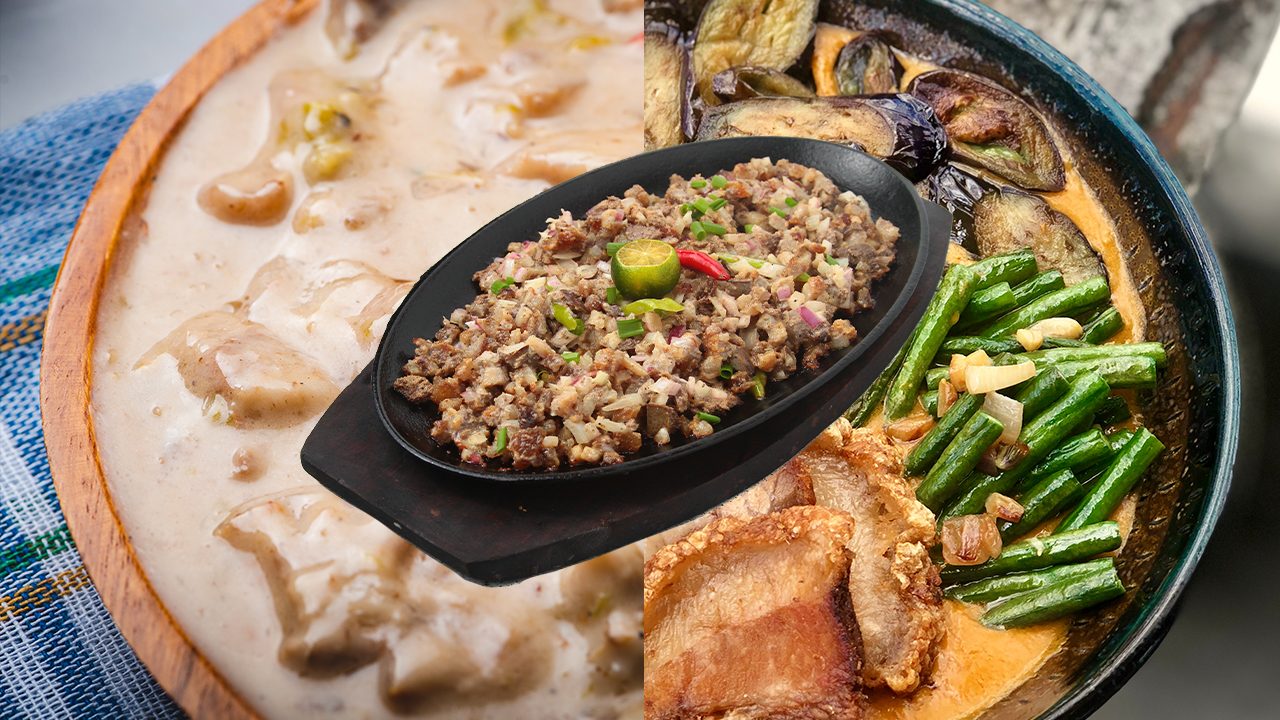 MANILA, Philippines – Ask around what the country should consider its “national dish,” and most Filipinos would probably answer the quintessential adobo or the crowd-favorite, “World’s Best Soup” sinigang. As accolade-worthy as the two dishes are, we thought it was high time to shine a spotlight on other unsung Filipino dishes just as deserving of both local and international recognition – just in time for Filipino Food Month!

It was a close fight between various regional dishes around the country. Kare-kare and sisig were neck-and-neck, followed closely by two Bicolano favorites – Bicol express and laing – fighting for second place. Pinakbet even made it to the top five! Our Rappler readers had a lot to say about which Filipino dishes they think deserve more time in the limelight – and here’s what they had to say.

Keep calm and kare-kare on

It was a nail-biting battle between the famous kare-kare and sisig, with the former amassing over 41 votes across Facebook, Twitter, and Instagram, and the latter gaining 39 votes.

Kare-kare is a popular centuries-old Philippine peanut stew that is said to have originated from Pampanga, the northwest province rich in culinary heritage and culture. Kare-kare typically uses oxtail and tripe, simmered in a thick peanut-based gravy, served with vegetables like sitaw, pechay, eggplant, and banana heart, with bagoong (shrimp paste) as a side condiment. It’s thick, creamy, savory, and rich – just how we Filipinos like our food. Plus, it’s perfect with and on rice!

Many readers raved about how much they love kare-kare, with one even calling it her “all time favorite.”

A reader also admitted that it may be popular among Filipinos, but the dish hasn’t gotten as much international fanfare as it should, unfortunately.

However, another reader said that if done right, kare-kare can easily be a frontrunner, alongside the ranks of sinigang and adobo.

“These ingredients are very Pinoy, and you don’t need to meat make it. It’s good for vegans, too,” he said, and that’s true! You can opt to just remove the meat and still let the peanut sauce shine, alongside the crisp, blanched veggies, and it would still be a winner in our hearts, meat or no meat.

Coming in a close second is another famous Kampampangan staple – and it’s sisig! This is a pulutan and ulam favorite, because it’s easy to eat and addictive to enjoy – think a savory-tangy, creamy, greasy, rich, and crispy meat dish, served on a sizzling hot plate and with calamansi. The dish’s name comes from “sisigan,” which means “to make sour” in old Tagalog. How can you argue with one of Taste Atlas’ 100 Best Dishes in the World for 2021? Sisig is made from chopped pig’s face, snout, and ears, where the bits are boiled and then grilled for a crispy-chewy texture. The pork bits are cooked with salt, pepper, soy sauce, vinegar, calamansi, and sometimes mayo and liquid seasoning, fried with onions, peppers, sili, and sometimes chicken liver. For extra guilt, sisig can also be topped with chicharon bits (pork cracklings), mayonnaise, and a raw egg.

Like most Filipino dishes, there are also different versions of sisig, which one reader said may be even better than the original version from Pampanga.

One reader even quoted the late Anthony Bourdain, food critic and travel host of Parts Unknown, who called sisig “the one” in 2017.

“I think sisig is perfectly positioned to win the hearts and minds of the world as a whole,” he said, calling it a great “introductory dish” to Filipino cuisine, because it’s “casual, accessible, [and] exactly what you need after a few beers.”

However, one reader also said that the reason why sisig may not be as known internationally is because it’s made from a pig’s head and face – a fact that usually turns foreigners off, as it sounds like too much of an “exotic dish.”

This dish is third, and we’re not laing

Thank you Pampanga, but it’s now Bicol’s time to shine! A region is also very known for their culinary contributions, Bicol is home to famously creamy, spicy dishes made from coconut milk. Naturally, a top favorite of our readers is the popular veggie dish, laing.

Laing is made from dried taro leaves, cooked in coconut milk/cream and with sili. Different versions exist – some include ginger, fish, and even pork, shrimp, or fish sauce. It’s simple in concept, but big on flavor, and explains why it was chosen by 23 readers!

Best of Bicol: Must-try dishes and delicacies when you visit Bicol 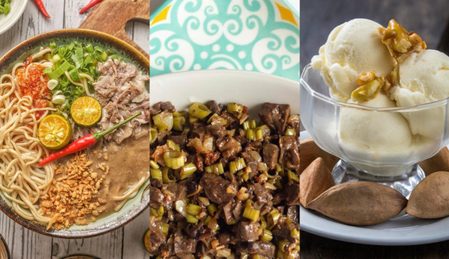 Following laing is another Bicolano favorite – the Bicol Express – with over 16 votes.

Typically made with pork, shrimp paste, tomatoes, onions, green chili, and coconut milk, this creamy and flavorful dish has the right amount of spice to give it a kick. A reader called it her favorite “authentic and organic dish.”

Found in almost all karinderya and restaurants in Bicol, this viand is best served with plain rice. What could be more Bicol than Bicol Express?

It’s a tie between…

Two native favorites are tied for fourth place, both with 15 votes each – the popular veggie dish pinakbet and the comforting chicken ginger soup tinola! A reader called both dishes “truly ours,” and yummy, plus healthy.

Pinakbet is a northern Filipino dish made from mixed vegetables, sautéed in fish or shrimp sauce. Fun fact: The name originated from the Ilokano word “pinakebbet”, which means “shrunk/shriveled” (which is how the veggies end up looking!)” For its protein, Filipinos add shrimp or lechon kawali. The veggies typically used are kalabasa (squash), sitaw, talong (eggplant), ampalaya (bittergourd), kamatis (tomato), sibuyas (onion), and okra.

Tinola, on the other hand, is a lighter and simpler Filipino soup dish made from clear broth from native chicken and ginger boiled together. The soup includes unripe papaya or sayote and malunggay leaves – but for one reader, she uses ampalaya leaves instead. It’s best eaten with white rice (like everything is) and a salty-sour condiment made from patis (fish sauce) and calamansi. It is a favorite comforting soup to eat on a rainy day, when you’re sick, or on any day of the week, actually!

Three Filipino favorites are tied for fifth place with nine votes each, and it’s bulalo and dinuguan!

Bulalo is a Southern Luzon beef soup with a light brown-colored broth, which is made from cooking beef shanks and bone marrow together, until the broth becomes slightly goopy due to the collagen and fat. The soup typically includes leafy vegetables, sweet corn, scallions, beans, onions, garlic, ginger, and fish sauce. Tagaytay City is known for serving some of the best bulalo; also because the cool city and its stunning views is the best place to enjoy a piping hot bowl of soup in.

The controversial and infamous dinuguan is a Filipino savory-tangy stew – sometimes called pork blood stew or blood pudding stew – made of pork offal and/or pork slices, simmered in a rich, thick, and spicy gravy of pig blood, onion, garlic, chili, and vinegar. Sometimes even pork innards are added. It can be eaten on its own, with rice, or with sweet puto.

In connection to bulalo, kansi was also a favorite dish of seven people, with one reader saying it combines the best parts of both sinigang and bulalo. It is, after all, an Ilonggo almost stew-like meat soup that’s gelatinous and soured with native fruits like batuan or bilimbi.

The last contender with also nine votes is a pescatarian favorite – kinilaw. Kinilaw is a raw seafood dish that is referred to as the Philippine ceviche, inspired by the Latin American raw appetizer. A reader called it the “oldest, purest, freshest, and easiest Pinoy dish,” and deserves recognition because it makes use of local ingredients we’ve had for over 600 years – local vinegar, salt, coconut milk, and fresh seafood.

Kinilaw is a fresh and sour fish dish usually made from raw cubes of ahi tuna or tanigue, marinated in vinegar, lemon, or calamansi, and chilled before enjoyed as a pulutan or appetizer. Other versions of the dish usually include chopped sili for some spice, cucumber, red onion, ginger, and/or bell peppers.

There were many other Filipino dishes to mention, but the other stand-outs with a handful of votes each include the “efficient” lechon paksiw with eight; beef caldereta with seven; binagoongan with six; and Ilocos region’s dinakdakan and lechon with five.

It’s hard to choose which ones deserve the most local and international recognition, because they all do, in their own ways. With the wide variety of dishes mentioned, it’s nice to see the breadth of Filipino regional cuisine, and how many people enjoy different kinds of dishes across the country. – Rappler.com

Get your fill of your favorite local dish using this GrabFood coupon code.