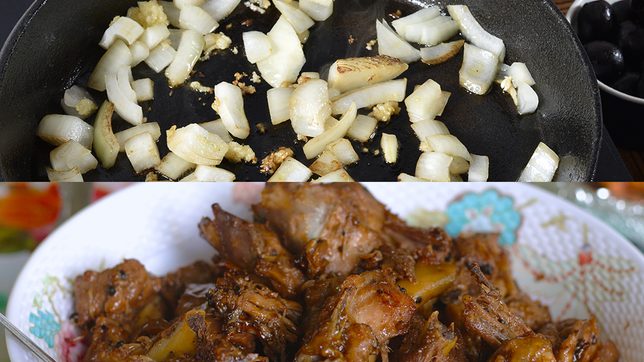 Did you know that adobo isn’t actually a dish, but a method of cooking? The word tapa isn’t just your favorite breakfast beef either, but is actually the technique of curing any meat.

The diverse world of Filipino cuisine comes with a myriad of Filipino cooking terms – some hailing from Spain and others from different provinces around the country.

Whether you’re a beginning home cook or just want to brush up on the wonderful world of Filipino cuisine, here’s a handy guide to a few popular Pinoy cooking terms you need to know!

Ginisa comes from the root word gisa, which means to stir-fry or sauté. To sauté means to quickly fry vegetables or meat in oil or fat in a pan over high heat.

In Filipino cuisine, almost all dishes start off with some gisa action, using the dynamic duo of bawang (garlic) and sibuyas (onion), with the addition of chopped kamatis (tomato) to make up the holy trinity of Pinoy cooking. It’s simple in technique, but powerful in flavor, making it a solid, reliable foundation of many Pinoy favorites. Pretty much anything can be gisa-fied.

Gata is the Filipino word for coconut milk – so creamy and sweet that you gata love it! Anything ginataan means it is “cooked, stewed, or simmered” in coconut milk.

Gata has become a staple ingredient in many Pinoy dishes, typically used in savory meat and vegetable fare, as well as in sweet treats. Bicolano cuisine is most known for championing the locally-sourced milk in popular dishes such as Bicol express, laing, pinangat, and kinunot.

Contrary to popular belief, adobo isn’t a dish, but rather “a process of cooking,” according to resident “Adobo Queen” and cookbook author Nancy Reyes-Lumen.

The dish depends on the kinds of sour agents you find in your area, which is why adobo is made in different ways almost anywhere you go around the country. Traditionally, adobo means to cook vegetables or meat in white vinegar, soy sauce, garlic, and peppercorns.

This is why adobo isn’t limited to just chicken or pork. Some other adobong favorites include adobong kangkong, adobong sitaw, adobong pusit (squid), adobong mushrooms, and even fish or shrimp. Some regions also like to include gata in their adobo meat dishes – you gata try it!

What did the fish say when it was under the sun? “I’m daing!“

Tito jokes aside, daing does mean exactly that – to be dried under the sun. Daing usually refers to fish that have been “sun-baked” after being split open, gutted, and salted for preservation. Some fish are also deboned before drying.

What you get afterwards is crispy, salty fried fish that you’ll be daing to have with vinegar, garlic rice, egg, and kamatis for breakfast!

If something is old and buro-ed, then that means it’s been fermented and pickled to your liking. Buro is the term for anything that’s been salted and sealed for a minimum amount of days. The most popular type of buro is Pampanga’s famous burong hipon dish, which consists of cooked rice, raw shrimp, and seasonings, fermented in salt until salty and tangy. Burong isda (fish) is also a well-loved Filipino dish.

Burong isda and hipon are usually enjoyed as side dishes, enveloped in fresh mustasa leaves; as dipping sauces for grilled meat or seafood; or even as ulam with rice. Burong mangga (pickled mango) is also a popular tangy side dish, made with sour green mango, sugar, salt, and water.

The word relleno, which means “stuffed” in Spanish, is exactly what Filipinos have been doing to various meats and seafood for years – stuffing them with all sorts of ingredients and spices until they’re ready to pop. Once stuffed with the works, the meat is either baked in the oven or pan-fried until done.

Rellenong bangus is a popular dish, where milkfish is stuffed with even more minced milkfish and other veggies. Rellenong alimasag is fresh crab stuffed with ground meat, crabmeat, veggies, and breadcrumbs, while rellenong pusit consists of large squid filled with ground pork and veggies.

The labor-intensive but celebratory staple of rellenong manok is a deboned whole chicken filled with almost anything a Pinoy can find in their fridge and pantry – cheese, luncheon meat, nuts, raisins, canned sausage, ham, eggs, olives, you name it! You can pretty much stuff anything you want with sheer will and determination.

The Tagalog word inihaw means to grill or roast, which has made many refer to inihaw as the Pinoy version of a barbecue.

Pork, pork belly, chicken, and squid are pre-marinated with a sauce that usually includes soy sauce, a sour agent, pepper, and sometimes banana ketchup. The marinated meats are then poked through skewers and then roasted atop a charcoal grill, giving your favorite inihaw na liempo or inihaw na pusit that distinctly charred look and familiar smoky, meaty flavor.

Putting the pak in paksiw is white vinegar, which is the main ingredient of the famously sour Pinoy paksiw dish. The term paksiw means “to cook and simmer in vinegar,” and can also include garlic, salt, and pepper.

Paksiw na bangus is a household favorite, typically made with bangus, ginger, okra, eggplant, ampalaya, green chili pepper, and other spices. Lechon paksiw is also a famous post-Christmas dish where lechon leftovers are king. The leftovers of the roast pig are resurrected in vinegar, garlic, spices, and bay leaves, with the additions of soy sauce, sugar, lechon sauce, and other seasonings at times.

The local version of the Latin American ceviche is kinilaw, a native preparation method that is translated to “eaten raw.” Seafood – mostly yellowfin tuna, tanigue, and even tahong (mussels) – are usually used for this tangy and sometimes spicy appetizer, whose star ingredient is local vinegar.

Cubes of raw fish are mixed in a light, vinegar-based dressing, along with chili peppers and other veggies like bell peppers, ginger, onion, tomato, and/or cucumber. The vinegar helps to “cook” the raw fish – leave the dish out for minutes and you’ll eventually see the pink fish turn white and chewy!

One of Bacolod City’s best blessings to the rest of the Philippines may just be chicken inasal, which means “roasted or char-grilled meat.” The Ilonggo term inasal originates from the Spanish word “asar,” which means “to grill.”

Inasal can be compared to inihaw, but the sauce used for inasal traditionally includes native coconut vinegar and calamansi. The marinated meat is also basted with achuete (annato oil) and then cooked on a hot charcoal grill, which gives off that famous red-yellowish color of authentic chicken inasal.

Inasal is an inclusive term, so even liempo, pork, beef, and seafood can get the inasal treatment.

Tapa is the general term for salted, dried meat that is usually cured before it is fried or grilled for consumption. When served with fried rice and egg, it is known as tapsilog, the favorite breakfast combo of sinangag (fried rice) and itlog (egg).

Is beef on the tapa your list? Chicken and pork can also be tapa-fied, as well as fish, which is usually refered to as tinapa (smoked fish). Tinapa na bangus or galunggong are popular choices. – Rappler.com