Facebook Twitter Copy URL
Copied
From Korean egg drop sandwiches and corndogs, to strawberry donut sandwiches and litson baka – which ones were your favorites?

MANILA, Philippines – Most of us remember the first year of lockdown by the quarantine food trends of 2020 – that year, we saw the swift rise of ube cheese pandesal, the whipping up of dalgona coffee, a plethora of sweet and savory fads like the burnt basque cheesecake, nacho/samgyup bake, and Korean cream cheese garlic buns, and many more. 2021 didn’t birth as many iconic food trends, but several home cooks and small home businesses still caught on to a few food fads that emerged throughout the year. Did you get to try any of these?

In March, we started seeing those aesthetically-pleasing, strawberry-filled “donut sandwiches” popping up on our feeds, and we definitely didn’t complain.

Different local businesses caught onto the hype, like Pufft Doughnuts, which came out with the Strawberry Monst, a pastry inspired by the Donut Man California’s strawberry doughnuts. A glazed donut is cut in the middle to make a sandwich, stuffed with a huge serving of fresh, juicy strawberries and a sweet strawberry jelly.

In April, more SMEs latched on, serving their own versions of the stuffed beauties; some would include fresh cream and/or other jams inside.

LIST: Where to get strawberry donut sandwiches for delivery Thanks to K-dramas and Filipinos’ obsession with anything cheesy, those huge, crunchy Korean corndogs made quite the buzz this year!

South Korea’s famous savory-sweet street snack treat is usually stuffed with sausage and/or mozzarella cheese, coated in thick breadcrumb batter (sometimes topped with potatoes), and then deep-fried until golden-brown and super crunchy. Sometimes luncheon meat is used inside, and at times, the corndog is dusted with sugar.

LIST: Where to get Korean corndogs for delivery in Metro Manila 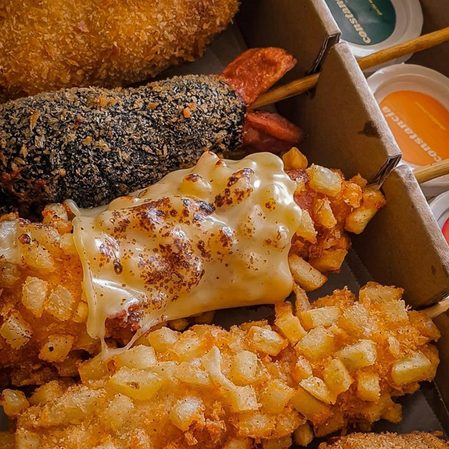 It’s likely you’ve seen this whopping sandwich on your Instagram feeds or on one of your favorite K-dramas (most notably, Hospital Playlist). Either way, the Korean egg drop sandwich quickly became a favorite for those into filling breakfast sandwiches and, of course, eggs.

LIST: Where to get egg drop sandwiches for delivery The popular South Korean snack has inspired local food businesses to create their own savory-sweet versions, using a variety of sauces, meats, and toppings. A basic egg drop sandwich usually consists of brioche toast, bacon, cheese, a creamy, sweet, mayo-based “egg drop sauce,” and either a runny sunny-side-up egg, or fluffy scrambled eggs. Some add sriracha to the mix, as well as other breakfast staples like hams, sausages, fresh veggies, and delicious additions like pesto, grilled chicken, and breaded fish.

The famous European dessert of creamy, caramelized custard has been around for decades, but local home bakers have recently been making use of it more often in their desserts. Apparently, creme brûlée’s melt-in-your-mouth consistency and caramel-y taste actually make it a great partner for cakes and even ube!

Baka naman! Finally, a classic Filipino favorite that isn’t a dessert also made the social media rounds this year – the litson baka. Andok’s, known for their litson manok and dokito, came out with a buzz-worthy litson baka offering mid-2021.

Leche flan never goes out of style, but the Filipino dessert seemed to stand out a little more this year. Home bakers got creative with the creamy, sweet, local custard, pairing it with donuts, cakes, and even with our favorite ube. We were blessed with the best of both worlds with a leche flan ube cake by home bakery The Tartoise. Local bakery Butternut MNL also took the trend on a more citrusy spin, serving up a seasonal leche flan dayap cake that we wish was available all year round.

Donut lovers also couldn’t get enough of leche flan donuts, which emerged early 2021 and were inspired by the Filipina-owned bakery Kora in New York. Plant-based is in, and several companies and local businesses have joined in on the eating trend this year. Following Burger King’s Plant-Based Whopper, OmniPork’s plant-based luncheon meat, and Shakey’s meat-free offerings late 2020, other brands followed suit, like Starbucks Philippines, which launched a plant-based line-up in January, and Army Navy in May. Kenny Rogers also went the plant-based route in June. Up for a throwback meal? Order now from foodpanda or GrabFood using these voucher codes.