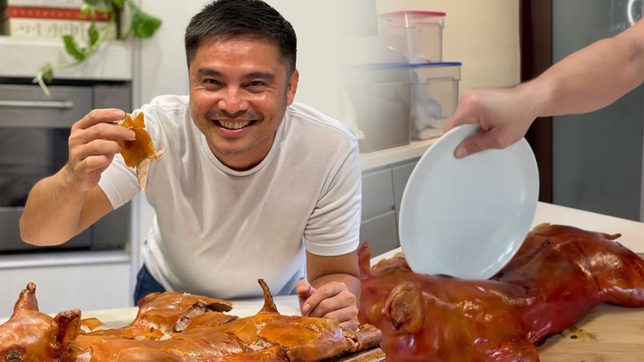 Facebook Twitter Copy URL
Copied
'I promise each one of you, we will do better,' the chef and entrepreneur tells the COCHI customers he 'let down'

MANILA, Philippines – Actor, chef, and entrepreneur Marvin Agustin took to Instagram to apologize to the disappointed customers he had “let down” over Christmas Eve and Christmas Day, after they complained about the poor service and subpar quality of their cochinillo orders from Agustin’s COCHI brand.

Agustin’s catering and cloud kitchen business, Secret Kitchen, posted the chef’s “apology and personal commitment” on Monday, December 26, apologizing to “everyone who was affected and inconvenienced by what happened.”

“To all the people we let down today and yesterday, we are deeply sorry and we will do right by you. We are now working on reaching out to each one of you, to address your concerns and requests,” he wrote.

According to comments on COCHI’s most recent Facebook posts, customers were unhappy with the quality of the cochinillo (roasted suckling pig) they received for Noche Buena and on Christmas – many complained that the skin of the cochinillo was makunat (chewy) and/or burnt, the small suckling pig was served flat, and that some parts of the pig were not fully-cooked and far from tender.

Others were also disappointed that reality didn’t match up to expectations. COCHI’s cochinillo, which ranges from P9,000 to P10,000, is described on Instagram as “juicy and crispy,” and is typically shown in videos as golden-brown and crunchy, with its skin cracked open using a plate.

(Christmas means a lot to everyone, especially after everything we’ve gone through this past year. That’s why it hurts me so much that we inconvenienced so many people yesterday and today).

Customers also complained that the calls following up their orders were not being answered, messages on social media were being ignored, and emails were not being confirmed right away. Many also shared that their delivery order came hours later, with one Facebook user sharing that hers came almost 12 hours late.

(It’s so wrong that we allowed ourselves to be overwhelmed with problems we didn’t expect, we lacked in service, and we failed to attend to your questions right away. Even though I’m hurt by what I’m reading, I’ve accepted all of it because I really was at fault).

Agustin asked his followers for another chance to show that it never was his intention to cause any problems or stress on anyone. He also said that the “series of unfortunate incidents” were caused by kitchen equipment breaking down, a glitch in their ordering system, and last minute cancellations of couriers due to several unforeseen reasons.

(I know this isn’t an excuse to not give you the service you deserve and expect. Especially on the day for which every Filipino family prepares for almost three months. That’s why it’s so important not to make a mistake).

Agustin said that he and his team had reached out to some customers whom he caused a “terrible inconvenience and an awful experience during the most important and special occasion the year.” He assured other customers that they would continue to hear from them in the next few days, as they were still gathering all information to address all concerns properly.

Several Facebook users advised COCHI, and other small businesses, not to accommodate “more than they could chew,” and to give customers the common courtesy of updating them on the status of their orders. More than an apology, other customers have also been asking for a full refund.

As of Wednesday, December 28, comments have been disabled on the Instagram posts of Agustin, COCHI, and Secret Kitchen.