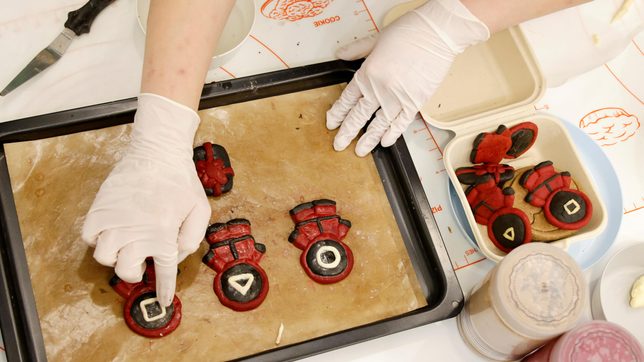 A South Korean pet cooking studio owner has started a baking class through which fans of Netflix’s Squid Game TV show can share the Halloween fun with their dogs by making them cookies.

The wheat-free dog treats come in the shapes of sugar candies popularized by the series, as well as the guards in pink jumpsuits and black masks who appear in the nine-part thriller, said shop owner Lee Jin-sun, who has a one-year-old Maltese poodle named Geumdong.

“We can’t go to Halloween parties these days (due to COVID-19). So, after watching the Squid Game, I came up with the idea of baking these cookies my dog loves,” she said, of the treats in which she uses rice and coconut powder instead of wheat, and beetroot and carob for coloring.

“It’s like a dog version of Squid Game. It’s so much fun and seems like the dog loves it too,” said Hwang Hye-won who joined Lee for baking class this week, offering a cookie to Geumdong dressed in a dog-sized costume, themed like the green tracksuits from the show.

Get pet treats for less when you check out using these Shopee promo codes.