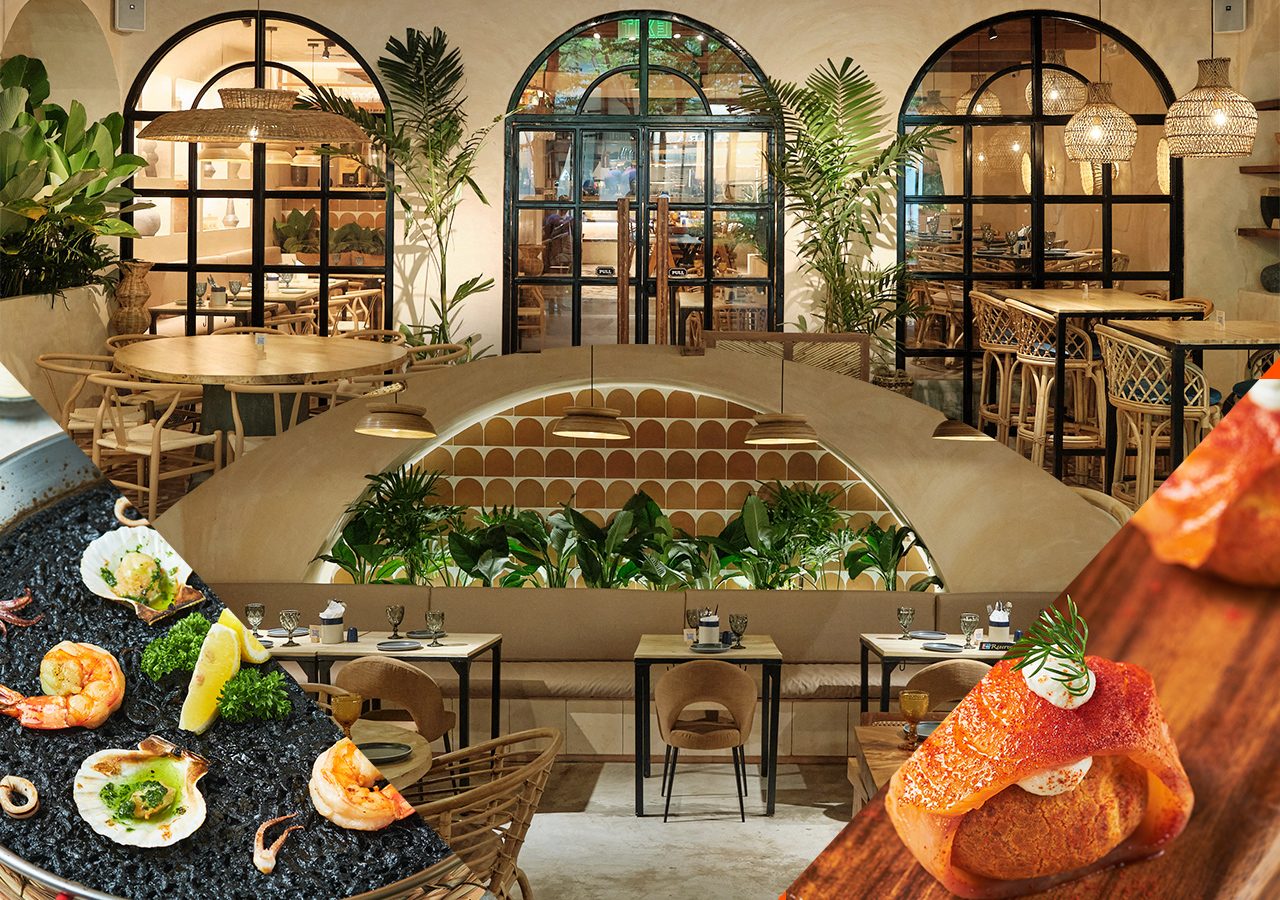 MANILA, Philippines – For some reason, Spanish food always tastes better when in the company of friends and a glass of wine (or two). For authentic tapas, craft cocktails, and a refined-casual dining experience, BGC’s new Spanish Mediterranean joint Terraza Martinez is worth a visit, next time you’re looking for a chill and classy spot for brunch or late-night drinks.

Terraza Martinez is the newest baby of the NIKKEI Group of Restaurants, which manages Japanese-Peruvian resto Nikkei and Asian restaraunt Sunae. Terraza Martinez is also the second Philippine baby of Spanish Chef Luis Martinez, following his first beachfront venture in Siargao called Alma, which he opened in 2020 after moving to the island. Since Alma (which means “soul” in English) is temporarily closed for renovations due to the recent typhoon, Chef Luis’ efforts are concentrated in ensuring Terraza Martinez stays as authentic, delicious, and true-to-his-vision as possible.

From the island to the city

Usually it’s a Manila name that’s taken to the islands, but this time, the popular beach staple Alma was brought to the city, due to popular demand and a chance encounter in Siargao between Chef Luis and NIKKEI’s two founders. After being introduced by a mutual friend, the group knew they “wanted to open something exciting in Manila from Siargao,” NIKKEI’s communications manager Monica Modomo told Rappler. In September, Terraza Martinez – which means “home of the Martinez family” – was born.

The BGC restaurant exudes coastal Mediterranean charm just from the outside, with its design inspired by the shores of Valencia, which is where Chef Luis hails from.

It’s a medium-sized, contemporary space that’s warm, cozy, and bustling with group conversations from the wide round tables and comfortable booth seatings all around. The sophisticated yet laid-back atmosphere is complemented by the Instagram-worthy interiors and tropical furniture, with terracotta accents and ocean hues.

The menu is a variety of rustic yet refined dishes, which also reflects the vibe of the dining space. “From the open kitchen, expect traditional techniques mingling with invigorating flavors,” Terraza said, which is all about “delicious new ways” to enjoy traditional Spanish fare.

Since Chef Luis is from Valencia, the hometown of paella valenciana, you’re guaranteed an authentic experience of the world-famous dish he mastered in his family’s kitchen at seven years old.

Inspired by his family’s own restaurant in Spain (also named Alma) in the past, Chef Luis brought to the Philippines his expertise in sourcing the best seasonal ingredients and cooking them as simple as possible, which is what Terraza Martinez should be rightfully known for.

Terraza’s menu is a varied mix of Spanish beef, pork, chicken, and veggie dishes, but what stands out the most is the seafood, which Monica said is the specialty of the restaurant. And I agree!

Following a mostly pescatarian diet, I was pleased to see that most of the dishes served for lunch had high-quality seafood at the center, sourced from both local and international waters (the razor clams and bacalao are air-flown from Spain every week). Nothing tasted malansa, fishy, chewy, or frozen – everything was fresh and noticeably made from scratch.

To start, we had one of Terraza’s Tapas Calientes (hot appetizers): the Vieras a la Piancha Seared Scallops (P520), which are premium scallops cooked in butter, garlic, parsley, and lemon juice. It was the perfect simple starter – the delicately-seared scallops were meaty, tender, and buttery, complemented by a clean and balanced butter sauce with a prominent pop of garlic and a subtle zing of lemon.

The seafood was cooked in a way that enhances its natural, clean flavor. Even with a flavorful sauce, Chef Luis still lets the main ingredients speak for themselves and shine.

The second appetizer was on the opposite end of the flavor spectrum, and also a must-try – Terraza’s best-selling flavor bomb, the Bombas de Salmon Curado Y Trufa / Cured Salmon Truffle Bombs (P650). “Bomb” is right, because all of its potent flavors explode at all at once in your mouth, yet still cohesively. Baked profiteroles are filled with a truffle cheese cream, topped with cured salmon, honey, and Spanish paprika.

Meant to be enjoyed in one hefty bite, you get both salty and sweet from the generous, buttery slice of smoked salmon and honey on top, tempered by the soft profiterole and elevated by the luscious yet light cream cheese filling inside with a truffle note. It’s a flavor journey, so enjoy and be surprised!

The third cold appetizer took us back the clean and tangy route – the signature Boquerones / Spanish White Anchovies (P495) are fresh anchovies in a tangy, herby dressing, topped with fresh green apple, green olives, olive oil, garlic confit, and served with flour tortilla crackers. I’m a fan of salty and acidic dishes (and garlic and olives), so I enjoyed this as both a palate cleanser and stimulator.

They’re not your typical store-bought anchovies and far from being fishy, mushy, or overly salty. The fish pack a bite, and are almost pickled in taste; plus, it goes well with your sommelier’s choice of white wine.

Next was another hot appetizer: Chopitos / Baby Battered Squid (P350), presented as a beautiful tower of fried seafood, fried onion rings, wild mushrooms, spring onion, cherry tomatoes confit, and mery sauce. Texture-wise, you’re getting good crisp and crunch, but taste-wise, we expected more – even with a squeeze of lemon, the breading could’ve used more seasonings and salt, as the taste was one-dimensional and just fried. Maybe a vinegar-based or aioli dip would’ve helped to add more flavor.

The Terraza Martinez experience isn’t complete without ordering any of the paellas. We tried the Paella Negra (P1,200), which is a reasonable price to pay for a pan good for three. The bomba rice is expertly cooked until moist and just the right amount of chewy, cooked in a rich, umami squid ink sauce and topped with well-cooked, tender prawns and soft scallops, served with lemon and garlic aioli on the side. Mix in some lemon juice and aioli into your rice and enjoy a creamier and more flavorful paella!

Terraza really knows how to do seafood well – each ingredient was well-cooked and fresh, especially the big chunk snapper used, which was fork-flaky-tender and moist. The bisque was good, but it could get nakakaumay if eaten continuously; maybe we were looking for some acidity to cut through its saltiness and richness. If you want only the fresh snapper’s taste to shine, maybe the grilled version would be better.

Terraza Martinez also has a few desserts on the menu, which includes the indulgent Chocolate Lava Cake (P350) – a chocolate souffle with mixed berries, streusel, and salted caramel gelato. Crisp on the outside but moist and warm in the inside, it’s a good take on the lava cake, but maybe the chocolate ganache inside could’ve been a bit silkier. The gelato deserves a shout-out, as it tempers the rich, warm chocolate inside, alongside the tangy mixed berries.

There was also Churros con Chocolate (P320), Spanish fried churros with chocolate sauce and cinnamon sugar. We could honestly do without this dessert, as the churros were too crunchy, thin, and hard that we didn’t really taste much of the soft and fluffy churro dough we were expecting. It was mostly just sugar.

Terraza Martinez’s prices are not exactly budget-friendly, but they’re very reasonable, given the serving size and quality offered. For an elevated Spanish restaurant, it’s slightly cheaper than other well-known tapas restaurants in the city, which makes Terraza Martinez a commendable weekend dining option I’d go back for and recommend to friends and family. What you see is what you get here – the photos in the menu look almost look just like the dishes served, and you know you’re getting high-quality, well-sourced seafood in every dish. Try it out next time you’re in the area!

Terraza Martinez is located at G/F Shangri-la at The Arcade, 5th Ave, Taguig City. It’s open from 11 am to 12 am daily. To book a table, you can check out Terraza Martinez on Instagram. – Rappler.com