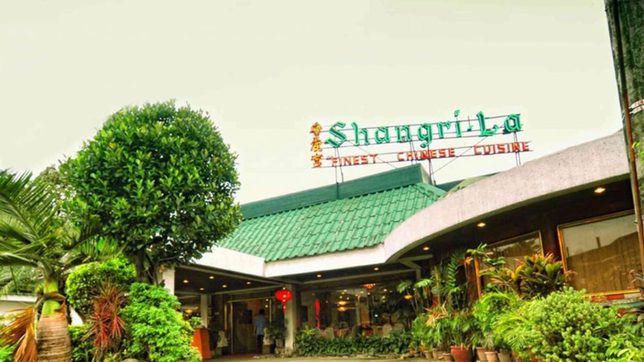 Facebook Twitter Copy URL
Copied
As the beloved Chinese restaurant announces its closure, here are a few facts to remember about the 37-year-old Quezon City establishment

When businessman Ramon Syhunliong founded Shangri-La Finest Chinese Cuisine in 1981, he knew close to nothing about the restaurant business. All he knew was that he wanted to create a place where he could combine his love for “fine dining and merrymaking.”

Through the years, Syhunliong turned that idea into one of the most beloved dining establishments in Metro Manila.

As it closes its doors after 37 years in business, we look back at the best stories – both about and from the iconic restaurant.

When Syhunliong first decided to open what we now know as Shangri-La Finest Chinese Cuisine, he used the bare bones of a dying restaurant along No.4 Times Street, West Avenue, thinking it would be marginally easier than starting a business up from scratch.

However, taking on a failed business was a challenge of its own.

One of the first steps Syhunliong did to overcome this was to first change the name into what we know it as today and to replace all the embellished chinaware with Noritake porcelain. By doing this, the restauranteur was able to successfully pivot the restaurant into an establishment that became a family dining spot and a premium events venue.

The legendary restaurant began with 10 people.

Like many great businessmen, Syhunliong knew his shortcomings in the kitchen and adjusted accordingly.

In Shangri-La Finest Chinese Cuisine’s early days, the restauranteur decided to take on the challenge of turning the restaurant into something profitable with only 10 people, one of whom was a Hong Kong-bred chef who was tasked to handle the food part of the business.

But as fate would have it, this chef fell into the temptation of the surrounding entertainment establishments within the vicinity and was unable to do his job properly. As a result, the second-in-command, Chef Fando, took over the reins of the restaurant and refined the food of the restaurant according to the original vision of Syhunliong.

The restaurant gets its name from the 1933 novel Lost Horizon.

The restaurant gets its name from a novel by James Hilton entitled Lost Horizon.

Founder Ramon Syhunliong wanted Shangri-La to be a place where “one finds inner peace, love, fulfillment, and longevity.” It was through this novel that the restaurant found its mission of giving customers a chance to visit a “gastronomical haven where one would find true happiness,” according to their website, and where “every dish [was] dashed with love.”

From a 10-man business, Shangri-La then turned into a family of 110 employees with over 1,200 seats ready for guests.

Legal battle vs the popular Shangri-La Hotel and Resorts chain

Prior to the 1992 opening of the first Shangri-La hotel in the Philippines, the Kuok group decided to file a case against the restaurant over the trademark for the logo and name of Syhunliong’s business, claiming it to be too similar to theirs.

The international chain argued that despite not being in the Philippines at the time, the group was already in business and already had a similar logo as early as 1972. However, Syhunliong fought to keep their name all the way to the Supreme Court, where it was ultimately decided in 2006 that Shangri-La Finest Chinese Cuisine had the right to use its name and logo.

Syhunliong was rewarded two million pesos in damages and 500,000 pesos in legal fees following the resolution of the case.

The restaurant has played host to Pope John Paul II and Philippine presidents.

Shangri-La Finest Chinese Cuisine has served a few notable figures in the past – one of them being the Blessed Pope John Paul II, who the restaurant had the honor of serving during his visit to the country for World Youth Day in 1995. To this day, Syhunliong says His Holiness was his “most memorable guest.”