a young caucasian man using his smartphone in the toilet while sitting in the bowl, with a roll of paper placed in a toilet paper holder in the foreground. Photo from Shutterstock

Heard about the chia seed-lemon juice “internal shower” drink? It’s going viral on TikTok and is being hailed as a digestion booster, constipation and bloating buster (particularly after travelling), detox drink, and hangover cure.

Advocates recommend you mix two tablespoons of chia seeds in a cup of water, add lemon juice, wait till the seeds start to absorb the water and form a gel, drink it on an empty stomach, and wait.

Chia seeds are edible seeds from a flowering plant of the mint and sage families. These tiny seeds (1,000 seeds weigh about 1.3 grams), pack a nutritional punch and are rich in dietary fiber, polyunsaturated fat, and protein. They also contain B vitamins (thiamin, riboflavin, niacin, and folic acid) and minerals (calcium, potassium, magnesium, and phosphorus). 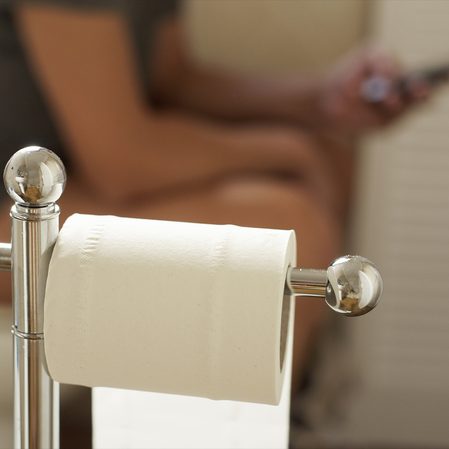 Before you rush out to get some chia seeds, be wary. The National Capital Poison Center in the United States urged caution, following the case of a person needing surgery after the gelled chia seeds became stuck and blocked his oesophagus.

Chia seeds can’t “boost” digestion. For most people, digestive processes run automatically, just like breathing and blood flow. So you can’t speed up the enzymatic processes that help with food breakdown, digestion, and absorption.

This claim is likely to be mixed up with constipation, which affects the time it takes for undigested food to travel though your gut and to your large bowel where it gets processed and turned into poo.

There are medical conditions, such as cystic fibrosis, where digestive enzymes can’t mix with food adequately and medicinal enzymes have to be taken orally. But this is very rare.

This claim is likely to be true, due to the very high fiber content of chia seeds.

Dietary fiber content of chia seeds varies from 23% to 41%, depending on the variety. Of that, 85% is insoluble fiber that adds bulk to stools and helps increase the transit time of bowel motions through your intestines. The other 15% is soluble fiber, meaning that it dissolves in water and remains intact until it gets to the large bowel. There, it is fermented by the gut microbes. This produces water that helps to keep your bowel motions soft.

Two tablespoons of chia seeds weigh about 20-25 grams, providing 9-10 grams of fiber, which is a lot compared to adult daily intake targets of 25-30 grams per day.

But chia seeds aren’t the only fiber-rich food.

So what are the signs you need to have a closer look at your diet?

If, over the past few months, you have experienced symptoms including lumpy or hard stools, incomplete emptying of bowels, straining to pass a bowel motion, or having fewer than three bowel motions per week, you could be constipated.

To address this, drink enough water so your urine is the color of straw.

Next, boost you intake of foods high in fiber such as psyllium, wholemeal and wholegrain breads and legumes (chickpeas, lentils, four-bean mix, red kidney beans, baked beans), as well as foods such as prunes, kiwi fruit, leek, onion, beetroot, Brussel sprouts, peaches, watermelon, and honeydew melon, and of course chia seeds. These high-fiber foods have all been shown to manage constipation.

If your bowel habits don’t improve, or have changed, see your GP. Bloating is the feeling your abdomen is under pressure due to gas retention.

Recent research has shown both people with a healthy gut and people with irritable bowel syndrome (IBS) had similar responses following consumption of a test meal, in terms of gas production and retention of contents in the stomach.

However, the researchers found people with IBS reported more symptoms related to the gas production, meaning their guts were more hypersensitive.

This suggests people with IBS may find gas production due to a chia “internal shower” uncomfortable or even painful.

There is no evidence chia or lemon juice, vitamins, or other remedies can cure a hangover.

Chia seeds contain thiamin and alcohol reduces thiamin absorption from the gut. However, a hangover occurs after you have had too much alcohol and so thiamin from chia seeds arrives too late to be used during alcohol digestion.

The best “cure” for a hangover is prevention.

Chia seeds are high in fiber. You can use them in recipes that taste better than the “internal shower” drink, such as chia banana pudding or a berry chia smoothie and that don’t pose a choking risk.

Clare Collins is a Laureate Professor in Nutrition and Dietetics, University of Newcastle.

[OPINION] The wonderful world of living an ordinary life

Kokando ‘pink pill’ is not for weight loss