Yes you can! Fitness tips from outside the comfort zone 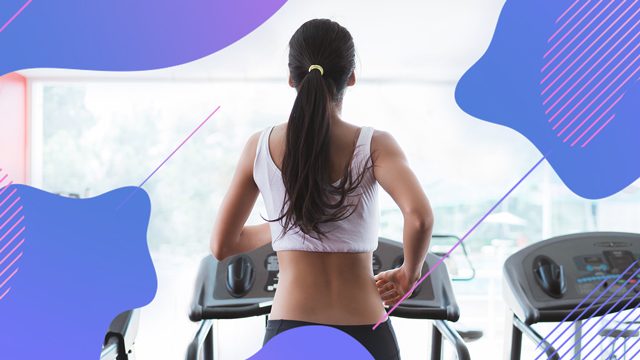 MANILA, Philippines – One day in July 2019, a few weeks away from my 30th birthday, I gave myself the shock of my life by knocking on the glass door of the gym below our office and signing up for a membership.

Five months later, in December 2019, I gave myself an even bigger shock when I weighed myself and discovered I was 137 lbs – exactly 23 lbs lighter than I was at the start of the year, closer to a normal weight for my height, and the lightest I had ever been in my entire adult life.

It felt like a small miracle. I was, after all, a girl whose below-average fitness and above-average laziness became part of her personality.

I took pride in being the kind of girl who lounged in bed eating Ferrero Rochers while watching her very fit best friend work out. I shared that Britney Spears “my lower back is killing me” meme on Facebook and delighted in the “haha” reactions it got. I paraded my bilbil in a bikini proudly as a big “f*ck you” to mainstream beauty standards. I made jokes about total strangers mistaking me for pregnant – even once took advantage of it when a conductor offered me the best seat on a crowded rush hour bus and I held my belly throughout the ride for good measure (admittedly, not my proudest moment).

As comfortable as I was in my fatness, I was also aware that I wasn’t very healthy. I experienced constant back pain and knee pain. My skin was sallow and dull and required an excessive amount of highlighter to look glowy. I couldn’t climb a flight of stairs without heaving. I loved the beach, but I couldn’t swim very far or deep into the open sea. I had always wanted to hike a mountain, but never felt physically able to. I can imagine my kidneys and liver could not have been too happy with all the fast food, sugar, and alcohol I was consuming. I woke up hungover too often, and the alcohol also made me not too well mentally.

When I signed up for the gym that day in July, I was evaluated by a trainer. He took my measurements using a fancy machine that took recorded not just my overall weight, but my body fat, muscle mass, and metabolism. The results of the evaluation made all the downsides of my unhealthy lifestyle more tangible: 44.9% body fat, 19.2 skeletal muscle mass, 25.6 BMI (body mass index), 65.6 kg at 5’3″.

The trainer also told me that my core was weak, my spine was uneven, my lower back was compensating for most of my weight (therefore pain), and my vital organs were surrounded by a thick layer of visceral fat – which put me at risk for more serious health problems.

At this point, I realized that being comfortable in my fatness didn’t mean I was happy.

More importantly, I feel stronger, more capable, more motivated to try new things, and more in control of not just my body, but my mind.

Like I said, when I look at my progress, everything feels like a bit of a miracle – except it’s not. As many weight loss and fitness experts have said before me in much more eloquent terms, getting healthy is just a matter of putting in the work, being patient, getting used to being uncomfortable, and sometimes tricking myself into making healthier choices.

Getting healthy isn’t easy, especially if you have a time-consuming career, a family to care for, or other underlying health problems. But it isn’t impossible, and if you’re committed, eventually, it’ll just become part of your new lifestyle. I’m no professional and I’m obviously not 100% healthy (I have a cookie habit I can’t seem to break) but here are a few things I’ve kept in mind that have helped me get to a point where I can look in the mirror and legitimately, proudly say: WHO IS SHE?!

You can’t change your lifestyle all at once. It’ll happen gradually

I may count July as the month that I really got into the full swing of getting healthy – but I made changes to my lifestyle long before that. In April 2019, I went cold turkey on alcohol – and I let that drastic change sink in before doing anything else. Around June, I started intermittent fasting and introducing myself to healthy food – and I waited ’til I got used to that before I decided to take exercise more seriously.

Changing your habits bit by bit just makes your health kick more sustainable – and makes the progress even more surprising and satisfying.

Prioritize how you feel over how you look

Throughout this whole getting healthy thing, I decided to focus on feeling great, as opposed to just looking good. Physical changes take a while to manifest, but that feel-good rush after working out is almost instantaneous. It’s been months since I started working out regularly, and while I’ve seen significant physical changes, I still have a pudgy belly and cellulite on my thighs.

If I focused on getting rock solid abs and a butt that could launch a thousand Instagram likes, I’d probably be more frustrated that I’ve put in so much work and my body doesn’t look like that yet. But my bilbil doesn’t bother me much because every time I work out, my muscles feel stronger, my mind feels clearer, my anxiety feels less overwhelming (disclosure: I’m also on daily medication) and I sleep better. This is way more satisfying – and much faster to achieve than the idea of looking like J.Lo in Hustlers.

It could be sugar, fast food, cigarettes. In my case, it was alcohol. I used to have a terrible drinking habit, so when I went tee-total it had a ripple effect on my health. Being sober helped me sleep better, so I had more energy to go to the gym. No longer waking up hungover kept me away from all the greasy hangover food. Also, no alcohol allowed me to keep my mental health in check, which puts me in a better state of mind to make healthy choices.

Aside from giving me a big leg up on being healthy, quitting alcohol became a sort of beacon whenever I strayed off the path a bit. If I indulged in too many cookies or went a while without working out, my sobriety gave me incentive to get back on track – if only because I don’t want to waste the effort of saying no to all the cocktails I wish I could drink. Also, remembering that I’ve done a very difficult thing – that is, completely cutting out something I truly enjoyed for my health – made getting to the gym on a lazy day seem like a cakewalk.

Attach a healthy habit to an existing habit

When I started going to the gym, I wanted to be the type of person who started each day with exercise. As someone who sleeps late and therefore wakes up late, this seemed impossible to do – until I made it a rule for myself to only shower after I’ve worked out. A daily shower was necessary to me, so going to the gym became necessary too. (Also, it helped a lot that my gym’s showers have hot water – a luxury that my condo doesn’t have.)

I know other people that have attached gym time to their TV viewing habits – they only watch an episode of a show they follow when they’re on the treadmill, for instance. Others have turned their daily commutes into an opportunity for exercise by biking to work. Whatever it is, find something you do everyday, and latch your workout to that.

Working out for 30 minutes or choosing a salad over chicken nuggets may not seem like a big deal, but if it’s not something you used to do, it’s worth celebrating. I’m not saying you should buy yourself a reward for every little thing you do (WHO HAS THE MONEY?). But pat yourself on the back and mentally congratulate yourself every time you do something good for your body.

Brewed your own coffee instead of drinking a sugar-laden 3-in-1? YAY. Lost half a pound? YAAAAAY. Climbed a flight of stairs without feeling like you’re on the brink of death? YAAAAAAAAAY. Did an extra rep with a heavier weight? YAAAAAAAAAAY. There’s nothing like the sound of a million internal YAAAAAYs to drown out that voice that’s calling you back to an unhealthy comfort zone.

Also, it goes without saying that if you hit bigger milestones (like achieving a fat loss goal, or being able to do a difficult yoga pose, or lifting a certain weight) you deserve more than a “yay” – perhaps a spa day, a new set of workout clothes, or a weekend getaway?

Getting healthy is a personal thing, and I can understand why anyone would wanna keep it private – and just shock the world months later by emerging as a brand new person. But changing your lifestyle is extremely difficult, and having people to cheer you on and hold you to your goals helps immensely and is almost necessary. Sharing your health binge could be a matter of joining a Facebook group, posting updates on Instagram, or partnering up with someone who also wants to get fit and healthy, which is what I did.

Whenever I’m not in the mood to work out (and this happens more often than I’d care to admit), I whine to my chosen person, who then reminds me that if I go to the gym anyway, I’ll feel better afterwards – and he’s always right. Whenever I make progress, I share it with him, and the excitement doubles, along with my motivation. When he makes progress, it’s the same thing.

When it came to exercise, I gave myself a bare minimum number of reps and sets per exercise (10 reps, three sets) and a minimum number of workouts a week (three days a week, two when I’m PMS-ing). When it comes to eating healthy, I set a maximum (one cookie or unhealthy thing a day but only if I must). These limits help when you’re really not in the mood to do this health thing. No matter how minimal your bare minimums are, they are SOMETHING – and that’s always better than nothing. At the same time, setting a maximum will keep your cravings in check and still give you control over what you eat.

When your old unhealthy habits get the better of you on certain days, it’s okay. I used to be overwhelmed with guilt every time I went on a no-exercise or binge-eating streak, and it would make me want to throw in the towel and just go back to being a couch potato.

I’ve since learned to remind myself that I intend be healthy for the rest of my life – so being unhealthy for a few days really doesn’t matter in the grand scheme of things. As long as your upper and lower limits are in place, you really shouldn’t feel guilty about lightly stepping back into your comfort zone every now and then. – Rappler.com