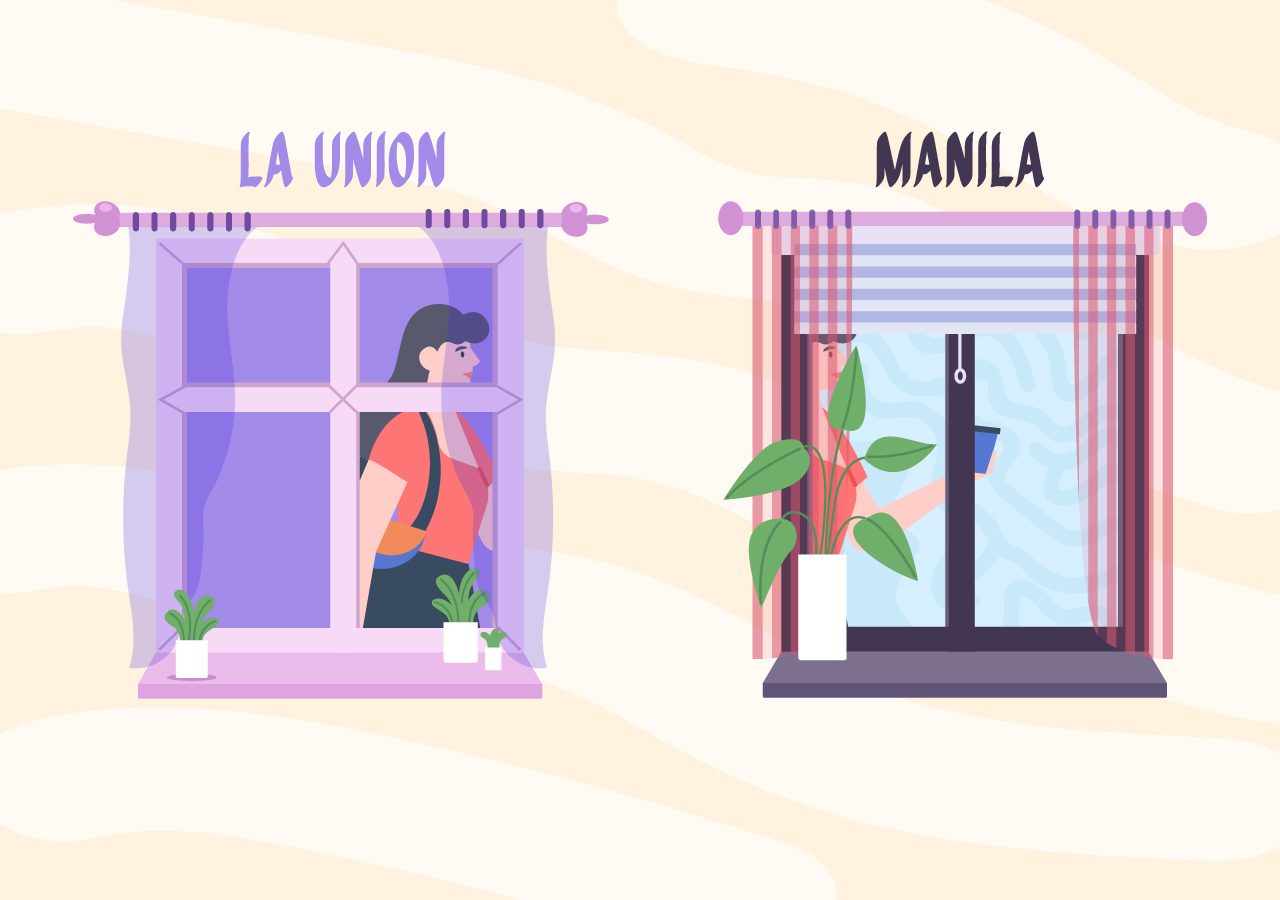 Facebook Twitter Copy URL
Copied
As companies return to offices in the city, some workers are doing everything they can to keep the life they’ve built near the sea

MANILA, Philippines – La Union is some four hours and 270 kilometers away from Metro Manila – a tiring drive made even more challenging by the steep rise in gas prices. But this is the journey that some La Union residents are making at least once a week, as their offices have called their employees to return to the office.

Erika Dionisio is a business development coordinator who works for an international law firm based in Makati. Since July, she’s been traveling back and forth from La Union to Manila as her company transitions to a hybrid set-up where employees are encouraged to work in the office three times a week.

Without a car, Erika takes the bus, though some weeks she gets lucky and carpools with friends.

Erika grew up in Quezon City, but moved to La Union in November 2020, in the early days of the COVID-19 pandemic.

She had been living alone in a 25-square meter condo in Makati, where the hard lockdown had been taking a toll on her health, both physically and mentally.

(It was getting claustrophobic. It was really not helpful to my mental health because I was alone. I couldn’t go out because of course, we were afraid to go out. There was a park in front of us but it was still scary to go out. It was very strict in Makati during that time…everything was closed everywhere.)

She also shared that she even developed a skin disease, a vitamin deficiency caused by the lack of sun that turned her skin red.

In those days, she joined a gym just to have something to do, but the gym closed down. Without anything else to look forward to, she ended up just working for up to 16 hours a day.

“Parang naisip ko, wala naman ibang gagawin eh (I thought, I had nothing else to do)…what would I do? Social media? Netflix? So sobrang intense na (it was really intense),” she said.

Her friends also noticed that her lifestyle was no longer healthy for her, so they pushed her to move to San Juan, La Union, the North Luzon surftown, where they were living.

Pre-pandemic, Erika was a La Union regular. Before starting at her current company, she would visit surftown and stay for a month at a time, drawn by the surf.

Even when she started her job in 2018, she made it a point to go up to La Union every weekend. She would take the bus as soon as she clocked out from work, go straight to surf when she arrived in La Union, and head back to Manila early on Monday morning and go straight to the office.

As someone who frequented La Union, moving there was a natural choice. It wasn’t easy because at the time, border control was strict, but as soon as she found the opportunity, Erika went for it.

She was overwhelmed for the first few days as she got used to surftown’s vibrant social scene. After a while though, she was able to relax and create a healthy routine for herself.

Moving to a place right in front of the beach, she was able to surf regularly, or if there were no waves, she’d watch the sunset. Her next door neighbor was also very active, so they’d go to the gym together or run.

Aside from being healthier physically and mentally, she found that living in La Union was also easier on the pocket.

(My lifestyle became fit, and my food became healthy because at that time, there were no fast food deliveries. So you’d really buy home-cooked food, or cook yourself. Cost of living was really cheap.)

“It saved me basically,” she said.

Like Erika, Allen Aligam, who works for an IT company based in Bonifacio Global City in Taguig, has been living between La Union and Manila after his company required employees to go back to the office twice a week.

Sometimes he carpools with other people, but when he can’t find a ride, he drives, leaving for Manila on Monday afternoon and heading back to La Union on Wednesday night.

Allen also moved to La Union full-time during the pandemic. He first visited surftown in 2010, after making friends with La Union residents while doing relief ops for Typhoon Ondoy. By 2014, he was renting out a house with friends, and they would travel there every weekend, or every other weekend.

As a surftown regular, it was a no-brainer for him to finally move there full-time. In Manila, he lived with his mother, who is high-risk for COVID, so he hardly went out. Instead, he stayed indoors and played video games in between work.

He made the move in February 2021, and has not looked back since, only visiting Manila twice in the span of over a year, once to get vaccinated, and again for the holidays.

From staying mostly indoors in Manila, Allen is able to go out more in La Union, where he also practices his hobby, sports photography, shooting surfers and cyclists.

(In Manila, where can you go? There’s nowhere to go. In La Union, you just cross the street and there’s a beach. You can bike, there are so many places to go to. You can walk along the beach and there’s so many things to see. It’s more relaxing than just staying home, right?)

He also shared that he is able to do more with his time when he is in La Union. He gets to start and leave work earlier there, and he is able to catch the sunset because the beach is nearby. In Manila, he shared, he’ll get up early, but will get to the office at around 9 am because of traffic. Likewise, even when he logs out early, he’ll still get home late.

Harder than it looks

While it seems like Erika and Allen are managing the long commute, their set-up is not without its challenges.

“Nagstart ako (I started) second week of July, and it’s really harder than what I imagined. Pinicture ko siya na (I pictured it like) ‘okay I’ll take the bus,’ but it’s way harder,” Erika shared.

Mainly, there is the matter of cost. As Allen explained, when he drives from La Union to Manila he spends about P2,000 on gas and P750 on tolls – and that’s just one way. To save money, he carpools with others or lets other people ride with him, but that isn’t always guaranteed.

Erika also carpools when she can, but relies on the bus as her main form of transportation. Because booking a direct route from Manila to La Union isn’t possible online, she has to buy a ticket all the way to Vigan or Laoag, which costs siginificantly more.

Because they’re spending half their time in Manila, their cost of living has also increased.

“I think my budget for one week in La Union is just two days in Manila. Ganun kamahal yung bilihin (that’s how expesnive things are),” Erika said.

On top of that, she is also still paying rent for her condo in Makati, though she is just waiting for her contract to end before she lets her place go and shares an apartment with her colleagues who are also living in the province.

Aside from the financial aspect, Erika is also worried about her carbon footprint.

“An honest concern is emissions, yung carbon footprint ko talaga (my carbon footprint). Imagine, to go there and back, ang dami kong ineemit na carbon kasi (I emit a lot of carbon because) I have to travel,” she said.

Despite the challenges, both Erika and Allen are set on staying in La Union and making their current set-up work. Moving back to Manila is not an option.

Allen says it’s better for his mental health to be able to go home to La Union.

“Walang gagawin dito (Manila) eh. Literal na work lang,” he said. He added that in La Union, it’s more laid back and relaxed, and there’s plenty to do and see.

(If you want to go to the beach, it’s right there. If you want to go to the mountains, it’s there. Everything’s accessible. Here in Manila, you need to make more effort to go around because first of all, it’s traffic and nothing’s close by. When you’re in La Union, in less than five minutes, you’re at the beach. In ten minutes, you’re in the mountains. In 30 minutes, wateralls. Right? In a few hours, you’re in Ilocos already.)

Erika shared the same sentiments, saying that after changing her lifestyle in La Union, she can no longer see herself living in Manila.

“I tried na 10 days ako nagstay in Manila, and hindi na talaga siya fit sa lifestyle or life that I want kasi what I wanna do, hindi siya available in Manila. There’s no nature…it keeps me sane dito sa La Union,” she said.

(I tried staying in Manila for 10 days, and it’s really not fit for my lifestyle or the life that I want because what I wanna do isn’t available in Manila. There’s no nature. It keeps me sane here in La Union.)

As return-to-office policies lead to a “great resignation” among Filipino workers, it’s almost incredible that professionals like Erika and Allen continue to make the effort to show up to work as required.

But as Erika shared, it also comes down to her love for her job.

“I think it’s also a factor that the law firm that I work for is very pro-human. Spoiled kami (we’re spoiled), I realize. Everything was provided for during the pandemic,” she said. “So it’s worth it na magbalik-balik (that I go back and forth) because I can’t give up the benefits of my job and I also can’t give up my life in La Union.” – Rappler.com