Are the people rising up against their urban overlords, demanding fair treatment in the form of fair ice cream prices for all?

Or, rather insidiously, has a foreign ice cream presence been planted in the Philippines to spark internal unrest?

The answer to all 3 is a resounding no. 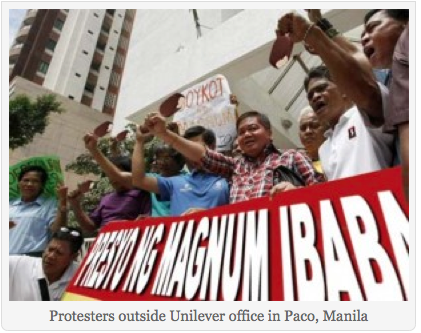 PROTEST? Screenshot of photo from So What's News article.

As absurd as those claims sound, a few people actually believed the hoax article "Unilever Asked to Rollback Prices of Magnum After it was Discovered to be Overpriced."

Hosted on the satirical wordpress blog 'So, What's News?' the article joked that consumers were up in arms outside the ice cream maker's office, since ordinary citizens couldn't afford to buy the treat, especially after the recent hike in Jeepney fares.

Operated as a joint venture between RFM Foods Corporation and Unilever, with the majority share held by Unilever, Magnum ice cream is in the premium price bracket. At sometimes over P50 a bar in local convenience stores, Magnum is nearly 2x the price of a Cornetto, another Selecta product, and at least 2.5x the price of local staples like Pinipig and Double Popsicle.

"Consumers cannot justify a P50 price tag when jeepney fares have increased by 50 centavos," was the supposed quote of  Department of Trade & Industry Secretary Gregory Domingo who was reportedly heading the charge against the ice-cream to protect consumers.

But his hands were apparently tied by the dreaded anti-consumer Ice Cream Deregulation Law (RA 8479-M). Some may have thought that in such a hot country, the ice cream lobby was understandably very strong.

The secret documents investigating Unilever were perhaps the most laughable part of the article. Though the suggested retail price (SRP) was meant to be P14.75 the article said the company settled on a higher entry point of P50 to make the glorified Pinipig seem more special. 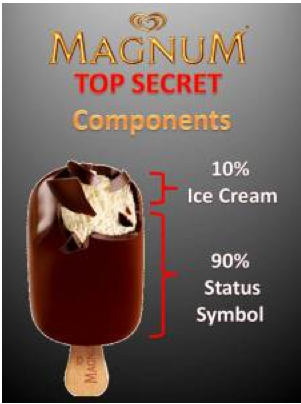 ELITE TREAT. Some social media users have complained about the high cost of Magnum.

Screenshot from So What's News? 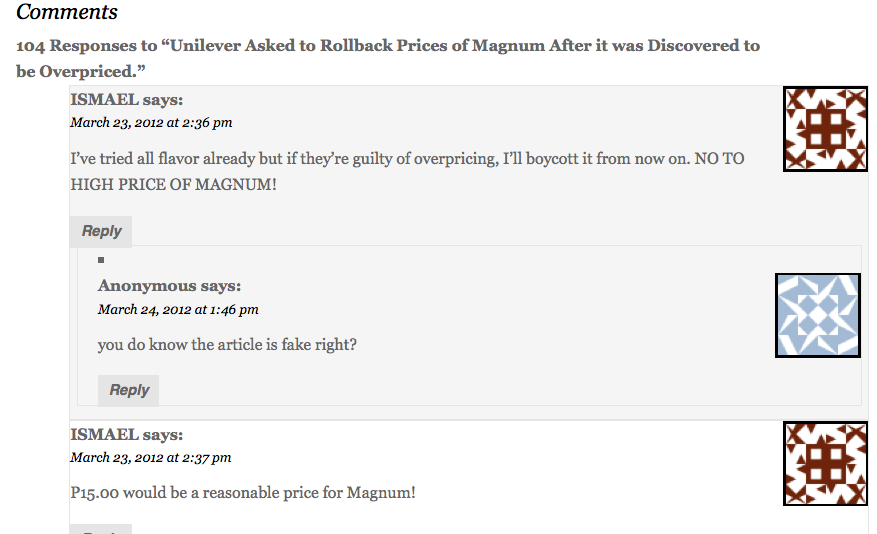 Some social media users are already saying the ice cream debate has been blown out of proportion. Eric Patrick Mercado tweeted, "It's just ice cream."