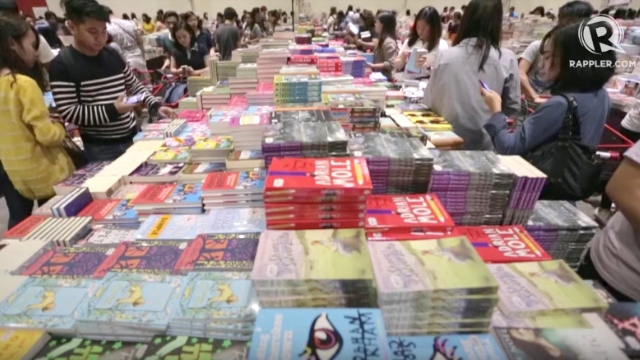 After successful sales in Manila, Cebu, and Davao in 2018, it’s no surprise that Big Bad Wolf is returning to the Philippines this year, again with the promise of 2 million books to choose from at 50% to 90% discounts.

This year’s sale will run for 11 days, and, just like last year, Big Bad Wolf will be open for 24 hours – in case you feel the need to go shopping for books at 3 am.

This time around, bookworms can expect a much better selection that is more tailored to Filipino tastes.

In an interview at the Big Bad Wolf media briefing on January 29, founder Jacqueline Ng told Rappler that they curate the selection of books for every country where they hold the sale, but because last year was their first time in the Philippines, they had to make some assumptions in their selection.

“Now we have a better understanding of what Filipinos like. So definitely the selection this year will be better than last year,” Jacqueline said.

“We change [the selection for every country]. The thing is, if we go for the first time, we don’t know. We estimate or we presume certain things. So now we have actual sales history to show us, so we’ll be better in selecting books for Filipinos,” she added.

She also said that the selection is specific not only to the Philippines, but to each city that the book sale will be held in, from Manila, to Cebu, to Davao.

As Jacqueline said, children’s books are still a big hit with the Philippine crowd. What’s particularly exciting on Big Bad Wolf’s children’s shelves are the Little Hippo augmented reality (AR) books that will be on sale.

The books breathe new life into classic kid’s stories such as Three Little Pigs and Goldilocks and the Three Bears, by making them AR-ready. When you read the books through the Little Hippo app (which can be downloaded for free!), there are special visuals that pop out, making story time extra magical for little kids.

Aside from the kids’ books, there will also be a generous selection of grown-up reads that range from fiction, to reference books, to graphic novels, to coffee table and special interest books.

This year, the Big Bad Wolf Book Sale in all 3 venues will be staffed by people from Gawad Kalinga (GK) communities. According to Jacqueline, they decided to hire staff from GK after they brightened up the sale in Cebu last year.

“The middle-aged ladies, they are so dedicated to work, they are more responsible. They treasure the opportunity to work so they work even harder. At the same time, they are so happy. Did you know they were singing and dancing? Some of the cashiers, suddenly they would break into a cheer. It really made the whole atmosphere so different, it really made the customers so happy,” Jacqueline shared.

She said that aside from hiring people from GK communities, they will continue supporting the non-profit organization by helping build libraries and donating a portion of their profits from the book sale.

The Big Bad Wolf Book Sale happens from February 22 to March 4, 2019 at the World Trade Center in Pasay City. Admission is free.

The organizers will be hosting a VIP day, where select followers can get first dibs on books before the sale officially starts. Those who want to win passes to the VIP day can check out Big Bad Wolf on social media. – Rappler.com