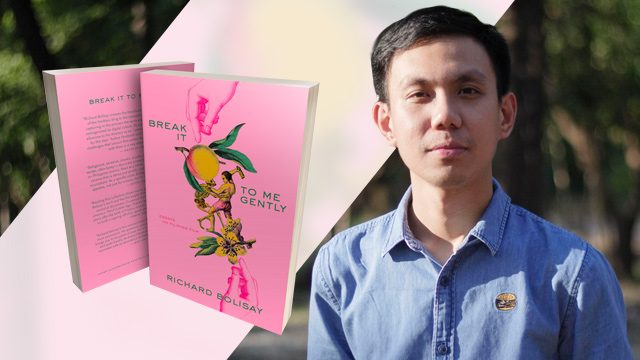 Facebook Twitter Copy URL
Copied
The book, by Richard Bolisay, will be launched on October 19 at QCinema festival.

MANILA, Philippines – My career as a writer started in criticism (or reviewing/film blogging, if we don’t want to be too academic). This was roughly around 6, 7 years back – already well into the height of Philippine independent cinema.

Then a student (and really without experience in writing about movies outside of personal musings and kuda), I looked to the industry’s top brass as my guide. From the writings of Noel Vera, which I would see in the UP Main Library; to the late great Alexis Tioseco’s Criticine; and to the blogs of Dodo Dayao, Oggs Cruz, and, the youngest of the bunch, Richard Bolisay.

Dodo Dayao put it best when he described Bolisay’s writing as “belligerent, abrasive, chaotic, erudite, incisive, emotional, sometimes tender, often funny…As a specific voice, [his] resonates with a voracious appetite, not just for cinema, but for language and for discourse.”

Today, the landscape of Filipino film criticism may not be as healthy as it once was. The more senior have mostly moved on, without the young to pass their batons too.  (I could only speculate the reason, but probably, like me, many aspiring critics either got tired, settled for tweeting, and/or abandoned their ambitions altogether.)

It brings me a certain nostalgia, however, to learn that Bolisay will be releasing his first book, a collection entitled Break It to Me Gently: Essays on Filipino Film, this October.

Break It to Me Gently is a collection of Bolisay’s full-length and capsule film reviews from 2007 to 2017 – a period gobsmacked in what many fondly call “Third Golden Age of Philippine Cinema.”

The write-ups in the book are classified under “Reviews,” which are lengthier pieces on local films and were selected for their insight and character; and “Dispatches,” reports from film festivals, which Bolisay describes as “for better or worse, have been the lifeblood of the industry over the past decade.”

Through this culled, curated, and edited set of essays, Bolisay aims to reveal not only his valuation of each film but, on a macro-level, the spirit of the milieu.

As the book puts it, “[It is] a reminder that no text exists in a vacuum, and more importantly that it is an artifact of its time, and as such its analyses is also necessarily a capture of the socio-political period in which it exists.”

Break It To Me Gently: Essays On Filipino Film is published by Everything’s Fine and is co-funded by QCinema Film Festival.