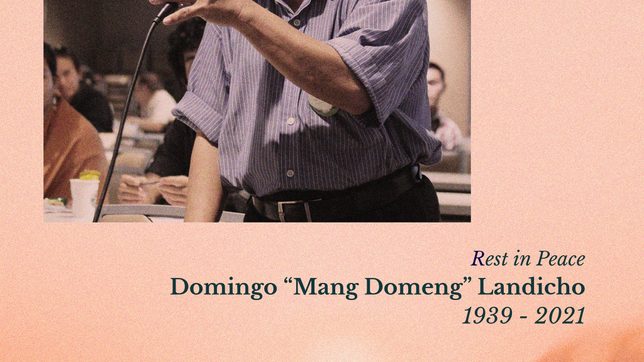 Likhaan: University of the Philippines Institute of Creative Writing's Facebook

Filipino writer and professor Domingo Landicho died on Thursday morning, July 29, at the age of 81, his family confirmed.

“It is with great sadness that on behalf of our family, I am confirming the passing of my dear husband, Domingo Goan, Landicho, at today at 8:45 am,” playwright and theater director Edna May Obien-Landicho announced in a Facebook post on Thursday.

“We thank all those who have been a part of his life. We ask for prayers for the repose of Domeng’s soul,” she said, adding that wake arrangements will be announced once finalized.

The University of the Philippines Institute of Creative Writing, where Landicho was a resident fellow, posted a tribute to him in a Facebook post on its official page.

“Mang Domeng, from everyone here at the UP ICW, thank you. May you rest in peace,” the institute said.

Landicho was born on August 4, 1939, in Luntal, Taal, Batangas. The renowned writer, playwright, academic, and actor is credited with helping shape Philippine literature through the years.

Among the many notable published books and pieces by Landicho is Supremo, a drama play he co-wrote with wife Edna about the country’s revolutionary leader, Andres Bonifacio. He also wrote several plays for the Philippine Educational Theater Association (PETA), two of which were performed at the Raha Sulayman Theater in Intramuros and at the La Ignaciana.

Landicho, a recipient of the prestigious SEA Write Award or Southeast Asian Writers Award in 2003, was also a multi-Palanca awardee. He won the Carlos Palanca Memorial Awards Grand Prize for his novel Bulaklak ng Maynila (Manila Blossoms), which was turned into an award-winning movie in 1999.

Landicho was Professor Emeritus at the UP Departamento ng Filipino at Panitikan ng Pilipinas in 2005 and Director for Asia of Poet Laureate International.

Fellow writers and institutions paid tributed to Landicho online following the confirmation of his death.