DEKADA '70. The English version of the acclaimed novel is available through author Lualhati Bautista, though she recently shared that she got an offer from Penguin Classics to publish the work.

Facebook Twitter Copy URL
Copied
The international imprint makes an offer to publish the English edition of the Martial Law novel, currently published by the author herself 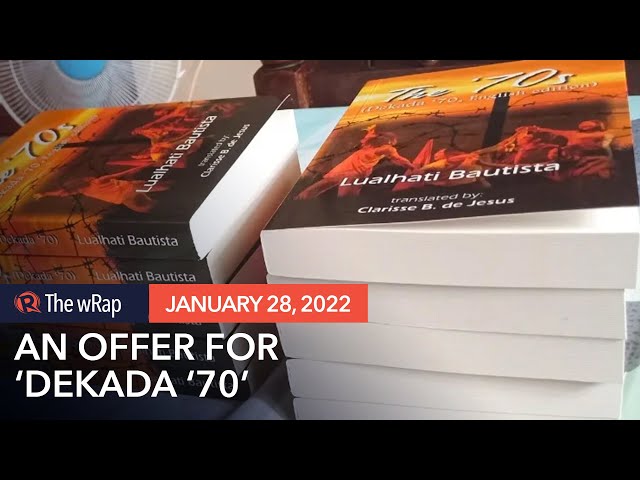 MANILA, Philippines – Writer Lualhati Bautista has apparently gotten an offer from Penguin Classics to publish her landmark novel Dekada ’70 under their imprint.

On her Facebook page, the writer shared an excerpt from an email she said she received from Penguin Classics publisher Elda Rotor on January 5.

In the email, Rotor said that she was “intrigued by the work and its impact and study in Philippine classrooms.”

According to the post, Rotor, who read the English translation, “found the Bartolome family’s story in the era of Martial Law, especially from the mother Amanda’s perspective, very moving, timely, and propulsive and see the potential for your classic for a wider English-language audience, especially students, outside the Philippines.”

She then went on to ask Lualhati if she was interested in publishing the novel as a Penguin Classic.

The writer didn’t share her response in the post, but said “Bakit ba ngayon ko lang ito naisipang ipagyabang – este, i-post (why did I only think of boasting about – err, posting this now).”

Originally written in Tagalog, Dekada ’70 tells the story of a middle-class family living through the dangers of Ferdinand Marcos’ dictatorship in 1970s Philippines.

It places particular focus on the experience of housewife and mother Amanda Bartolome, who watches her sons grow up and take on different paths under Martial Law.

The novel won a Palanca Award in 1983, bagging the grand prize for novels written in Filipino. It has also since been turned into a film, starring Vilma Santos as Amanda.

The English edition, translated by Clarisse B. De Jesus, is currently self-published by Lualhati, and can be bought through her.

Penguin Classics is an imprint of  British publishing house Penguin Books that publishes classic literature from around the world, from ancient texts like Virgil’s The Aeneid, to contemporary works such as Nineteen Eighty-Four by George Orwell. – Rappler.com