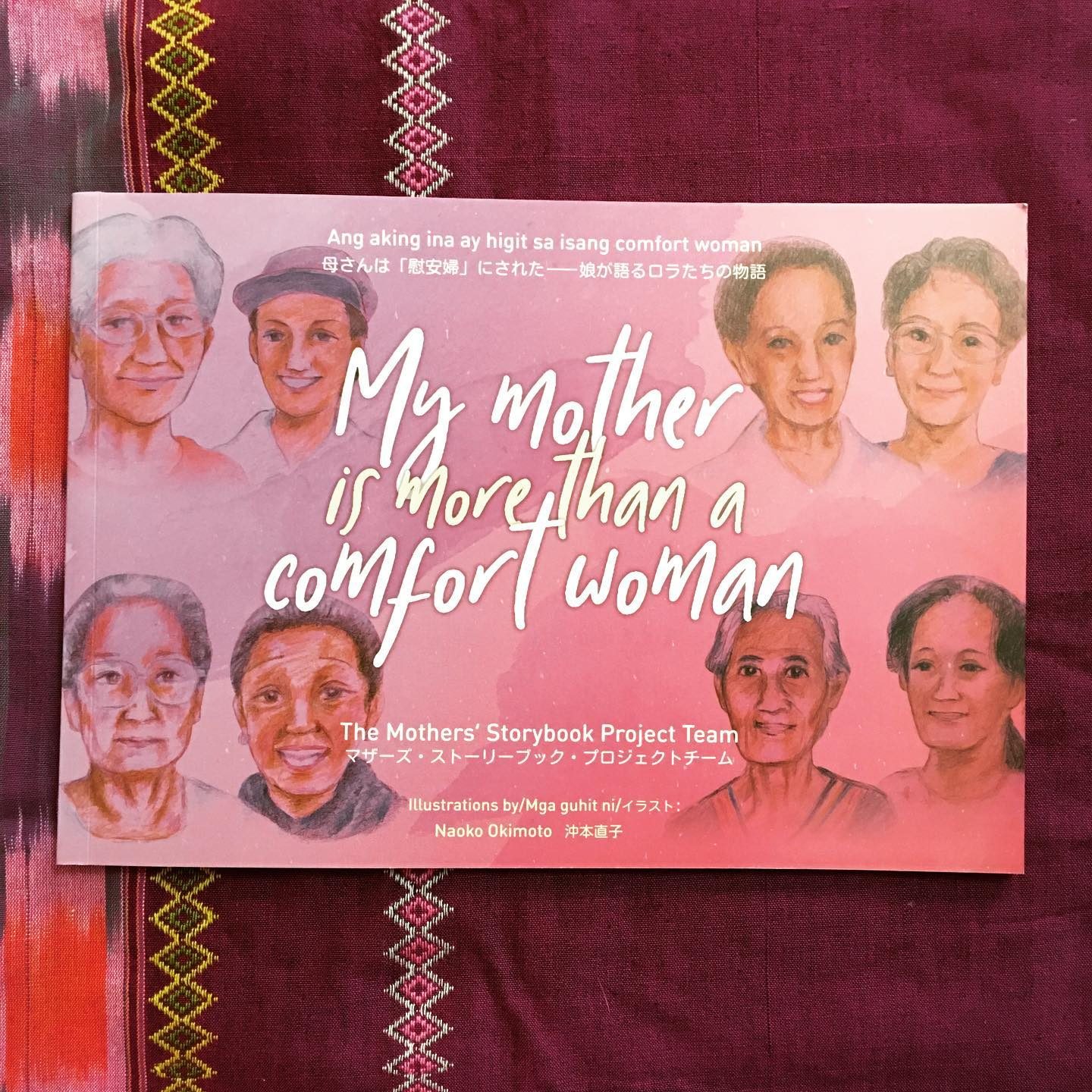 The trauma of war leaves scars that burn long after the conflict has receded and everyone else has forgotten.

Moreover, the government’s invalidation of wartime narratives —  of atrocity, of injustice — is enough to reopen old wounds.

But every now and then, an instance of solidarity comes to soothe and salve the pain.

A new book serves as a literal example of art that comforts the disturbed and disturbs the comfortable.

My Mother is More Than a Comfort Woman is a 63-page storybook complete with illustrations that features four short narratives on Filipino “comfort women” survivors known as “Lolas.”

Comfort women were the victims of sexual and gender-based violence during World War II by Japanese military forces.

“We hope this book can honor the Lolas, or Filipino ‘comfort women’ survivors, as marvelous women who have continued fighting for justice and lived through the years despite all the difficulties. We hope this book will help to restore their dignity as human beings,” wrote The Women’s Storybook Project Team, which produced the book with Lila Pilipinas (Liga ng mga Lolang Pilipina) and published it at Gantala Press.

The book is presented in three languages (Filipino, English, Japanese), written from the perspectives of the Lolas’ daughters and one granddaughter.

Each story is short, spanning only 10 to 12 pages, including the title and illustrations.

Beyond documenting the harrowing experiences of comfort women, the book seeks to explore their rich life stories “as women, mothers, and human beings,” as recalled by their descendants.

Copies are available for purchase at P350 each via gantalapressorders@gmail.com. A portion of the proceeds will support Lila Pilipinas.

Making a book, unmaking the damage

The book took two years in total to produce, the authors said in an online interview.

Planning began in 2019, with interviews conducted in September and the version submitted to Ateneo de Manila University being produced in November the same year. The original version was completed within a year, upon which it was translated into Japanese and then further edited and designed up until March 1, 2021.

The all-woman Mothers’ Storybook Project Team consists of a Cambodian and two Japanese, who studied and acquired dual Masters’ Degrees from the University for Peace in Costa Rica and Ateneo de Manila University in the Philippines. They utilized their different perspectives from each of their respective majors in gender, peace education, and human rights for the storybook.

The said book was originally created for a capstone group project of the Asian Peacebuilders Scholarship (APS) Programme in 2019, in partnership with Lila Pilipinas.

“The three team members started planning the project as part of our scholarship programme. We were interested in the ‘comfort women’ issue and asked Lila Pilipinas to be the partner organization for our project,” the authors said.

From there, Lila Pilipinas introduced the team to the four interviewees and interpreters, even assigning their staff member to help the project. Many others contributed to the book’s creation through editing, advising, and designing.

The team’s major motivations for the project were the need to find an alternative means of conveying the legacy of the Lolas, as well as the lack of books and other media that focused on the life stories of the Lolas outside war.

“Since many Lolas spoke up in the early 1990s, they have continued fighting for justice, sharing their wartime experiences, and protesting against wars in order to avoid creating another generation of ‘comfort women’ in the future. However, it is getting more and more difficult to hear their life stories from the Lolas themselves since most of them are already in their nineties and many Lolas have passed away,” the authors said.

“Younger generations are responsible for carrying on the legacies of the Lolas. So, we wanted to make something not directly depending on the Lolas themselves, but younger generations can act on it…That’s why we decided to interview family members of the Lolas, to find out their perspectives on their mothers or grandmother, to learn how their daily lives were with their children.”

The idea of creating a storybook was initially proposed by Dr. Ma. Lourdes Veneracion-Rallonza, the professor in charge of the team’s project design and implementation courses at Ateneo de Manila University. She advised them that leaving something tangible is “more useful than just a research paper.”

The decision to make the book trilingual lies in the circumstances with English being the common language of the team members on top of being an accessible language for readers worldwide, Filipino being the language of the interviewees, and Japanese to fuel discourse on an otherwise topic of taboo.

“The stories of Filipino ‘comfort women’ survivors have not been widely recognized in Japan, and many people think that ‘comfort women’ issue is a political or diplomatic matter between Korea and Japan. Therefore, it is also significant to include Japanese text to raise awareness of Japanese young people about the Filipino survivors,” the authors said.

“The book is a revisiting of our past as Filipino women who were subjected to the horrors of colonial conquest but whose specific sufferings were never and still has not been addressed by both Japan as the invading power and our own government which has been trying to stifle our right to remember history when it put down two comfort women statues on pressures of the Japanese government,” the group said.

It pointed out that justice remains elusive and has to be delinked from the issue of Japanese official development assistance, “the primary reason why past and current Philippine governments have refused to stand up for Filipino ‘comfort women.’”

The message of the Lolas is clear: there should never be another generation of comfort women. – Rappler.com