“Sinulog” comes from the Cebuano word “sulog” describing the back-and-forth movement of water currents which the Sinulog dance mimics. During the festival’s street dance parade, participants in colorful “moro moro” costumes dance the Sinulog, consisting of two forward steps and one backward step, to the beat of drums. Visitors are free to join the dance!

Cebu City’s festival celebrates the conversion of ancient Cebuanos to Catholicism and their new faith’s harmonious blend with some of their original pagan practices.

This is why a major event during the festival is a re-enactment of Magellan baptising the rajah and his wife and bequeathing the statue to Hara Amihan who, thereafter, was called Queen Juana.

Aside from the re-enactment, highlights of the festival include a river parade, a Sinulog Grand Parade with floats, higantes and costumed dancers, a spectacular fireworks display, the crowning of Miss Cebu and a variety of competitions in sports, film and photography.

For more information on the Sinulog Festival 2013, visit their Facebook page.

“Ati-Atihan” means “to be like Ati,” Ati being the local name of the aboriginal highland tribe who continue to live in Panay, the island of which Aklan is a province. The Atis (or Aetas) have dark skin, a trait which Ati-Atihan dancers emulate by covering their skin with soot and dressing up in the tribe’s traditional costume.

Ati-Atihan is said to be the “mother of Philippine festivals,” inspiring the Sinulog and Dinagyang festivals.

Like the Sinulog Festival, Ati-Atihan began as a celebration of pre-colonial history and later on evolved to a religious commemoration after the Spaniards converted natives to Catholicism.

In the 13th century, when only the Atis inhabited Aklan, boatloads of people from Borneo landed in its shores after fleeing from their homeland. The Atis, hostile to the foreigners or Maraynons, engaged them in bloody battles until the Maraynons initiated a peace talk with the aboriginal tribe.

The momentous event culminated with a feast during which the Maraynons covered their faces with soot to signify their friendship with the Atis. This was the first Ati-Atihan.

During the Spanish colonial period, under the initiative of a Spanish encomiendero, the festival was held in honor of the Holy Child Jesus or the Santo Niño.

The Santo Niño has since become the patron of Aklan with his feast celebrated during Ati-Atihan. A major festival event is the religious procession and street dance in which devotees carry images of the Santo Niño while shouting, “Hala Bira! Viva Señor Santo Niño!”

Other activities include a parade of floats, a bazaar, mass celebrations for the Santo Niño, and street dances of Ati-Atihan tribes accompanied by lively drum beats.

For more information on the Ati-Atihan Festival 2013, visit their official website. 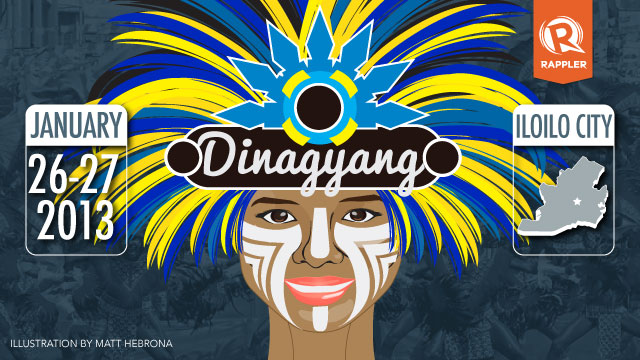 “Dinagyang” is an Ilonggo word for revelry or merrymaking. The festival is Iloilo’s version of the Ati-Atihan Festival. Iloilo and Aklan both belong to the island of Panay which explains why their festivals celebrate almost the same historical events. Three major events complete the festival: the Ati-Atihan street dancing contest, the Kasadyahan street dancing contest, and the crowning of Miss Dinagyang.

In 1967, a replica of the Santo Niño statue in Cebu was brought to Iloilo as a gift to the Parish of San Jose in Iloilo City. Devotees welcomed the image with a parade through the major streets of the city. This first parade, then confined to the parish, evolved to become the Dinagyang Festival. The task of organizing it now belongs to the city instead of to the parish.

The Kasadyahan street dance parade is Dinagyang’s unique feature, celebrated on the Saturday before the Ati-Ati street dancing contest. It is the Ilonggos’ way of thanking God for the bountiful harvest, with performances by tribes from all over Panay who try to best each other in costume, choreography and energy.

For more information on the Dinagyang Festival 2013, visit their official website.

Wherever you may be right now, we at Rappler celebrate the festivals with you. Viva Pit Senyor! - Rappler.com

(Are YOU at Sinulog or the Ati-Atihan festival? Tweet us your photos! Tag @rapplerdotcom and use the hashtag #PHTravel.)