Aug 30, 2015 10:50 AM PHT
Facebook Twitter Copy URL
Copied
One Two-Pronged reader's mom is deep in debt – and she's depending on her children to provide the funds. What should she do? I am in deep financial stress and would like to ask for advice. I am 23, employed, married, and have a 1-year-old kid, but still living with my parents.

The problem isn’t about my finances, but my mom’s. Two years ago, we discovered my mom was deep in debt from multiple lenders, probably amounting to close to a million pesos now, if you include the interest. We don’t even know what she used the money for.

Honestly, I don’t know how we will ever deal with this.

Before getting pregnant, I promised I would help her. I’m trying to be a good daughter but now that I have a kid and starting my own family, it’s difficult to continue paying for her debts while attending to my kid’s needs and helping my younger sister with her college tuition.

My mom doesn’t seem to mind my situation. She relies on me and my elder sister to give her at least a thousand pesos every payday so she can repay her debts. Some of the people she owes even come to me and my sister to ask if we can pay my mom’s debt. Although my dad is still working, he is already 60 and about to retire. I’m afraid there’s no one else to carry this financial burden but my sisters and me.

Please enlighten me on how we can tackle this extremely challenging task of paying off my mom’s debts.

Thank you in advance for your advice.

As Two Pronged is primarily about relationships, let’s look at the people involved in your case. Firstly, there is your mom.  She has racked up all these debts but does not seem to think she is accountable either for the money or for the consequences to the family of her debts. She just expects others to sort out her problems. Next is your father. He is 60 and about to retire. The way you describe him implies that he has no intention of changing his plans and no sense of responsibility whatsoever for his own wife’s financial mess. Then there are you and your sister, saddled with the burden of repaying the money without having enjoyed any of its benefits.

Western psychology and Confucian philosophy appear to diverge in their approach to this problem.

In the West, as children make the transition from teenagers to adults, parents are expected to set the right example to guide their children along this path and to help them as and when they stray from the straight and narrow, as is often the case as they test the boundaries of their newfound freedom, typically with drink, drugs, sex etc. Where however it is the parents who act irresponsibly (other than because of age or illness) and the children who are expected to pick up the pieces, this is labeled parentification in the West and generally considered a negative role reversal.

At this stage in your life, when your parents are middle-aged and you are just starting out in the adult world – making a career and raising a family – it is totally inappropriate that your elders expect you to be accountable for the consequences of their irresponsibilities. They have had 50-60 years to learn to be adults and if they choose at this late hour to revert to being teenagers they should live with the inevitable heartache that will follow. This is your father’s problem, not yours, and if he chooses to disavow or simply ignore his own wife’s debts, then that is a problem for her creditors, not her children.

Conversely Asian (and other) adherents of filial piety will argue that this is a family issue, that children owe an irrevocable debt of gratitude to their parents, if not the extended family, for the sacrifices that their elders have made for them, and therefore the debts of the mother are the debts of the children. This is the lodestar for many OFWs who toil away, far from home, honoring their responsibilities by putting siblings through school, buying apartments for their parents, dispatching a steady stream of Balikbayan boxes etc. It is a classic tenet of Confucian philosophy.

However, slavish adherence to ancient wisdom is a dubious path to follow in modern times and some discernment is surely required to separate the truly eternal verities from the passing fads – and everything else in between. Both East and West have their fair share of ‘values’ that are past their sell-by date – women have ceased to be mere chattel, the droit de seigneur has had its day etc etc (though of course it must be acknowledged that there are still places in the world that this progress has yet to reach).

However, returning to the present day Philippines, does this truly mean that all children have to shoulder their parents’ debts, however they may have been incurred?  How many people really feel this way, except for those who seek to reap the benefits of it?

And anyway, respect for one’s parents must have its limits. It makes no sense to have respect for example for a murderer or a rapist, so where does that leave you, Anna, with your father’s willful refusal to acknowledge his wife’s debts and your mother’s unrepentant irresponsibility?

I would suggest that you recognize that your parents are adults responsible and accountable for their actions and that if they fail to pay up, that is their creditors’ problem, not yours and not your sister’s. 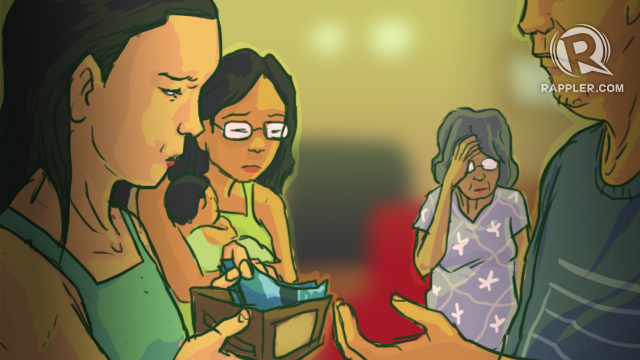 Thank you very much for your letter. On the face of it, your problem seems relatively simple. In fact, there is an old saying in Filipino, “Magpasalamat ka kung pera lang ang problema mo; ang pera makikita” which means “Thank your lucky stars if money is your only problem. Money can always be earned.”

But that is not really true, is it, Anna? You say you are “in deep financial stress” because you (and your sister) have been set up to pay off your mother’s debt. I wholeheartedly agree that having to repay a debt that you didn’t incur is super stressful, especially if you had no say in the matter.

This is not merely a matter of principle (never owe what you can’t pay back/afford). It is also a matter of pragmatics: never do what will lead to repercussions that will make you sick with worry. It is the practical part of the problem that has now weighed you down.

For years you have accepted your mother’s flightiness, and it was relatively easy to do so, perhaps because it did not affect you directly. When you started to earn your own money was when it started to affect you – your salary was not only for you, but for your things your parents should have been responsible for but weren’t – your sister’s education, for example. Your mother’s debts are not your responsibility and yet, because of guilt, emotional blackmail, or other machinations, your mother made you feel they are.

You may have felt it was unfair even then, but then it was bearable because being single, paying giving your mother 1k every payday deprived no one else but yourself.

But you now have a husband and a child and whatever you give to pay off your mother’s debt is money you do not have for your own family.

Your mother’s debt may initially have meant nothing more than some unpleasantness, but now it is getting in the way of your providing your family the kind of life you feel they deserve.

There is no light at the end of the tunnel in your case. Some of the reasons for this include no repentance or firm resolve not to do this again on the part of your mom, and no transparency regarding how much she truly owes. To add insult to injury, you do not know what she used the money for.

It is one thing to pay for a life-saving operation, another to pay for plastic surgery.

If your problem were only financial, you could speak to your mother and tell her how, since your life has changed, you have to take care of your own needs (including that of your husband and child) first. You could also suggest that she come clean with your father but just in case she has then that means both your parents see nothing wrong with what they are doing.

Do not try to convince them otherwise as that will be an exercise in futility. Just tell them you will no longer do what you used to because your own needs have changed. If they understand, terrific!  If they don’t, then like a boil that has to be lanced, you will at least air out the ill will that has been festering inside you.