Nov 15, 2015 11:38 AM PHT
Facebook Twitter Copy URL
Copied
Everything's great – except he hates that she supports her brother financially, saying that it's 'disgusting that Asian children are expected to spend for their families...' I’m 25, financially independent, and have a stable job overseas. I have a long-term Caucasian boyfriend who I met in my host country. We have been living together in an upscale residence which is a benefit I get from my job, and we always split all living and leisure (holidays, dine-outs, etc.) expenses equally regardless if the expense was for a special occasion such as birthdays, Valentine’s or whatnot.

Despite the cultural difference, my boyfriend and I have the same opinions and ideas about most things, which I believe contributes to the good dynamics of our relationship. He also appreciates the fact that I’m not high-maintenance, and that I am always more than willing to split all of our expenses.

As I mentioned, I’m financially independent and I am equipped with the credentials and skills to have a good and stable job anywhere I go. However, there is one cultural matter that keeps on causing disagreements between us – and that is me extending financial help to my younger brother who is still in university.

Our long-term goal is to immigrate to his home country in a couple of years. As we prefer to plan ahead, we have discovered that our biggest challenge in achieving this goal is the great financial requirement set by his country’s government. Regardless if we get married prior to immigrating, I would still need to have a lot of money and so would he.

He really wants us to settle in his country because he thinks that would be best for our future children, and I don’t disagree with that. However, the problem now is he has been pressuring me to save money too much to the point that he keeps on checking up on my spending just to make sure that I’m putting my money into good use and not being “just thrown away to family”.

What really upset me was when in a discussion, he ran a rough computation of how much I “have thrown away” for the past two  years I have been sending my younger brother to university.

My parents aren’t capable and responsible enough to support my brother. I keep on explaining this so he would understand that I couldn’t just leave my brother behind but it’s hard for him to understand this because of cultural differences and his upbringing.

He always says it’s disgusting that Asian children are expected to spend for their families when parents are the ones who are supposed to work hard for their children. I understand where he’s coming from but then again, I have to support my brother. He isn’t a heartless person, his culture is just different.

Our relationship is smooth except for this matter. I want to fix it because I want him to gain a working understanding and not have negative feelings towards my family. I don’t expect him to help me or my family financially, because I know I can do that independently. And my financial support will be ending in a couple years’ time when my brother graduates.

However, I want to have a better approach on letting him gradually understand and accept this circumstance because at the moment, what I’m doing is that I try to divert the topic to something else when I know the subject of money is going to be brought up. I don’t want any arguments.

What also upsets me is that he checks up on my spending habits but I never questioned his expensive habits such as online betting and online game shopping because I know I don’t have the right to do that, and it’s his money at the end of the day. But I am not harping on his habits. I just really want him to understand and accept my circumstance, but how?

Your account makes it clear that you are happy overall with your relationship with your boyfriend (let’s call him James) but the problem lies with your differing attitudes to supporting your respective families financially.

This is in fact a common issue for Filipinos in relationships with foreigners and clashes frequently occur because of often radically opposite views on such matters as 1) adult children living with their parents, 2) siblings supporting their non-working adult siblings, 3) sole, often OFW, breadwinners supporting even their extended families etc.

The philosophical divides lie in the areas of personal versus family responsibilities. To the extent that one can generalize, and there are very many exceptions, westerners expect that their children will become increasingly independent as they approach adulthood e.g. travel to and from school alone, live away from home while at college, get their own place after college, earn their own money and live within their means. These and all the other intermediate steps are indeed designed precisely to facilitate the desired end result: independence.

All this seems clearly at odds with Filipino culture which fosters close and enduring ties with the extended family, encourages unmarried and even married children to stay at home, supports able-bodied adult children living at home indefinitely without prospect of or interest in employment and often considers it the duty of the successful to support the widest number of family members possible.

Against this background, it is clear that misunderstandings between partners can be rife. However, as in any relationship, communication should provide the oil to ease the friction and clearly in your case you have worked out a modus vivendi which suits you both in general. Yet despite this, you and James seemingly cannot agree on these money issues and your efforts to bridge the divide have so far been unsuccessful.

Let’s look more closely at your relationship. You each pay your own way and divide joint expenses 50/50. However, James lives with you; is this for free or does he pay you rent and 50% of all utilities? Your arrangements to meet the costs of your immigration are another potentially toxic issue. Are you expected to shoulder the entire expense on the grounds that you are the beneficiary of the process or is he a contributor, whether equally or otherwise, as he will be an indirect beneficiary once you are legally entitled to live in his country?

It strikes me that the arrangements you have agreed upon imply that you have accepted his cultural view rather than the opposite, or even a compromise. In fact, your email gives absolutely no indication that James has the slightest positive view of your culture at all. So perhaps the problem is actually more extensive than you suggest.

For all your supposed compatibility, James is clearly convinced that his culture’s approach to your differences should always be adopted. This seems to be because he believes it is inherently superior to yours. After all, the fact that he thinks “it’s disgusting that Asian children are expected to spend for their families” demonstrates at the very least a total unwillingness to understand another culture. And with attitudes like this appeals to common sense and reason will have little or no effect.

Given this state of affairs, you may wish to examine your whole relationship in greater detail. Disagreements which superficially are about the disposition of your incomes but in fact go to the root of your cultural world views need to be resolved before marriage and children. Please write again if you wish to share further information with us. 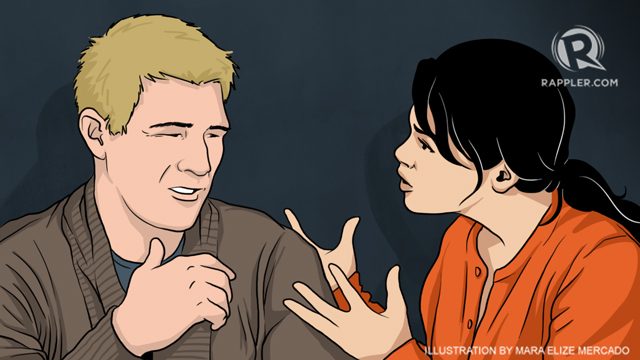 Thank you very much for your letter.  I agree with everything Mr Baer says except for his second, where he says “ Your account makes it clear that you are happy overall with your relationship with your boyfriend (let’s call him James) …”

Actually, your account makes it clear that you are trying to convince yourself that you are happy with Jim, even as your heart tells you otherwise.

Why do I say this?

Because, despite being a competent professional, sufficiently secure in your ability, talent and resources to know you are able to support herself without relying on anyone else, you seem so insecure about who you are emotionally.

Why should you be apologetic about supporting your brother through school? You feel it is the right thing to do, but somehow can’t convince James of that. Instead of respecting you for your commitment to your family, he has the nerve to say “it’s disgusting that Asian children are expected to spend for their families when parents are the ones who are supposed to work hard for their children.” He doesn’t even seem capable of nuance.

In the first place, he is dead wrong. It is not only Asian children who are expected to pitch in if they have the capacity and their parents do not; any family with a heart anywhere in the world would do the same.

Secondly, you seem to have taken on his extremely racist belief that his culture is superior to yours. If you were as arrogant as he, you could turn the tables on him and respond “It is disgusting that Caucasian children are not expected to help other family members in need.”

You say James isn’t a heartless person. I believe you, but being heartless or full of heart is not the issue here.

The issue is whether your marriage will be one between equals or not. So far James feels superior, having the nerve to not merely suggest but insist on what you spend your money on; so far, you have behaved as his inferior, accepting his master-slave paradigm of a relationship, merely asking us to help you “have a better approach on letting him gradually understand and accept this circumstance.”

Gradual schmadual. If he doesn’t understand things by now, he never will.  If he fears losing you, perhaps he might pretend he understands, but a man this sure that his culture is right and yours inherently faulty will find it practically impossible to do so.

UP Diliman sociology professor Sarah Raymundo says it more succinctly: “The mentality that we inherited from our colonizers has led many of us to believe that indigenous knowledge and ways of living are obstacles to progress. The imperialist West’s ideology of development conceives of a single path to progress, and that this is the only valid objective.”

Replace the word “indigenous” with local or Filipino ways of living and you have your situation in one, Ella.

Ella, are you not a full partner in this relationship? Or are you like many of us women –sure of our work, but so insecure in our relationships?  Just because a man doesn’t understand or accept us doesn’t necessarily mean it’s our fault.

You are not some mendicant, asking your master to please wait because supporting your brother will only last a few years longer. Please stop behaving as one.

I promise you will feel so much freer once you do.