Oct 31, 2016 7:09 PM PHT
Facebook Twitter Copy URL
Copied
A woman is close to a guy who offered to be her manager. Problem is, she's not seeing any income from the jobs she's getting because of him. I’d like to ask for your expert advice.  I am working as a freelance model here in this country. I started getting my modeling gigs in January this year.

Last February, I met a guy who got me for a series of photo shoots and casting.  At first, he would contact me once a month for a shoot, then he would ask me to come in twice a week. Then he told me a model agency wanted me to be in their roster of models who do shoots exclusively for them. He told me not to worry, and he would take care of me if I agreed. He also told me, that he knew everyone in this agency – from the owners to the staff – and they would treat me right.

In fact, he said, to make sure the agency would be fair to me, he would even be my manager, collecting fees and taking care of the business side of things. I agreed.

He now asks me to come in for shoots twice a week and I do.

Also, for the past couple of months, we have been going out, to parties and clubs, and become really good friends.

The problem is, I haven’t been paid for the shoots I did for him since March.  Because we’ve started to form a bond with each other – maybe even more since he became my manager – I do not know how to approach him and ask him to pay me.

I really like him and don’t want to jeopardize our friendship because of money. But I also know I need to get paid.

Once, when I asked him when I would be paid, he said: “Don’t ask me. Ask the agency. They’re the ones who are supposed to pay you.”

I don’t know how to bring this up without jeopardizing our friendship.  I have a feeling he is trying to stall to see how far he could go without paying me. Could you please help me on how to go about this?  Thank you.

Like countless others before you, you have mixed business with pleasure and now are reaping a bitter harvest. Of course, it isn’t an inevitable road to perdition.  Many comedians, actors, sportsmen and the like have successfully employed their spouses, relatives or friends as managers, usually without much media mention. Others however have suffered huge losses as a result of fraud by their managers and these unhappy outcomes have naturally hit the headlines.

It is particularly difficult for those just starting in their chosen field of endeavor. The temptation to accept help from anyone offering it can be overwhelming and it is totally understandable how you came to find yourself in this awkward situation. Fortunately it is early in your career and the sums involved, while significant to you, are still manageable.

You need to decide where your priorities lie regarding the money owed and your relationship with your ‘manager’ (let’s call him Pete). These two matters have been and may remain intertwined.

The key is probably your relationship with Pete. How do you think this will develop? Could it become something sufficiently valuable to you that could persuade you to forego the money due to you rather than put it at risk? Or do you think that to maintain his credibility, professional and/or personal, Pete needs to sort out these arrears in order to have a chance of staying in your life? These and other variations require your consideration.

And then there is the future, if indeed you and Pete have a future. Can he be your (boy)friend and manager? That depends in part on how the saga of your arrears plays out. I would suggest however that the qualifications for a candidate as a potential business manager are rather different than those required of a boyfriend. While there may be many who could fulfill either role, there will be far fewer who can fulfill both. So play safe, split the jobs and life may just be that bit simpler for everyone. 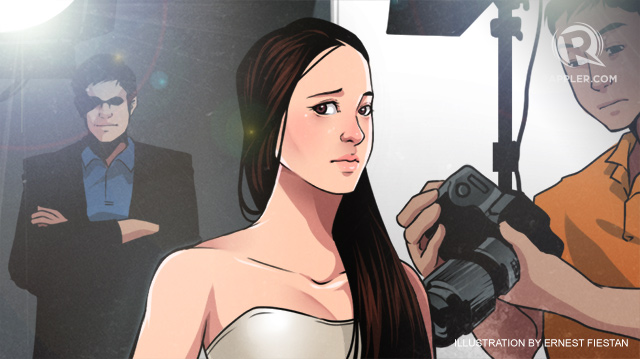 Thank you very much for your letter. I agree 100% with Mr Baer’s analysis: “you have mixed business with pleasure and now are reaping a bitter harvest.”  I also agree with his reassurance that “Of course, it isn’t an inevitable road to perdition.”

However, I am uncomfortable with his suggestion that you “play safe, split the jobs and life may just be that bit simpler for everyone.”

His response: “Don’t ask me. Ask the agency. They’re the ones who are supposed to pay you,” is completely unacceptable and, if the lines were still clear at this point, you should and could have fired him on the spot.

Your relationship had very clear boundaries at the start: “he said…he would even be my manager, collecting fees and taking care of the business side of things. I agreed.”

I do not know when the lines started to blur, but blur they did.

In fact, sexy and fun, but only if you were both into playing that sort of game, which works best if you are both equally invested in your relationship.

But the balance in your relationship changed very quickly.

Twice you used the word jeopardize.

“I don’t know how to bring this up without jeopardizing our friendship”; and “I really like him and don’t want to jeopardize our friendship because of money.”

Hells bells, Candy. He has not just jeopardized your relationships; he has ruined them both.

Pete is the man who volunteered to “collect(ing your) fees and tak(ing) care of the business side of things.”  Yet, when you asked him when he will in effect do as he promised (by passing on some of those fees he collected to you, the talent),  he answers in a way that ensures you will be too frightened to ask him again “Ask the agency. They’re the ones who are supposed to pay you.”

He has failed to be a competent manager. He adds to your worries rather than lessens them, which is the major reason managers are hired.

He has also failed you even more as a friend.

While I never thought I would ever say this, I think Mr Baer’s suggestions are way too kind. I would change: “split the jobs” (of friend and manager) and add, give neither of them to Pete.

That way, you will not only be playing it safe, but playing it healthy, honestly, and positively.