[Two Pronged] Is my boyfriend depressed?

Jan 1, 2017 1:12 PM PHT
Facebook Twitter Copy URL
Copied
Nora's boyfriend doesn't want to socialize, is always tired, feeling stressed, and is not that interested in sex anymore – is he depressed? 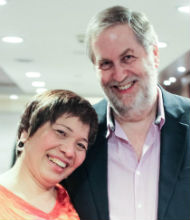 My name is Sarah. I am a 27-year-old nurse living here in London with my boyfriend of nearly two years.

Recently, I am baffled as to why my boyfriend suddenly became increasingly cold to me. It started when I went to a department Christmas party without him. I kept asking him to come with me (we work at the same hospital) but he didn’t want to and I know that parties are not his cup of tea. Since then he’s been telling me he feels lonely, has a low mood, and is sad for no apparent reason. Last Christmas Eve, we went to a friend’s party. He wanted to leave early but insisted I stay, which I did. Then when I got home, he wouldn’t speak to me. He said he didn’t want to keep me from having fun but he felt so lonely at home.

I don’t know, but I feel like he’s very conflicted with himself. I am encouraging him to try new things and be flexible since I am more sociable than he is but he just cannot do it. I feel helpless. I love him and he says he loves me but I am just so confused with his actions and what he’s telling me. I have not changed since we met and we knew from the get-go that we are two very different people. We were always so happy, but since November he’s been telling me he’s feeling low. When I asked him about it he suddenly said that he is kind of jealous that I am able to enjoy myself but he feels miserable and generally unhappy. I always try to include him in my interests: travel, socializing, hobbies, but he almost always turns down my invitations. It’s as if he doesn’t know what he wants in life. He even called off our plans of getting married next year. I confronted him and asked he wants to break up and he said he doesn’t and that he loves me.

What do I do? Is it possible he is becoming depressed or do hormones play a part in this as well? He’s not that into sex anymore and he says he’s always tired or feeling stressed. Please Doc, I am hoping for your quick response. This is my 3rd time writing to you, my first two queries have been published through your local newspaper articles.

There seem to be several possible explanations for your boyfriend’s behavior, of which the two most likely are that he has met someone else or alternatively that he is suffering from depression.

It quite often happens that when a man already in a relationship meets another woman, he is reluctant to admit this and instead seeks to deflect the attention to “self doubts” which he falsely claims he is suffering. In these circumstances he is leading up to such statements as “it’s not you, it’s me” to conceal what is plainly infidelity and thus avoid recriminations.

Alternatively, he is suffering from depression. Working overseas far from family and friends can be quite taxing, even if one is in a job one enjoys. Life outside work ought to be an opportunity to relax and have fun but in an alien culture with different customs, food, and especially weather (UK winters – cold, damp, and dark – are not exactly jolly times) it is easy to feel estranged from anything familiar or comforting.

However, it is important to note that his mood has only recently changed and so he may well revert to his old self. If he doesn’t, it would then be advisable to seek help and as a nurse you are ideally placed to find him a psychologist/psychiatrist or clinic. I am sure that Dr Holmes will have more to say, particularly on the subject of depression. Thank you very much for your letter.  While I have no right to diagnose your boyfriend (let’s call him Alvin), I cannot help feeling that he may be clinically depressed.

Clinical depression is a mental disorder that does not necessarily have to have a biological basis to it, even if some of its symptoms are physical; eg, loss of appetite (or its opposite), weight gain or weight loss, too much sleep or too little. Other symptoms are more psychological: guilt, blame, unrelenting sadness. Depression is considered clinical only if it lasts for at least two weeks and if, among its many other symptoms, included is one of these two: anhedonia (no pleasure in anything that used to give one pleasure) or loss of hope. So far, there is not enough research to confirm whether hormones play a huge part in clinical depression.

If Alvin is like most clinically depressed people, he will need your love desperately – especially during these trying times – and yet, because he feels unworthy of it, he may push you away. Sometimes those clinically depressed succeed in pushing away the ones who love them most but it is a pyrrhic victory because while they feel vindicated in thinking no one loves them yet, well, this confirms that they are so awful they are not worthy of being loved.

Finally, if you truly love Alvin – and you seem to – perhaps it would be kinder if you just let him know you are on his side and he doesn’t have to do anything like trying new things or being flexible to keep you loving him.

People who do not understand how truly soul destroying being depressed can be cannot understand that pep talks do not only not make them people feel better, but can actually make them feel worse.  Should you want to know more about depression, you can read about it – hopefully on credible sites. You can also write us again on Two Pronged as we would be very happy to help you further.  Happy holidays, dearest Nora, and may you and Alvin get through this with clearer minds and even stronger hearts.