Aug 10, 2014 6:49 PM PHT
Anne De Jesus Portugal
Facebook Twitter Copy URL
Copied
'But the world moved on, even if I felt that mine stopped for a while,' writes Anne Portugal. 'Sooner than I was ready, I had to force myself to move.'

She was my Lola. I called her Puput. I seldom talk about her and try not to let her linger in my thoughts. A connection of her to pretty much anything (like animal crackers, sugar-free candies or the sight of someone else’s grandma) triggers a painful memory. It hurts too much.

I’ve read about the afterlife and even dwelled on psychic books but nothing really hit me with a clear answer. In the end, I chose to believe in whatever gives me comfort. 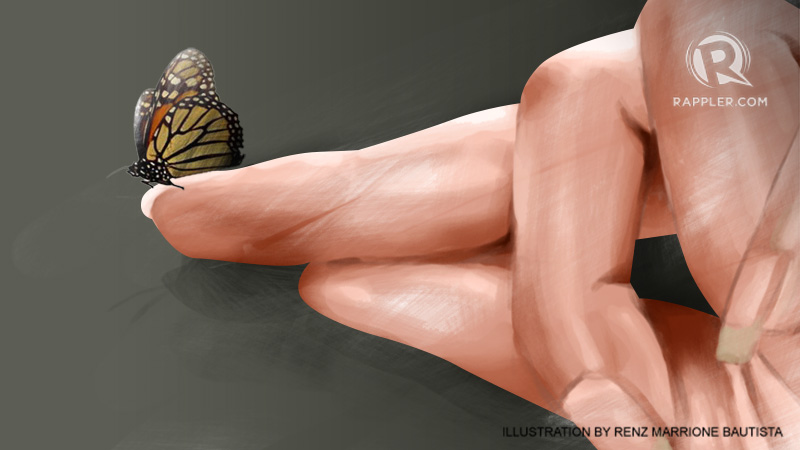 Thousands of miles apart, I saw her on her hospital bed through Skype. Until now I can still hear the beeping sound of her monitor, a flat heart line. She was already lifeless and I could only watch. My cousins were crying on the background and I, with a brave voice, said that it was okay, that she’s okay, there’s no more pain – there was no more pain except for ours.

We knew it was going to happen but the knowledge alone could not prepare us for it—the initial impact, the unstoppable process, the sudden void, the silence.

But the world moved on, even if I felt that mine stopped for a while. Sooner than I was ready, I had to force myself to move.

The wound in my heart is permanent. There can be no absolute healing, only adapting. I’ve learned to be functional, efficient and present in my days despite a constant ache in my heart. This is how we start to live again.

We have to think of the people who love us, the ones who are hurting every time they see us wasting away. They also deserve the best of what we have to give, which would be a lot if we just consider (actually) being alive again. (READ: Mitch Albom: Thoughts on death, making every minute count)

My husband and I were having dinner one night. I remember this tiny flying insect that landed on my plate. My husband whacked it dead. A few seconds later, the same-looking insect appeared again on my plate. Of course, he squashed it. I looked at him and said curtly, “You know, you’ve been killing my grandma.”

He stared at me, obviously puzzled, and all he could say was, “Oh, I’m sorry.” I laughed so hard, I couldn’t remember if I was upset or sad or just plain being weird –but I knew I just wanted to believe that my Lola was there somehow (and I’m lucky to have a husband who lets me be).

People say that the souls of our loved ones often take the form of butterflies. Here, butterflies are free and beautiful. So maybe sometimes she is there and I could only watch her. But this time, I can watch her fly.

In one of my sweetest dreams, Puput was there. She came up to me with arms wide open. Taking me in, she said, “Miss na miss na miss kita!” (I really miss you, so much.)

As she hugged me, I felt the love, the happiness, the reality of it all – and then my eyes opened.

I’ve developed this strange belief that dreams are portals to other dimensions and even made this theory that this phenomenon only occurs during “unexpected and stolen sleep” – moments when I had no intentions of sleeping but dozed off anyway.

I find every possible excuse to prove to myself that she’s still here when in truth, she is anywhere BUT here. She is simply not part of this world anymore, and I must go on and leave her be.

I’ve learned to let go somehow, for both of us to be free. I’ve learned NOT to dwell on the pain alone. Her adventures will continue in another world, without me. And while she’s at it, I must continue mine in this world. Her time here has passed, and mine hasn’t for a reason.

I really don’t know where she went, and what it’s like wherever she is, but I choose to believe that she’s okay, because after all, that is all I can hold on to.

There will never be a memory of her that will pop up without a sudden stinging in my heart, but I know I will see her again in a world where both of us can exist together.

Anne was a news writer. She now resides in California with her husband and two boys. Her self-published book, Ask Me Love is available at Buqo and Amazon.com. A poem dedicated to her beloved Puput appears there.