[Two Pronged] He just doesn’t listen to me

Jun 28, 2015 11:54 AM PHT
Facebook Twitter Copy URL
Copied
'Most of the time, he won’t respond when I open up. I know he hears, me but listening is a different story,' goes this week's Two-Pronged dilemma I am an avid reader of Two Pronged but it never really occurred to me that one day, I would be asking for your advice as well. But now, I feel like I need it. I need professional advice.

My name is Cory, I am in my early 30s and currently in a relationship with a guy (you can call him Anton) almost as my age as well. We’ve been dating for 3 years now and both have stable jobs.

I love my boyfriend, I have to state that as early as now.

BUT, I have a concern / issue on my boyfriend’s communication skills.

I believe that each and every time my feelings are hurt, I need to tell him. I need to open it to him because this is a relationship for two and not for one.

My approach is always in this format, “I feel bad about what happened last night. I hoped you could have been more careful on your words or actions … “ Afraid of being misunderstood or to offend him, I talk about my feelings first. How I felt and why I was hurt by his actions / words.

Getting really mad, like almost picking a fight, isn’t my thing. I’m usually calm even when mad. Not sure if that’s a disadvantage but to me I find it a positive note.

Most of the time, he won’t respond when I open up. I know he hears, me but listening is a different story.

When I ask for his side, what he usually says is he’s thinking about what to say to me, and days pass by and it’s like he’s forgotten that I’m waiting for his response.

You may ask, what usually hurts me?

It is whenever I feel unappreciated. I’m not saying all that I’m doing for him should be returned.

He’s giving me this kind of signal, you’re-my-girlfriend-and-this-is-what’s-expected-for-you-to-do.

I feel like I’m giving more and I’m beginning to get tired of giving.

I cook for him, I surprise him, I help him with some chores, I create and make time for him.

If I have to cancel previous engagements, not a second word, I’ll do it.

And all I get is his silence or conversations that don’t really connect with the scene.

Boyfriend’s reaction: Wow! .… (after a few minutes) You know what, I saw our neighbor earlier dadadada..

What I felt: Uh-huh. Ok. What part of reaction have I missed out there?

His actions are getting me confused and hurt.

Now, I feel like, hey, me first. I’m trying not to think of him as often as before. I’m no longer excited to talk to him at night and instead keeping myself busy with other things.

When he texts, I reply but that’s it. I got tired of telling him what happened throughout my day because I know for a fact, he will just hear me and not listen.

By the way, it happened a lot of times. He’ll let me talk and then when I ask for his opinion, he’ll suddenly say he needs to go to sleep or he’s tired or he has something to do…But if he’s the one talking, I make sure I listen and even imagine the scenario so I could be more interested. I try to expand by asking questions so our conversations aren’t just conversations, because I seriously want to know what’s happening to him on that day.

I don’t know what’s going on his mind. And I have got tired of asking.

I’m afraid that sooner or later, my love for him will get tired too.

Am I just hungry for attention or there really is a problem that needs to be addressed?

Thank you so much and more power!

Your account of your relationship with Anton is not exactly replete with detail. We learn that you love him (no reasons given) and that he is unresponsive but nothing more. Perhaps the rest is unimportant, or going well, and you want to emphasize that communication is the main issue you want to address.

During the hunter gatherer era, when survival itself was mankind’s daily challenge, communication was not considered a priority. It took several thousand years before women achieved a degree of emancipation and men accepted that discussion of their feelings was not necessarily a dire threat to their manhood.

In the modern era communication is widely considered one of the key elements in a relationship though this is by no means a universally accepted truth (many fundamentalist religions stress the primacy of the husband over the wife, for example, and there is a world of difference between, say, the views in first world cities and rural Africa).

However, your situation is not just a question of whether communication is a ‘good’ thing but also that you and Anton have radically different approaches to managing your relationship. You want to discuss and resolve potential and actual problems while he apparently wants to ignore them.

Problems can be major or minor, tolerable or deal breakers, and couples deal with them in different ways. Issues such as affairs, abuse etc. can be tolerated by some and cause for severing the relationship for others. They can be present from the beginning or appear over time.

Prof. Angela Arriola Yu of the UP Diliman Dept. of Psychology recently drew Two Pronged’s attention to an article which may resonate with you (click here).

This issue is clearly in the process of growing from a minor irritant into a potential deal-breaker but you have the definite advantage of both recognizing it and having time to deal with it before it gets out of control. You therefore need to explain clearly to Anton the consequences of his continuing non-engagement. If he values your relationship together he will listen. If he doesn’t, good riddance! 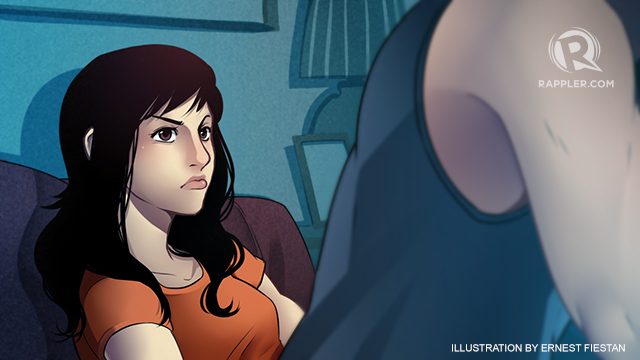 Thank you for your letter.  You asked if you were “just hungry for attention or (is) there really a problem that needs to be addressed?

IMHO, there is a problem and there is only one way you can get it addressed.  And you can only do that if you are ready to leave him if the situation doesn’t change.

I say this because I am sure you have tried everything you can think of to get him to respond to you in a way that makes you feel he’s listening. Yet nothing has worked so far.  Thus, when – and only when – you are ready to walk the next time he makes you feel not listened to, sit him down and have a talk. In other words, this talk will not be like your usual talks.

All it will do is state what you will do the next time you feel not listened to – and that is to leave. One of the basic things you learn in family therapy is that if you want something to change in a system (in your case, the way you communicate with each other), you must change something in that system. Since the only thing you are capable of changing is yourself, then that is what you focus on.

It sounds like this is what you’ve already been trying to do, but the difference now will be that this time you will focus not so much on how you feel, but on what you must do in order to maintain your self-respect. It is your self-respect, your love for yourself, that gets battered and bruised whenever he fails to respond to you when you feel you’ve opened up to him or done something special for him.

If you cannot get him to change when you tell him how you feel, the only dignified response left is to take yourself out of a situation that keeps on making you feel bad about yourself. But remember, have the talk only when you know you are prepared to leave him; otherwise you will just be making empty threats.

Sometimes looking at your own parents’ relationship helps you do what must be done. If theirs was a relationship that was practically non=existent because neither knew what the other felt due to lack of communication, then why be willing to suffer such a relationship?

But, if they had a good relationship, where each felt validated and listened to, well then why on earth should you settle for anything less?

If you need something extra to put titanium in your backbone, just remember what John Dryden said: ”none but the brave deserve the fair,” and surely nothing can be more fair than a relationship where you feel looked after and safe.