The good, the bad, the ugly: How to set boundaries after moving back to your parents’ 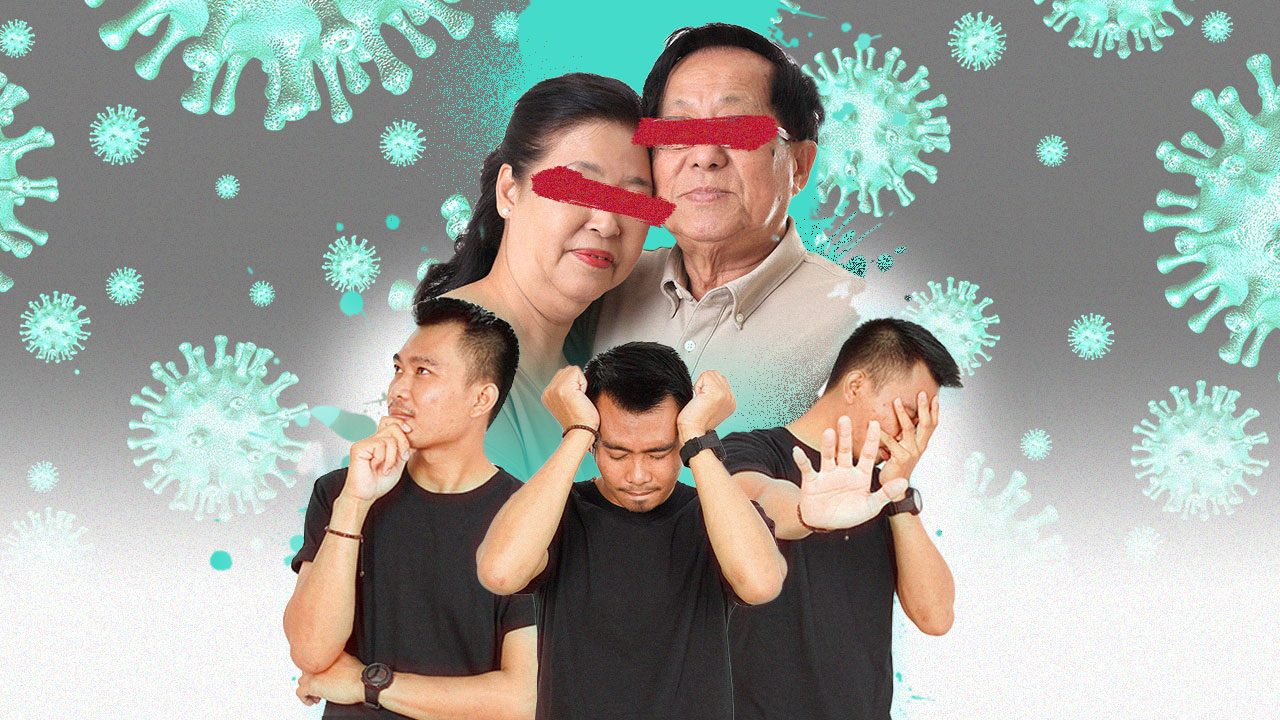 Facebook Twitter Copy URL
Copied
Moving back home takes some getting used to. These young adults share how they manage to peacefully cohabit with their family.

MANILA, Philippines – In 2013, when then 16-year-old Joanne left to study in a university in Metro Manila, she decided to only return to her childhood home in Bicol for the holidays and school breaks.

Her plan? Stay in her dorm throughout her four-year college stay, take summer classes if possible, graduate on time, pass her licensure exams, and find a job as a psychometrician – all while staying in Metro Manila.

There was no family feud, she said. “It’s just that, after growing up sheltered in the province, I was just eager to live independently.”

In December 2019, she was working as a recruitment specialist in a marketing firm and living alone in a studio apartment. Everything was going according to plan – until the COVID-19 pandemic.

By September 2020, Joanne found herself accomplishing all the necessary travel documents so she could go back home to Bicol. After six years of only seeing her family for short vacations breaks, she now braced herself to live with them again for the foreseeable future.

Driven by choice or necessity

“At first, I was honestly dreading it,” Joanne told Rappler. “I haven’t considered my childhood home as my home for a while now, and my bedroom has been transformed into a bodega already. But I knew that it was the most practical decision considering my situation.”

She said that living alone during the months-long lockdown in Metro Manila has taken a toll on her mental health. Pre-pandemic, she had weekend outings and end-of-workday hangouts during weekdays. But she was stripped of that during the quarantine, so she started toying with the idea of having her parents and siblings as her companions.

At that time, their town in Bicol had fewer COVID-19 cases and not-as-strict quarantine rules than where she was currently in – Makati. She added that she no longer needed to stay close to her office since they had moved to a work-from-home set-up and her contract with the apartment was ending. For practical reasons, it was an easy choice to make.

While Joanne had several months to come to terms with her decision, Paolo, a third year student in medical school, was forced to move back home out of necessity.

Paolo’s mother got laid off from her job and the whole family needed to adjust their expenses. Since his university already announced that they would shift to remote classes, he volunteered to go back to their province so they no longer needed to pay for his dorm expenses.

“I’ve been living mostly with my friends and classmates for the past few years, so it felt strange to be back under my parent’s roof,” he said. “I knew that changing my lifestyle to fit theirs would be the biggest adjustment I have to make.”

Both Joanne and Paolo admitted that they were initially worried about possible fights and misunderstandings. Would their parents meddle with what they did during their free days? Would their relatives exasperate them during study or work hours?

The answer? Yes and yes.

More than a year of staying with their families, they’ve had their fair share of scuffles. They’ve had to ask their relatives (“And it’s not every time that we’re calm about it,” Joanne said) to respect their personal space several times, and assure their parents that they actually knew what they were doing.

“But in retrospect, it wasn’t as bad as I initially thought,” Joanne added.

Moving in with family, even temporarily, can be tricky – especially since it affects family dynamics. But others have found it incredibly healing, to the point that they have even surprised themselves.

“I’m confident that I have a better relationship with my parents and siblings now as compared to when I was living away from them,” Joanne said. “Maybe it was because of the pandemic, or because we’re literally seeing each other 24/7, but we’ve been more open with communicating with each other.”

The same goes for Paolo, who thinks that it was a kind of re-learning as to who his parents were. “The last time that we’ve been this close and spent so much time together was when I was still an adolescent. But now that my parents recognize that I’m already a young adult, we’ve had wider and deeper conversations,” he said.

Joanne agreed: “When I was young, it felt like I saw my parents as these huge strict figures that won’t get me. But now with this new adult perspective, I’m starting to see where they are coming from. And in return, more than our relationship just being the parent-to-child, I think we found this understanding wherein they see me as an individual who is capable of smart decisions.”

Gaile, a 25-year-old accountant, said that her parents wholeheartedly welcomed her when she told them that she was moving back home after quitting her job. She had had enough of the toxic work environment and confessed that she was not really happy with her profession anymore.

“At first, I was ashamed and scared to admit it to my parents,” she said. “Society has these abnormal expectations that we should achieve success after graduating or that at this certain age, I should be a fully-fledged responsible adult. But that’s not my case.”

The pressure from work, isolation from friends, and the uncertainties brought on by the pandemic pushed Gaile to be more honest with herself and truly consider what she wanted to do next. “Staying with my parents gave me the cushion to just contemplate what I want to do in my life. I know that not everyone has the luxury to just do a mental health break in the middle of the pandemic and not worry about finances or anything else. But I’m glad that my parents helped me a lot with this one.”

Do’s and don’ts for cohabiting

Moving back home after years of living independently takes some getting used to, on both sides. So here are a few tips on how to make sure that cohabiting won’t be as dreadful as you imagined:

Adjust to the environment. Constantly remind yourself that you’re not the only one experiencing change and that others will also do the necessary adjustments for your given situation.

“My siblings and I moved out several years prior,” Gaile said. “So my parents weren’t really used to having a child around anymore. And that’s what I had to constantly keep in mind during the first weeks that I moved back in, every time they forgot about my existence. There were times they turned off the lights when I was still in the living room, or only cooked for two. But that’s okay. Haha.”

Understand too that not everything will be to your liking, and you have to make do with that.

“When I was living alone, I had free reign [with] what to do with my resting time. But since I’m under my mom’s roof, and her Saturdays are reserved for general cleaning days, I have no choice but to do errands, too. It’s all good, though, because when I tell her that I had a bad work week, she lets me skip some cleaning Saturday sessions,” Joanne shared.

Agree upon rules and expectations. Don’t shy away from talking about practical concerns and addressing trickier issues. May it be as simple as the division of household chores or about the contribution to household expenses, it’s important that the family is open to these conversations.

Discussing matters like these could also lead to family members becoming more honest with each other and learning to respect each other’s emotional boundaries. Parents will know when their advice is welcomed or if their comments are unwarranted, as well as learn to respect their child’s right to make their own decisions. It’s important that they find that balance wherein their support and concern won’t translate into meddling.

“I had to explain to my mom that I was more comfortable with me doing my own laundry because she wanted to do all the household chores herself,” Gaile said. “And from that, I had to convince her that I can do chores, too. Before that, she still thinks I can’t cook or fold my laundry.”

Setting these rules, they said, is a way for the parents to realize that their child is already an adult.

“During the early days of moving back in, my mom had this habit of wanting to clean my room and bring me food. While I appreciate the gesture, especially that it’s something she’s been doing since I was young, I had to make her understand that she had to break out of that pattern. I’m no longer comfortable with her entering my room without knocking, or distracting me during my study hours,” Pablo shared.

“It doesn’t happen often anymore, but there are times where I have to remind her that I’m no longer a teenager that needs coddling, or that I can actually do stuff on my own,” he added.

Joanne also said that by having these clear expectations, it can lessen the chance of possible misunderstandings: “My parents didn’t require me to contribute to the household expenses, but I took the initiative to pitch in. I know that it’s not necessary, but I wanted to at least have this shared sense of responsibility for my part, too. They’re not the type to play the blaming game, but I personally just don’t want to feel like I’m freeloading during my whole stay.”

Have a back-up plan. Be aware that conflicts can still arise. Know how you react to heightened emotional activities and assess if it’s something that will be well-received by your family members. If you’re the type to lash out, find out what you need to do to stay calm.

If the situation gets too toxic for your liking, consider your other options. Is it better if you move out? Is this something that can be fixed by compromise? Don’t forget that you have the option to leave.

Paolo shared that he’s now planning to move out of his parent’s home. “From the moment that I moved back with them, I knew that I still wanted to live on my own. I’ve been saving up for it. And my parents are okay with that.” – Rappler.com