Facebook Twitter Copy URL
Copied
'He said he was going to sleep. Unluckily for him, I saw a picture of him with his friends drinking, and he was beside his ex-girlfriend.'

I‘ve been in a relationship for two years. When the pandemic started, we couldn’t see each other because we went to our own provinces, which were far away from each other. I thought everything was okay, but last week, he lied to me. He said he was going to sleep. Unluckily for him, I saw a picture of him with his friends drinking, and he was beside his ex-girlfriend.

I then asked him if he’d already seen his ex. He denied it at first but when I sent the picture, he admitted that he was with his friends, and said sorry that he didn’t tell me since he was afraid that I might get angry.

Me: Why are you with your ex?
He gave a reasonable explanation.
Me: Don’t lie anymore.
He promised. So we were good.

But this Saturday, it happened again! He told me he was going to sleep, but I again saw a picture of him with his friends. I don’t know why he’s again beside his ex. Why didn’t he tell me? He then said that it was just a picture, that they had all gone swimming and she had happened to sit beside him after she came from the pool.

He hurt me so badly and he doesn’t know if he loves me or not?!!? He thinks he’s not an LDR (long distance relationship) type of guy.

Me: You told me you were sure you could do this. Anyare?
He: I am scared you might get hurt again…. Why don’t we take a break?
I agreed.

I really don’t know what should I do now: Do I need to break up with him? I don’t know if I can stand his lying to me again. Lucky if I catch him, unlucky if I don’t.

Does cheating ‘just happen?’ We ask an expert The consequences of the pandemic have been myriad and have not spared relationships. Some people have found that “absence makes the heart grow stronger,” while others have felt “out of sight, out of mind.” Your relationship seems to fall into both camps, but unfortunately you are in one and your boyfriend is in the other.

Perhaps you can be grateful for one thing – the pandemic seems to have revealed your boyfriend’s true colors. Over the course of your separation, he has lied to you, decided he is not the “LDR type,” realized he does not love you, and only came clean because you pressured him into doing so.

This of course may only be the tip of the iceberg – who knows what else he has been up to – but it is definitely enough to call it a day on your relationship. This is not, after all, someone in whom to invest any more of your time and energy. Console yourself with the knowledge that you have found out sooner rather than later and begin to enjoy the fruits of being free again.

Modern-day cheating: What is a ‘social media affair?’ 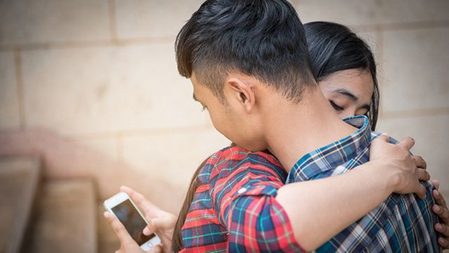 Thank you very much for your letter. My answer to your question “Do I need to break up with him?” is an unequivocal yes!

Yes, for many reasons, but the most obvious is what you yourself wrote right after you asked the above question: “I don’t know if I can stand his lying to me again.” Because he hasn’t said or done anything to reassure you that he’ll stop lying. In fact, he has practically promised you he will lie to you first chance he gets.

The last two sentences in your letter say it all: “Lucky if I catch him, unlucky if I don’t.” Because you definitely will catch him…and who wants to continue in a relationship where you know you will be unlucky, for no other reason than to continue it?

Your use of the word “catch” is another dead giveaway that you should end your relationship. Who wants to be in a relationship where “catching” him doing something he shouldn’t do is inevitable? This person is supposed to be your significant other, not some perjurer who will lie once more.

I think I know the reason it is so difficult to say goodbye, even if everything you write makes it obvious that saying goodbye to him is the most reasonable response to your relationship. It is because, right now and right here, this is the cuffing season. Cuffing season is the period of time when single people begin looking for short-term partnerships to pass the colder months of the year. The term refers to being “handcuffed” to another person, because you want to tie yourself to someone else, at least until it gets warmer.

The Philippines is not exactly Siberia, but it is still nice to have someone during the holidays, even if we cannot literally cuddle with our partners since they are in a different province. In addition, this pandemic has made us feel we have no choices; that if you find someone, no matter how flawed, it’s best to stick with him and decide that siya at siya lang (he is my one true love).