[Two Pronged] Are my ‘sex adventures’ turning into a problem? 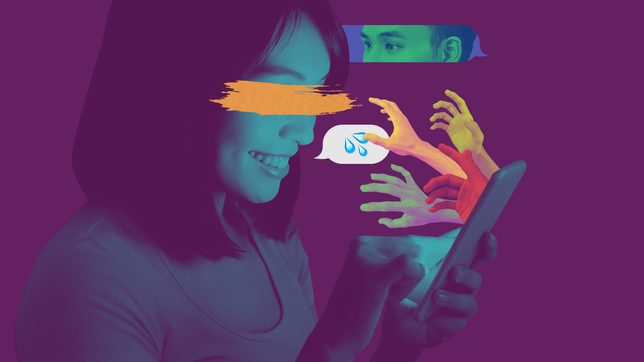 Facebook Twitter Copy URL
Copied
'My friends tell me I have a problem. What do you think?'

Here’s my problem. Dilemma na po ata. My partner and I just broke up because I had an online relationship he found out about. By the time I actually met my online guy, we were already separated. We met only twice. No sex contact at all then no more contact, without any explanation.

I got so hurt, almost went crazy dun na nag start yung sex-venture ko po (when my sex adventures started). Chat chat for a while, then meet up with them. If course, one at time. Starting last year, I have 8 men that I have sex with.

I just want to stop in my mine, especially now because with lockdown things are more strict but once I start chatting with them…it’s like I long to have sex with them again. They are all separated from their wives. 26 is the youngest and 46 the oldest.

There are many of them who want to have sex with me again, but only 3 of them are open minded about my having a relationship.

I am not really that pretty, and I am not that sexy, but once they hook up with me, they don’t like to stop having sex with me. Ganun din po ako (it’s the same with me).

My friends tell me I have a problem. What do you think?

It seems perfectly reasonable that you were upset when your online guy ghosted you, both because you obviously felt that the relationship had a future and because you had in short order gone from two relationships to none. What is possibly less usual is that to overcome your loss you threw yourself into a flurry of online dating and ended up with eight men as sexual partners.

I suppose you are to be admired for your ability to juggle the demands of eight separate partners and to manage the hectic schedule of seeing them all regularly. Some people have administrative assistants to cope with diaries like yours. However, a little self analysis as to why you have in a relatively short period gone from one partner to two partners and now to eight partners is overdue.

Could it be that the shock of being dumped twice in a short space of time has caused you to overcompensate and entertain multiple partners in relationships that are unlikely to go anywhere? Or has said dumping unleashed the real you, freed from the shackles of conventional relationships, marriage, kids etc.? Frankly, you do not give enough information for a more informed view.

Finally, you say that despite not being that pretty or sexy, the men that you have sex with don’t like to stop. To put this in perspective, you might like to glance at a study by Clark and Hatfield which showed that men were more than ready to accept an invitation for sex even from unknown women whereas women were not. While this explains your male partners’ actions, it does not cast more light on yours and I will leave it to Dr Holmes to consider this aspect.

Thank you very much for your letter. In answer to your question: “My friends tell me I have a problem. What do you think?”

Yes, dearest Elisa, I think you do.

One reason I say this is what Mr Baer mentioned in his answer to you: He mentioned the study done by Drs Clark and Hatfield, showing that “men were more than ready to accept an invitation for sex… from unknown women whereas women were not.” In other words, it is not because of some “factor X” in you that made them willing partners; it is simply because you said yes.

Realizing the above might make it easier for you to say no the next time. Most people like sex. Usually, not only for the pleasure and the sexual release, but more for the validation, recognition, and affection (if not love) that it brings. As this study shows, that it is probably not due to your sexual allure that men have sex with you; your not getting any true validation from these encounters might make it less tempting to have them in the future.

A compelling reason, however,  is your own admission that: “I just want to stop… but once I start chatting with them… it’s like I long to have sex with them again.” Some psychologist would call this sexual behavior strongly suggesting sexual addiction.

But please do not worry about such a scary sounding disorder; it is possible you can stop this behavior fairly easily…especially someone like you, dearest Elisa, who started having sex with unknown men you met on the internet only a year ago.

Also, not just a mere study but mega study on cyber sex reported that there is therefore no evidence that those who use it (cybersex) are sexually addicted.

Finally, the most important reason I feel you can control having sex with men you meet on the internet is your openness in considering the fact that, yes, you may actually have a problem.

I sense no anger in you, no accusation that your friends are being judgmental about thinking this of you. Being non defensive about having a sexual problem means you have already taken the first—nay, the second and even the third perhaps—step in solving it, should you sincerely want to, with the help of your friends, Two Pronged (should you wish to write to us again) and/or a higher power.