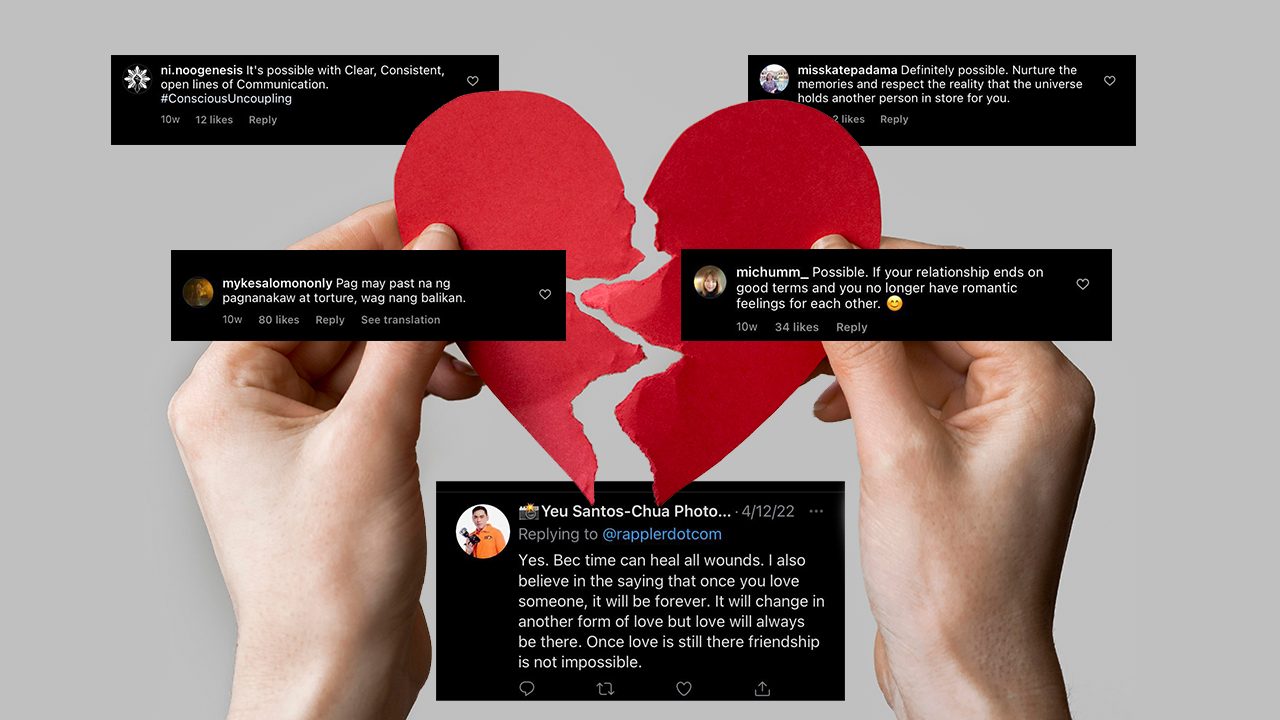 Let’s get this straight: breakups are normal. What’s not normal is having these ex-couples attack their former flames and air their dirty laundry out to the public. In fact, seeing these ex-couples, who once penned the sweetest messages for each other, exchange tirades after their relationship ended often make us wonder – is there even a chance for them to be cordial with each other?

The possibility of maintaining a friendship with your ex has been an ongoing debate – with most assuming that it would only be possible if the couple didn’t genuinely love each other.

But there are actually several valid reasons as to why ex-partners can and should remain friends. For example, exes who happen to be co-workers, or are in the same circle of friends, or need to co-parent their child, think it’s best to be civil towards each other than just affect those around them with their bad blood. And while it might be shocking to many, not all relationships end in a messy breakup, making it easier for all those involved to be amiable towards each other.

Because despite losing the romantic attraction, there’s still so much more in common between people – may it be in interests, hobbies, or their outlook in life, that can actually cause them to remain good friends. But how do they do it? We asked our Rappler readers their secrets.

There’s no history of toxicity

First things first, what was the cause of the breakup? As Rappler readers pointed out, if your ex has a history of cheating, lying, manipulation, abuse, and other toxic behavior, then it’s best that you cut all ties with them. After all, you’re finally in a better situation now that they’re out of your life.

Friendship requires respecting each other, and if they weren’t able to do that both during and after your romantic relationships, then what’s the assurance that they’ll treat you any better in any other kind of relationship?

Aside from the cause of the breakup, it’s also best to examine the motive behind wanting to be friends with your ex.

Are you just holding onto your ex because you’re feeling lonely and just waiting for them to change their mind and rekindle your romance? Or you’re afraid of the potential changes that their absence in your life can bring? Or you just want to keep an eye on their dating life and attempt to influence it?

Needless to say, deciding to stay friends with an ex because you’re either too dependent on them or still aren’t over them romantically is definitely not advised! It might be a hard pill to swallow but your unresolved romantic desires will not be fixed by an offer of a platonic friendship.

Before you agree to be friends with your ex, it’s best to ask yourself: Will I be genuinely happy to see my ex happy – may it be on their own or with a new partner? Will being friends hinder you from moving forward in your life? Will you be able to celebrate their wins without feeling bitter or mourning the loss of your relationship?

If you cannot honestly answer that you would be comfortable hanging out with your ex in both good and bad instances, then maybe it’s not the time for you to be hanging out again just yet.

For Rappler readers who are friends with their exes, most admit that it wasn’t something that happened in a snap.

Like most breakups, it’s best to give all parties involved time to move on. For them, taking time off from each other is helpful in giving them a new perspective on how their relationship went, and how they should go from there.

The parties involved should already be at the point where they both want to reconnect with each other as friends. Just because you want to be friends doesn’t necessarily mean that your ex also wants the same, and you are just going to have to respect that.

They added that it’s also better to not rush things. It might be awkward at first, but you’ll get better at being friends through time.

Transitioning from lovers to friends can be quite tricky; that’s why it’s important that both parties must be on the same page with how they behave towards one another.

It’s best to give each other space because failing to do so will complicate matters. As lovers, you might have been entititled to know everything about each other, but that’s not the case for friends. You’re now allowed to keep more personal details to yourself, and that goes the same for your ex.

Preserving this personal space and boundaries help to not keep the lines blurry.

Now that you’ve decided to be friends, there’s no point bringing up your disagreements as a couple. Whatever has happened in your romantic relationship should remain in the past.

Being angry or resentful won’t help you move forward with your relationship.

Be honest about your feelings

If you decide to pursue a friendship with an ex-lover, it’s important to always prioritize yourself and your well-being.

Healing is not linear and feelings can always reignite – both for you and your ex. When this happens, it’s best to assess yourself and how you feel about this situation. Will this complicate your friendship? Where will these new feelings lead me?

If you think that these changes will affect your stability, then you can start considering if it’s easier to give each other space instead. – Rappler.com