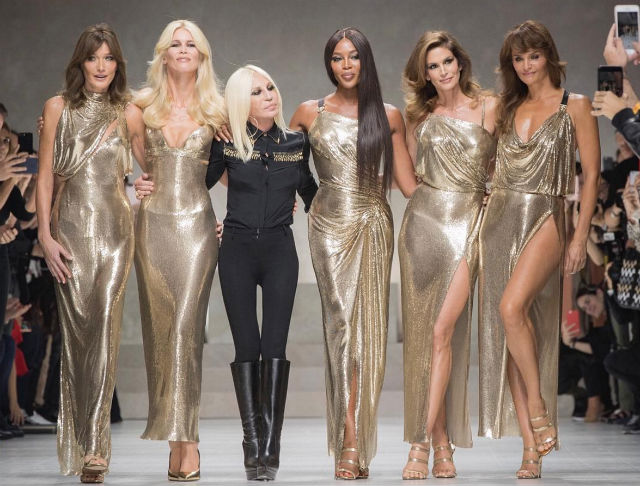 MILAN, Italy – Donatella Versace authored the defining moment of Milan fashion week on Friday, September 22 with a blockbuster show honoring her late brother Gianni which closed with a surprise supermodel reunion that brought the cheering crowd to its feet.

Security guards had to brush back the audience when it rushed the catwalk once a white curtain at the head of the room peeled back at the show’s close to reveal the guests of honour.

Each of the women – all now in their 40s or 50s – had personally worked with Gianni during their years on the runway.

“Gianni this is for you,” a voice declared throughout the show, which featured a greatest hits of the murdered designer’s canon.

It was all done before a starry crowd including Formula 1 champion Lewis Hamilton, Kardashian mom Kris Jenner and Gucci creative mastermind Alessandro Michele. Superstar model sisters Gigi and Bella Hadid were there too – but to show off the collection to the crowd of buyers, fans and bloggers.

On July 15 the two-decade anniversary came and went for the murder of Versace, who was shot dead on the steps of his Miami Beach mansion. The gunman, 27-year-old Andrew Cunanan, took his own life days later after an inexplicable crime spree that left at least 5 dead.

“We pay homage to not only (Gianni’s) artistic genius but to who he was as a man, and above all, as my brother,” Donatella wrote in her notes on the Spring/Summer 2018 collection.

Giorgio Armani’s show earlier in the day aimed for the same determined joy, which flew in the face of a world that seems dogged by disaster at the moment – some natural and some man-made.

The clothes he sent down the runway were bright and modern, full of vivid prints and crisp cuts.

What was not there was outrage over Donald Trump, fear that North Korea’s cold war might get hot and no trace of the carnage left by a string of earthquakes and monster hurricanes.

“It’s not because it’s a sad moment that I have to make women sad on the runway,” the veteran designer told reporters after the show at Teatro Armani.

Art with a “capital A”, Impressionist paintings – but not one in particular -–drove him to create a collection with plenty of flowers, bright silky pinks and lots of sequins.

Providing a bit of star power for the 83-year-old’s show were Monaco’s Princess Charlene and Australian actress Cate Blanchett, who is the face of Armani’s Si perfume.

On the catwalk there were plenty of small jackets, short dresses with sloping hemlines and luminous pleated skirts. The models also showed off vertiginous, see-through high heels.

Gauzy jacket and trouser suits embellished with bright designs as well as silky green or silver skirts were major themes.

They were all part of what the designer’s notes called the “sophisticated, linear elegance of the Armani language.”

As ever, the show concluded with the designer emerging briefly from backstage in his trademark working clothes of long-sleeved top and high-tech sweatpants to briefly accept the audience’s applause.

The show comes just two months after the Armani group announced it would reorganize its brands, concentrating on 3 core labels and trimming its network of boutiques.

The change up was announced in July when Armani confirmed its sales had fallen 5% in the previous year.

Big brands, including Prada, have struggled to find their mojo after revenues across the luxury world were hurt by a slowdown in Asia and currency volatility.

Friday was also the big day for British talent Paul Surridge. He made his maiden showing in Milan since being named creative lead at Roberto Cavalli, known for its exotic prints and pioneering the sand-blasted jean look.

It was big on slinky monotone dresses with see-through sections, zebra-print trousers and vests as well as flowery, flowing gowns.

On the outdoor runway set in a Milan park, there was also some classic evening wear mixing leather and light fabrics, as well as massively oversized chrome-coated sunglasses.

“I tried to dig deep to find a new sensuality, which I think is missing in women’s fashion today and to try and pioneer a new look as Mr Cavalli did in his origin,” Surridge told AFP backstage after his show. – Rappler.com