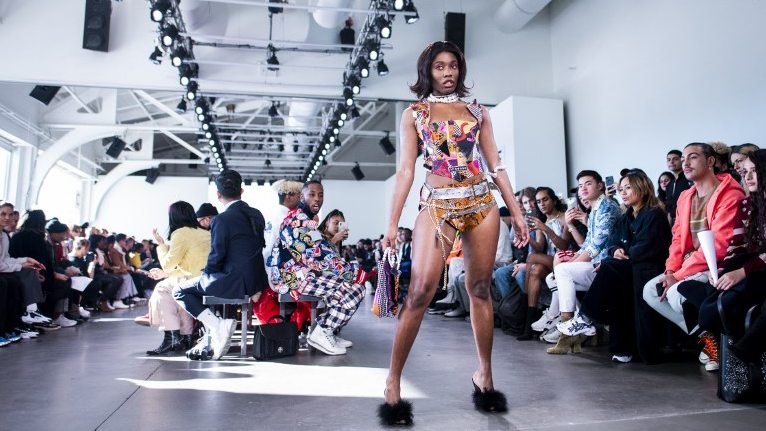 NEW YORK, USA – Los Angeles designer Pierre Davis  made her debut in New York this week, becoming the first openly transgender creator to present a collection at Fashion Week, further shaking up an event that had already featured trans models.

The powerful Council of Fashion Designers of America (CFDA), which says it represents more than 500 creators and has made diversity its battle cry, announced last month that Davis’s No Sesso brand would be “making NYFW history” at Monday’s event, which opened with a parade of whimsical garments on February 4.

Fashion Week began with a focus on men and will turn to women’s wear on Thursday, February 7.

Davis told CFDA that she hopes the brand “will inspire people to be more community-minded and to realize not everything is just about aesthetics or commerce. It’s also about humanity.”

She added it is important “that people of all intersectional identities are given a fighting chance regardless of their identity. The playing field isn’t level in the world, and it is even more difficult in fashion.”

While she embraces her identity as a trans woman in the design field, Davis doesn’t want it to be a gimmick, telling AFP it’s important for people to see the creations and for them to be recognized.

“I just want to show the work,” she said of the agender brand No Sesso, which was launched in 2015 and –according to CFDA – counts fans including R&B artists Kelela and Erykah Badu.

“I am just humble and happy that I got to show at Fashion Week,” Davis said.

For her Chapter 2 collection – she calls them “chapters” rather than seasons – Davis came up with the idea of a wardrobe that blends the sartorial codes associated with the two sexes.

The wardrobe mixed the formalism of work attire with sportswear, producing a jogging jacket with epaulettes, for example.

Davis emphasizes that the label is “very much an LA brand,” adding: “We’re super-fun and easy to be around.”

“The show is inspired by business wear and evoking the spirit of the Glamazon regardless of gender,” Davis told CFDA. “It’s about making things happen even when there seems to be no way.”

Now, with her first New York show, Davis says everybody “can see No Sesso and the world we’re creating.” – Rappler.com