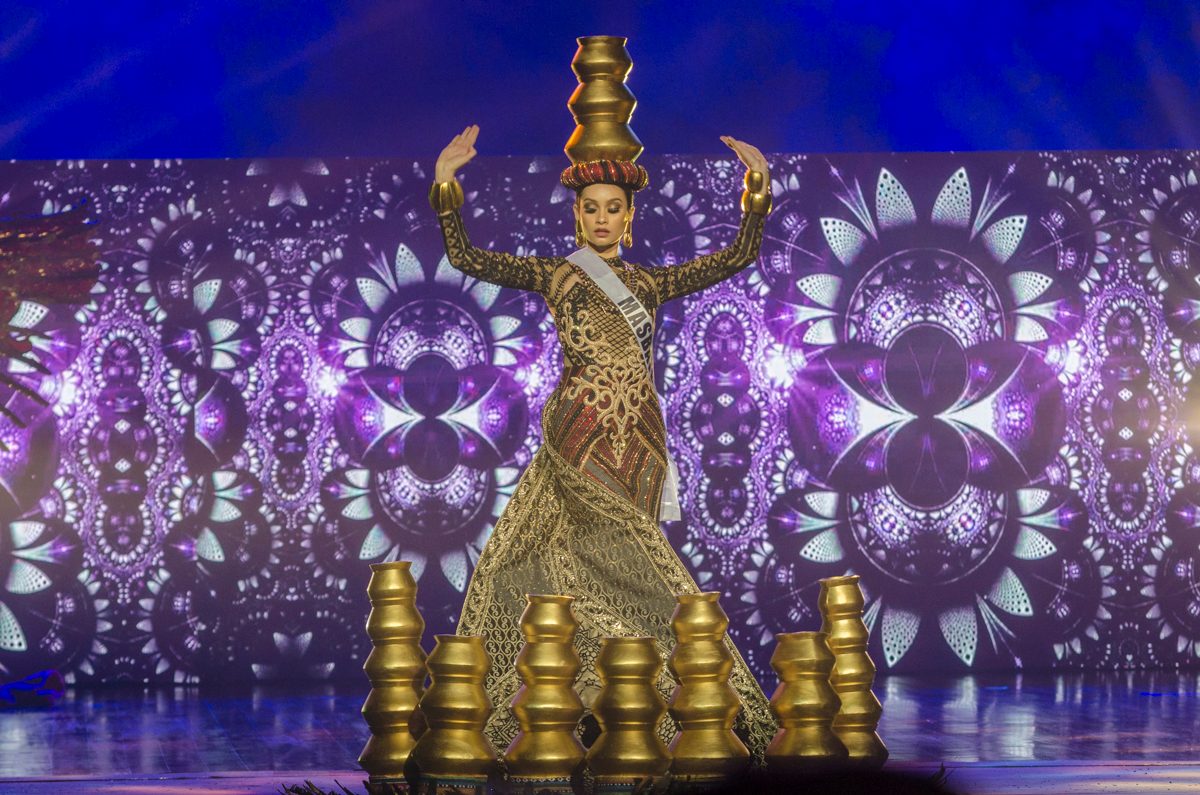 MANILA, Philippines — Designer Benj Leguiab IV took to social media on Saturday, June 1 to explain the story behind the national costume he designed for Binibining Pilipinas 2019 Masbate bet Hannah Arnold. Indonesian fans had accused the beauty queen of wearing a costume similiar to that of a previous Miss Indonesian candidate.

Indonesian fans pointed out that Hanna’s costume, which had bangas (jars) on the trail of the costume, was similar to that of Miss Grand International Indonesia 2017 Dea Rizkita. While Hannah’s costume had banggas, Dea’s was trail that of Indonesia as a whole called “Motherland.”

Benj wrote: “First of all, I would like to know everybody that this National Costume was inspired and conceptualized purely from the heritage and rich culture of Cordillera.

“The banga concept was inspired by the Lady who [is] selling bangas on their house yard, placing the banga on the banig which [is] one of their source of income. In 1860, women in Kalinga started to make their own way to help their families even they are at home like selling bangas, abaniko, banig and other tools for daily lives.”

Benj also explained the importance of the banga – how it is used to fetch water and how it has also become a symbol in the country. He said that the costume was also inspired by Apo Whang-od, the famous mambabantok or tattoo artist from Kalinga.

“She is considered as Cordillera’s and even the country’s pride because of her worth emulating tattoo designs that embody her work of art. Her designs include prayers symbol, skin snake and mountains.

“Lastly, the chicken feathers as a costume accessory, chicken in the highlands is a symbol for them as a rich delicacy of the Cordilleras,” he said.

With the costume, Benj said he “hopes to inspire everyone to appreciate our heritage.”

“Remember that even the smallest of places can make a mesmerizing impact to every Filipino.”

On Thursday, May 30, Hannah addressed the issue on Instagram.

“All of us candidates were given blocking on stage and all of my movements were intentionally done as cultural dance and to completely show the tattoo designs of Apo Whang-od… I have seen a lot of comments saying we have copied Miss Dea from Indonesia. Honestly speaking I never watched the pageant she was in, so have never seen a costume or performance like this before.

“I hope that pageant fans from both countries will stop bringing other women down and will be proud of the national stories us candidates are trying to share through our costumes.”

So over the moon to be chosen as one of the top 10 for “best in national costume” in my Northern Luzon inspired costume by Sir Benj @benjleguiab_iv ❤️ I want to say a huge congratulations to all Binibini’s and their designers for showcasing such beautiful, intricate and creative designs depicting the land we call home: The Philippines. • Please do head to  https://.VOTE.BBPILIPINAS.com and vote for your favourite National costume ❤️ Thank you everyone for all of your support, I truly felt the love last night as I was up on stage ❤️ • Hair and make up by @ricciconde of @davidsalonph Artwork by @the_krakenn Styled by @styledbypatrickhenry  Accessories by @arnelpapa Choreography by @ito_juanito  #BbPilipinas2019 #BeyondBeauty #HannahBees #Masbate #OHannah #KoronaHANNAHyan #angitinadHANNAH