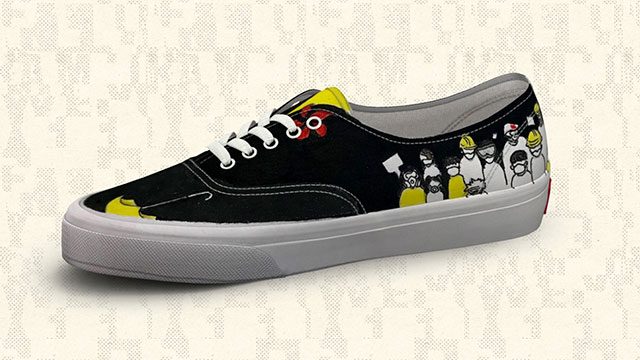 Facebook Twitter Copy URL
Copied
Vans says that they 'have never taken a political position and therefore review designs to ensure they are in line with our company’s long-held values of respect and tolerance, as well as with our clearly communicated guidelines for this competition'

MANILA, Philippines – Hong Kong protesters have called for a boycott of American skateboarding brand Vans, after the company removed an anti-government shoe design submission from its annual sneaker design competition.

After Vans pulled out the submission from its website on Saturday, October 5, online users, in an angry frenzy, began sharing videos of them throwing their Vans sneakers in the trash and burning them and urged everyone else to boycott the brand, according to a Bloomberg report.

On the same day, Vans issued a statement on its Facebook page, saying that they “have never taken a political position and therefore review designs to ensure they are in line with our company’s long-held values of respect and tolerance, as well as with our clearly communicated guidelines for this competition.”

Vans also stated that it is “committed to enabling creative expression and the Custom Culture Competition brings our purpose to life by engaging and supporting individual artists worldwide.” In return, Vans hoped that all participants and artist around the world would use the platform to “celebrate creativity and spread positivity.”

Vans confirmed that a “small number of artistic submissions have been removed,” based on its decision to “uphold the purpose of Custom Culture.” It did not specify which submissions were removed.

“We greatly appreciate the effort that every single artist has made to contribute to this forum, and we look forward to many more contributions from our fans and consumers around the globe,” Vans said.

The annual Vans Custom Culture competition invites artists from all over the globe to submit their own Vans sneaker designs. The winner is determined via online voting and will receive a cash prize of $25,000 dollars and manufactured sneakers of his/her design by Vans.

This year’s ongoing Hong Kong protests were sparked by a proposed extradition law,  which that would allow extraditions to any jurisdiction with which it does not already have a treaty – including mainland China.

While Hong Kong Chief Executive Carrie Lam had withdrawn the controversial bill in September, protesters have carried on with their mass action to defend democracy in Hong Kong. – Rappler.com